Khabib Nurmagomedov who still holds the lightweight title retired from the sport of Mixed Martial Arts last year following his submission win over Justin Gaethje at UFC 254 in Abu Dhabi.

Khabib Nurmagomedov stated that he has retired from the sport because he promised his mother that he wouldn’t fight without his father in his corner. His father Abdulmanap Nurmagomedov passed away last summer following complications regarding Covid-19. 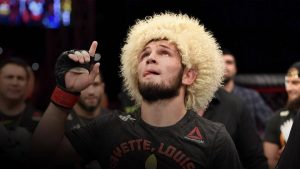 “Today I want to say this is my last fight. No way am I coming here without my father. When UFC called me about Justin I spoke with my mother for three days.

“She didn’t want me to fight without father and I said this is my last fight – and I have given her my word.

A legacy like no other! Thank you @TeamKhabib #UFC254 pic.twitter.com/GGqpGjJluR

“Thank you so much Justin. I know you are great, I know how you take care of your people. Be close with your parents, because you never know what is going to happen tomorrow.

“Thank you coach, thank you guys. Today is my last fight in the UFC. It was my father’s dream. Justin and Conor will fight in January, I have choked both out, I am not interested in this.” Khabib Nurmagomedov said following his retirement at UFC 254.

Dana White meets Khabib Nurmagomedov to convince him to unretire

While Khabib had announced his retirement, UFC president Dana White was convinced that he can still bring back Khabib for one last time to make it 30-0.

“When I left Abu Dhabi last time, and Khabib and I were texting, we went back and forth on why I think he should keep fighting,” White added. “He was super emotional coming out of that fight [with Gaethje]. He’s had time now to rest, think about it, all the other things. This is going to be a five-minute conversation. … I think he’ll fight, but we’ll see. It’s not going to be an argument or a lengthy conversation. It’s going to be a ‘yes’ or ‘no.’” (H/T- MMAJunkie.com)

Do you guys think Khabib Nurmagomedov will come out of retirement?