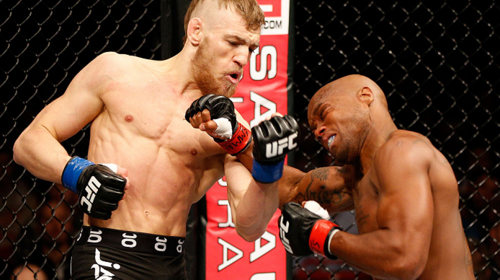 If you intend to become a mixed martial artist, the path you’re going to embark upon will be a very long and arduous one. It might take you well over a year just to get a strong base in all the various forms that are involved in MMA. Nothing is going to come your way just by waiting and pondering over it. The very first step is to sign up at a good MMA gym and show up day in and day out. There are going to be rough days, days where every muscle of your body will ache and you feel like giving up. Remember your first step and push yourself to take the other leading steps. Most of the top mixed martial artists have had their very first steps taken when they were just kids. Some had the calling when they were well past their 20’s. Whatever be the age, it’s your decision to take this journey is what matters. With each passing session, your confidence will grow and your motivation to learn new things will increase.

When you paint a dragon, dot its eyes (Chinese Idiom)

The legend behind this idiom explains a story of a child painter who drew magnificent dragon paintings. His dragons in the paintings would come alive once he would finish drawing their eyes by painting black dots for the pupils. At one occasion, citizens gathered to see the talented child’s painting. One of the audience members mentioned that the dragons did not have eyes. To which the child replied: “If I draw the eyes, the dragons will come alive” and he proceeded to draw them, adding final touches to his painting. And, behold the paintings did come alive.

Learning any martial art such as Kickboxing, Brazilian Jiu Jitsu, Muay Thai or Wrestling can be an overwhelming experience. You tend to get carried away with the excitement of learning a new technique, a new move and lesson behind it that you can forget the underlying principles that make it work. Only by applying these underlying principles such as the right balance, proper posture, seamless technique and breathing that you can execute the perfect punch, transition and combination. Remember that these simple yet important principles are the underlying finishing touches that will bring to life what you had started.

A professional MMA fighter’s approach towards his/her next scheduled fight is like the ancient warriors – disciplined, dedicated, focused and with a purpose. There is so much at stake that, without this one cannot risk going into the fight. You cannot avoid one part of the training just because it is taking you that long to get hold of it. Take challenges head on and continue to move forward with the warrior’s mindset. Apart from your training sessions, there are other areas that also need your focus and attention – your personal life, family & friends and for some juggling between jobs & training sessions. Taking time off and having a good relaxing day surely can spring you back with rejuvenated energy but without a focused approach, things can go haywire.

Martial arts is not something that can be learned easily in a month or a year. The process of becoming an expert requires you to repeat the same movements thousands of times either alone or with training partners. Only after you practice a kick or a movement numerous times you will drill it into your muscle memory. If practice is denied or diminished, no amount of talent is going to take you to expertise. Do not feel impatient or become discouraged with your slow progress. Only after you’ve performed a movement correctly 10,000 times will it come naturally to you. Give your body time to learn what your mind already understands. Champions have spent countless hours shadowboxing, rolling on the mat and kicking the heavy bag.

A fight is not won by one punch or kick. Either learn to endure or hire a bodyguard (Bruce Lee)

Endurance is the ability to tolerate an unpleasant or difficult situation without giving way and having incredible endurance is one of the most critical elements of any MMA fighter’s arsenal. MMA fighters’ training camps are always geared towards going the distance – be it 3 rounds or 5. One cannot train to last for a minute or a single round and rely upon a puncher’s chance to win the fight. You wouldn’t want to be called the fighter who ran out of gas, do you? A perfect example would be the Diaz Brothers – who have extraordinary endurance levels, thanks to their triathlon competitions. Having superior endurance levels can be the difference in your fight game.  Yes, it is one of the most difficult disciplines to master, but it is to the one who endures that the final victory comes.

Cry in the dojo. Laugh on the battlefield (Samurai Phrase)

If the meaning of this quote is to be taken literally, then you wouldn’t want to be the one laughing in the ring/cage – that’d be awkward. What it simply means is the harder you train in the gym, the easier it will be in the actual fight. You must keep sharpening your skills with your training partners, perform those drills thousands of times, land yourself in uncomfortable situations, make your training difficult and outlandish to grow stronger physically and mentally. If you train any other way, you’re fooling yourself and wasting your time. Weak and sloppy technique in training will be of no use in the heat of combat. But having given 100% in training, you know you did all you could and are confident wherever the fight goes. Muhammad Ali famously quoted “I hated every minute of training, but I said don’t quit. Suffer now and live the rest of your life as a champion“. If you train with fire in your belly, with a strong will and knowing that your opponent is also training hard to hand you a loss, then that is how you’re going to perform on fight night.

Most fighters resort to hate and take the anger road to pump themselves up for the fight. For some, it might work but in most cases, has been the reason behind their downfall. Gilbert Yvel, Junie Browning, Paul Daley probably top the list of the fighters with anger issues. Fighters who compete with an angry mind get nothing out of it and when they lose, it only gets worse. Surprisingly, some of the best MMA fighters compete with a calm and composed mind. One name that reminds us is that of the heavyweight legend, Fedor Emelianenko, who never lost his cool or resorted to angry behaviour during the build-up of any of his fights. Fighters who maintain composure have the edge over their opponent. They have better clarity, can identify their opponents’ mistakes, make the right decisions and adapt well during the fight.

The law of attraction simply states that ‘we attract into our lives what we think about most of the time, good or bad’. Focusing your thoughts on the things you want to achieve with enough self-belief behind it, will ultimately get you there. However, if your thoughts are always on the things you don’t want in your life, then you end up bringing them in. The struggle is real for any MMA fighter and when things are not going in your favour is when you need to visualise the good things that you want. Connor McGregor is a big believer in the law of attraction and a living example too. Before he made it in the UFC he was collecting welfare cheques at the local unemployment office in Dublin. According to Connor, “if you have a clear picture in your head that something is going to happen and a clear belief that it will happen no matter what then nothing can stop it. It is destined to happen. It’s perfect.” It all starts with the right mindset and having a positive outlook that you will one day achieve what you’ve set out for.

What’s the difference between a fighter and a martial artist? A fighter trains and fights with a simple purpose; to beat the opponent and win the fight. To prove to the whole world that he/she is much better than the opponent. While winning is a good habit, having your entire focus on it can lead you astray from the journey you’ve embarked upon. Martial arts is not about being better than your training partners or your opponents. It is about improving yourself as a person each day one step at a time. Your goal should be to improve your technique, your knowledge and how to apply the same. This philosophy of improving yourself is what separates a true martial artist from a fighter. When asked if he is a fighter or a martial artist George St. Pierre replied “a fighter is training for a purpose, he has a fight. I’m a martial artist. I don’t train for a fight, I train for myself. I’m training all the time. My goal is perfection, but I will never reach perfection“.

It is said that you’re only as good as your last fight and if your last performance was a loss then that is how most people are going to remember you. A loss can be devastating for an MMA fighter in today’s tough competition. It can bring you down through the rankings, make you wait longer for the title shot and makes the comeback journey even tougher. To make things worse, what if you lost three fights in a row? Is that the end? Are you done? NO, that is not how your story should end. For every time life handles you a loss, learn from it and come back stronger. Many greats have lost multiple fights in a row and have come back with a bang. Fedor Emelianenko lost three fights in a row and is now on a five-fight win streak, Mirko Crocop won K1 and the Rizin titles, Dominic Cruz was sidelined by injuries but came back to win the title. That is what separates the champions from the ordinary. Every time, you fall, you get to learn from it and get an opportunity to stand right back up. How you deal with the loss and bounce back is all up to you.