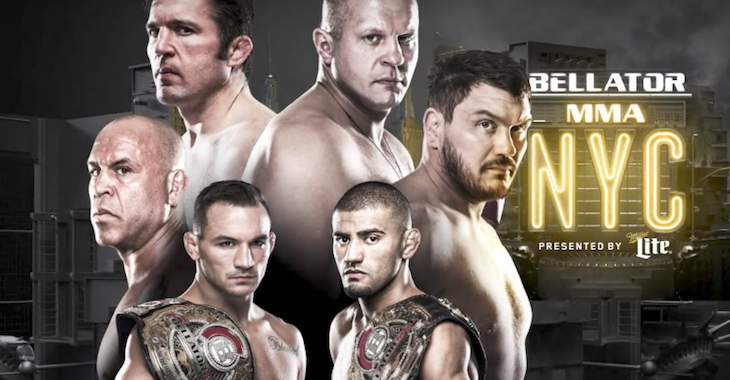 BELLATOR’S BIGGEST AND THE MOST STACKED CARD EVER 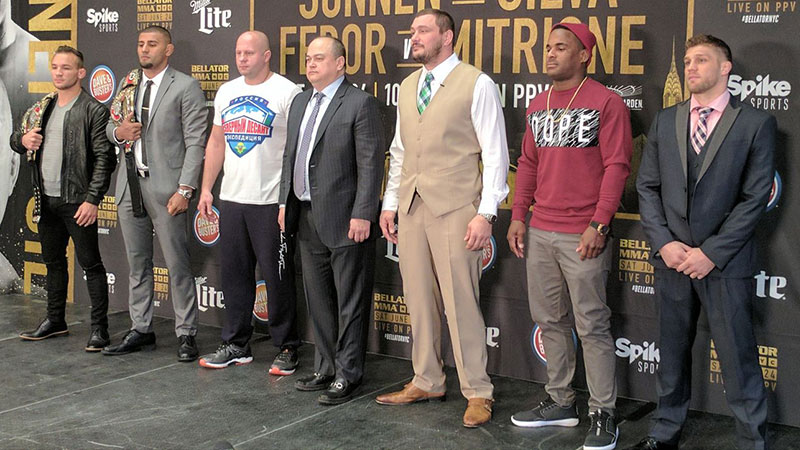 Scott Coker has put together the biggest event that Bellator has ever produced since its inception in 2008. The PPV event is going to take place at Madison Square Garden – the Mecca of Combat Sports in New York City for the very first time. The card features fourteen fights, with two title fights, the return of Fedor Emelianenko, the debut of two new talents and the most heated grudge match ever in the history of MMA. Audience get to witness two events in just one night with Bellator 180 airing on SPIKE and the NYC card being a PPV event.

Bellator is leaving no stone unturned to make sure the promotions are on point and the fighters get the required exposure to make a name for themselves. The high quality of promotional video content Bellator has put out there is by far the best from their production team. Fans are also invited to the Q&A sessions with four MMA legends along with the fan fest.

Fans will be delighted to hear some familiar voices behind the mic at Bellator’s NYC event. The organization has brought in Mike Goldberg and Mauro Ranallo – the two of the best announcers in MMA business. Both the veterans signed a multi-event broadcast agreement that begins with Bellator 180 and NYC event. Goldberg was last heard on December 31 at UFC 207 and while Ranallo has been busy with the WWE, Showtime Boxing recently.

“Mike Goldberg and Mauro Ranallo are two of the best in our business and I couldn’t be happier about them joining the Bellator family,” Bellator President Scott Coker said in a release. Adding to it the Spike Senior VP of Sports and Specials Jon Slusser said “The addition of highly-regarded announcers Mauro and Mike to our fantastic lineup of broadcasters, and our first-rate production led by Scott Fishman, further demonstrates our commitment MMA fans and expanding the global Bellator brand.” 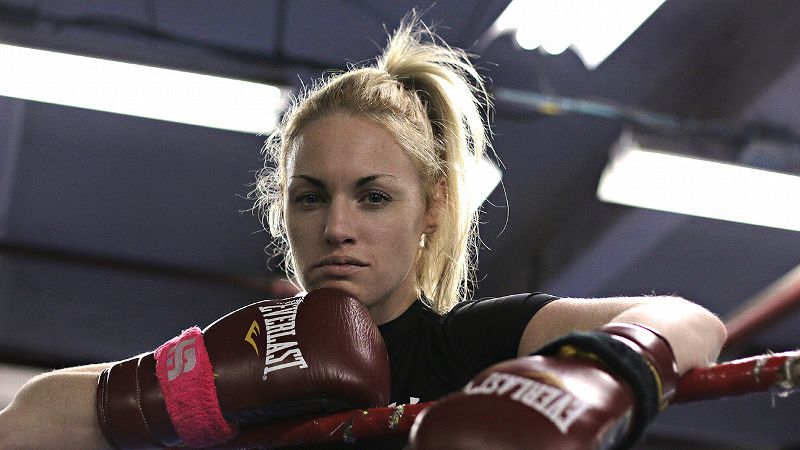 Heather ‘The Heat’ Hardy – the WBC international female super bantamweight champion who made a huge name for herself in the world of boxing has now shifted her focus to MMA. Her accomplishments in boxing include riding a 20-fight win streak, holding two division WBC Champion Belts (Super Bantamweight and Featherweight), receiving the WBC belt in the first televised women’s boxing match in almost 20 years and becoming the first woman to box professionally and be put on national television in almost 15 years.

The 35-year-old Brooklyn native was earlier scheduled to make her MMA debut in January 2017 at Invicta FC 21, but her fight had to be cancelled as her opponent pulled out due to an injury. Heather was not deterred by this set up, instead things started to fall in place as she was signed by Bellator to be part of their NYC event in her home town and later her fight moved up to #6 spot. Hardy faces a much experienced 38 year Alice Yauger (4-5) at flyweight, who lost her previous fight against Jessica Middleton.

THE ANTICIPATED MMA DEBUT OF AN OLYMPIC HOPEFUL AARON PICO

Scott Coker, the visionary who is known to provide platform for many budding talents continues to do so by bringing in the young stand-out freestyle wrestler – Aron Pico for the June 24 event. The 20-year old is a former cadet world champ, two-time junior world medallist and Olympic Trials finalist who makes his lightweight debut against Zach Freeman (8-2). Despite debuting against an experienced MMA fighter, Pico is confident that his own wrestling, pankration and boxing experience would be all that is needed to upset his opponent.

Aron Pico has been hailed as the next prospect to watch out for as he continues to hone his boxing skills at the renowned wild card gym under Freddie Roach, jiu-jitsu game with Eddie Bravo and MMA training with American Kickboxing Academy coach Bob Cook. He is also a California State Junior Golden Gloves Champion with 30+ amateur boxing matches under his belt. 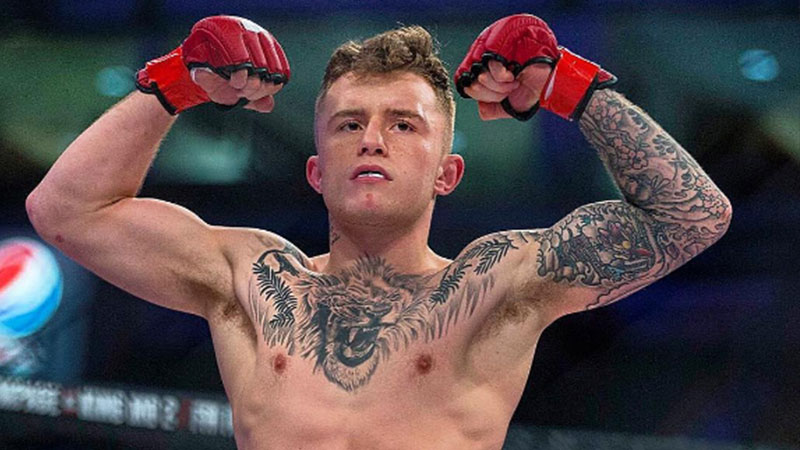 The undefeated Featherweight has two few things in common with Connor McGregor – They’re both from Ireland, have animal tattoos on their chest and train at SBG Ireland. But that doesn’t mean James gets the same attention as Connor does. Instead the determined ‘Strabanimal’ knows that to be more successful than his countryman, he must break all those records and get the featherweight title before he turns 22.

He meets 40-year-old Chinzo Machida, the elder brother of former UFC Light Weight Champion Lyoto Machida, who is on a four-fight win streak. For Machida age is just a number as he keeps getting better with each fight. 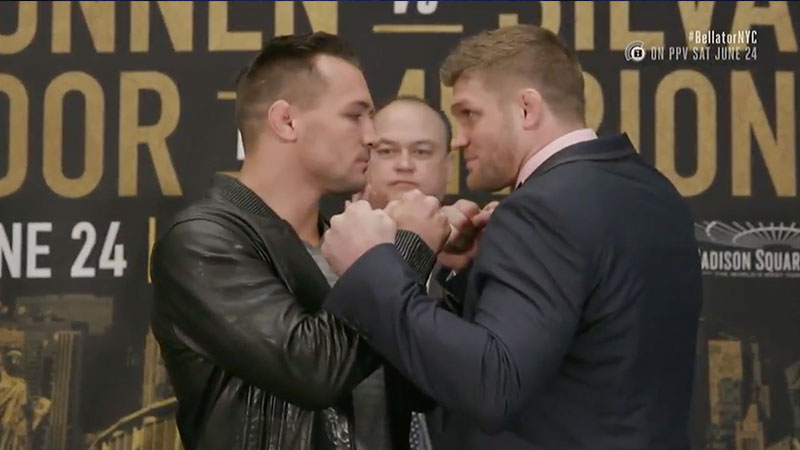 Michael Chandler reinvented himself after his three-fight losing skid back in 2014. Since then he has been nothing but an unstoppable force knocking out and submitting his opponents. His last outing against Benson Henderson for five rounds resulted in a split decision victory earning him the lightweight championship belt.

The two-time champion looks to defend his title against the undefeated and submission specialist Brent Primus who knows this is his chance to dethrone the king of lightweight and make a name for himself in MMA.

Lorenz Larkin makes his Bellator debut against Welterweight champion Douglas Lima to challenge for the title. Having turned a free agent since his departure from the UFC, Lorenz Larkin was brought in by Scott Coker to immediately face their defending champion Lima. This is a perfect opportunity for Larkin to get that belt ahead of other welterweights and make it the biggest moment of his career winning at the MSG.

Douglas Lima has won 10 of his 12 appearances in Bellator, won seven of his last eight fights, and is a two-time Bellator champion who has never fought five rounds inside the Bellator cage. Lima won the rematch and got the title back by knocking out the then champion Andrey Koreshkov. The winner of this fight is sure to go against the red king – Rory McDonald in the late 2017 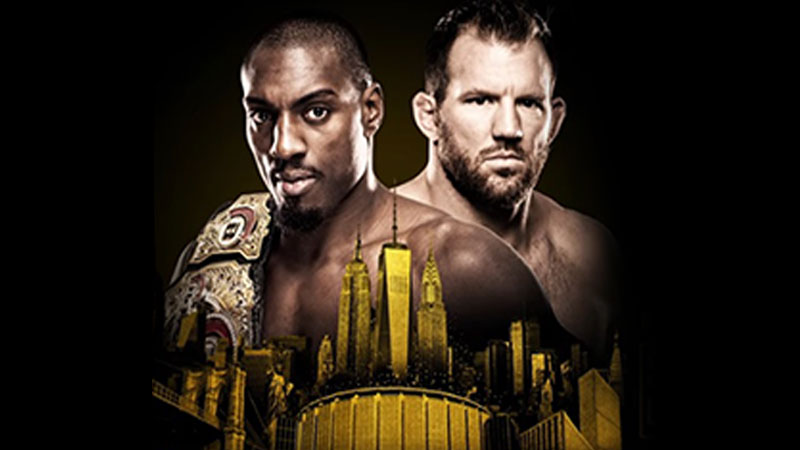 The last time both the light heavyweights fought each other, it was in the UFC back in 2015 where Ryan Bader won the split decision. Two years later, Phil Davis gets the chance to redeem the loss and defend the title in the same night against the tough Bader. For two years Phil Davis has been tearing apart Bellator’s Light Heavyweight division by defeating the likes of Emanual Newton, Francis Carmont, King Mo and Liam McGeary.

The lightweight belt has always been elusive to Ryan Bader when he competed in the UFC, but his lifelong goal can become a reality if he manages to defeat Phil Davis again at MSG. Their first meeting inside the cage was a lacklustre performance and failed to draw attention, but both the fighters promise that this time around its going to be fireworks.

THE RETURN OF FEDOR EMELIANENKO TO THE STATES

It’s been almost six years since Fedor Emelianenko last fought in the United States, something that fight fans have been dreaming for so long. During these six years, he has competed in Dream, M-1 Global, Rizin FF and EFN. Every time Fedor Emelianenko is scheduled to fight in the states, MMA fans erupt with mixed reactions. Some say he’s evading the UFC’s heavyweight roster, while others would still watch him fight and deliver a stunning performance.

He stayed retired for three years and when he announced his return, fans were anticipating he would for sure sign with the UFC this time. Instead, Scott Coker announced that Fedor signed with Belaltor would be part of their heavyweight roster. This time he compete against the heavy handed and athletic Matt Mitrione, who has competed fourteen times in the UFC and has wins over Gabrial Gonzaga, Derrick Lewis Shawn Jordan.

THE GRUDGE MATCH 7 YEARS IN THE MAKING: CHAEL SONNEN VS. WANDERLI SILVA 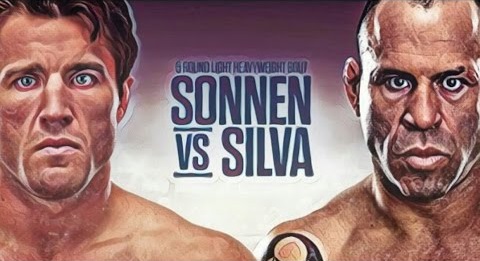 The Axe Murder is finally back after a four-year long absence from MMA and the reason for his return is none other than the Gangster Chael Sonnen. The rivalry between the two began way back when Chael made some nasty remarks against Brazil and its fighters. Wanderli Silva confronted him and so began a back and forth barrage of smack talk which eventually led to a scuffle between the two at a public event.

The rivalry took another level when the two coached on the third season of The Ultimate Fighter: Brazil. Seven years on and the hatred has only grown to such an extent that Wanderli Silva purposely skipped two conferences to promote the fight just to avoid any confrontation in the public. Chael on the other hand kept his mouth do the work every time he got the mic in front of him.