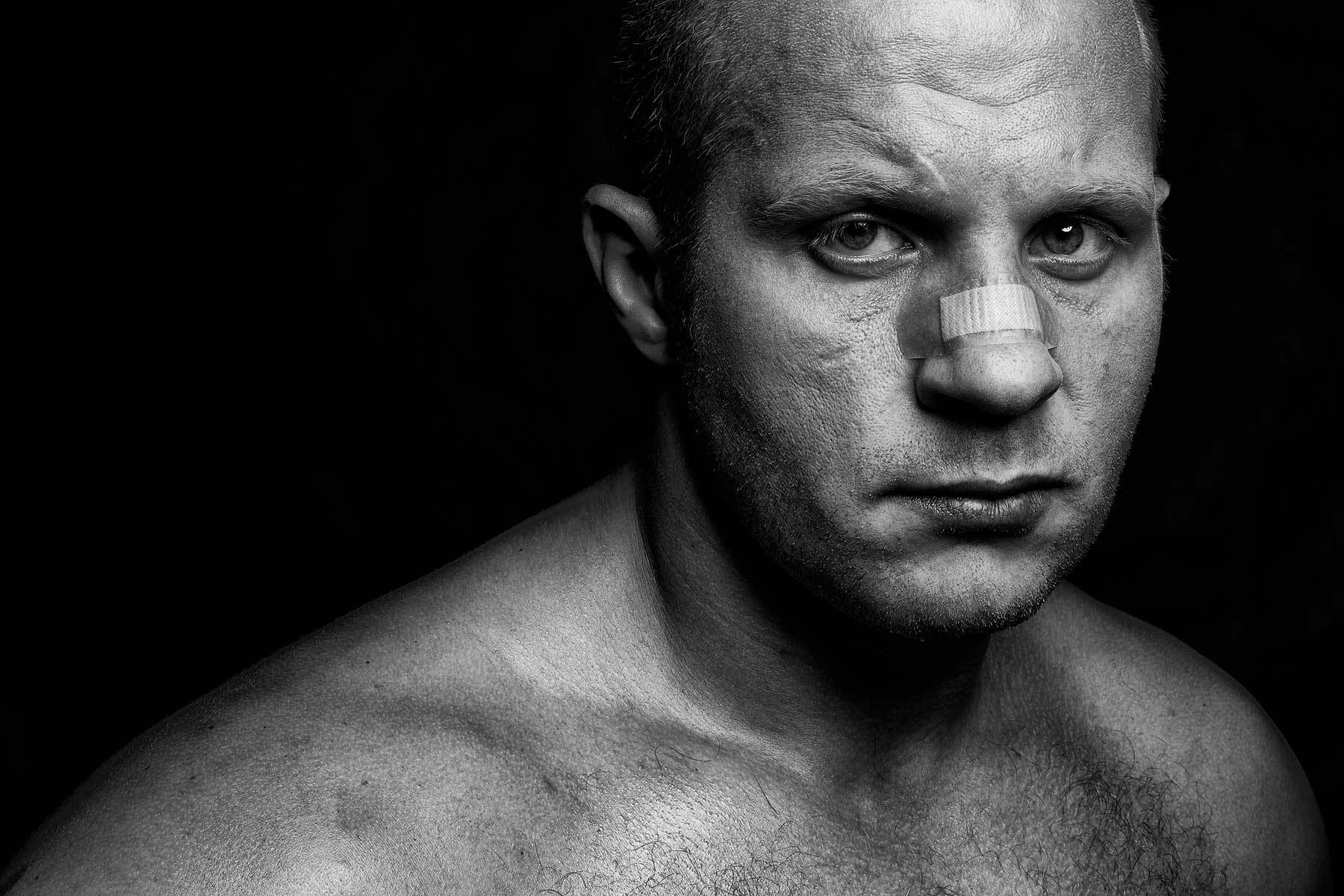 The Last Emperor ‘Fedor Emelianenko’ needs no introduction when it comes to mixed martial arts. In a career spanning 17 years, he’s given some of the most memorable fight performances, been an invincible force, dominated for a decade and looked classy even in defeat. No other heavyweight has garnered such a huge fanbase as Fedor and despite his not so stellar performances in the past couple of years, fans continue to acknowledge him as the greatest of all time. Let’s look at the 10 things you’ve never seen Fedor do in his entire fight career.

Fedor developed an elite ground game through his solid base of judo and sambo. He could easily stuff and defend takedowns from wrestlers and BJJ guys alike. A look at Fedor’s fights and you can rarely find him going for that single or double leg take down. Instead he prefers the upper-body takedowns, which are almost impossible to sprawl to. When he feels like taking his opponent down, Fedor would strike first then get in close range, get a hold of the opponent’s upper body and then take them down. In fact, he has never attempted a double leg takedown in his entire MMA career. The only time he did execute it was against Egiddijus Valavicius & Mark Hunt (a sloppy single leg take down attempt). Fedor explains in one of his training seminars that he personally does not like single-double leg take downs. His explanation – by doing so you exert energy, burden the back, legs and get tired easily.

Fighters who come in with a game plan, play it safe and just do enough to get a win kill the excitement that comes with a MMA match. Fans and the audience spend their $$ to watch PPV, live events and they want the fights to be anything but boring. Sometimes even with good striking and ground skills all that the fighters do is be cautious and try to win via points.

Fedor on the other hand never gave a boring fight in his entire career and always started the fight throwing heavy shots and jumping fearlessly into the opponents’ guard. In his-own words Fedor doesn’t like lay and pray during the fight and thinks many fighters do that without delivering fans the exciting fight they deserve. It is always entertaining to watch Fedor fight because he is not afraid to get hit and always goes out wild hooks and over right hands. He finishes the fights in a dramatic fashion, which makes his fights even more entertaining. Even in his recent fight against Fabio Maldonado, there was never a moment where you feel he was taking the easy route.

Of late trash talking has become a go-to-gimmick to promote a fight and no one has done it better than McGregor. Take the tweeting trend, where fighters engage in verbal warfare, openly cursing and degrading each other. Many MMA fighters don’t have good things to talk about other fighters when they don’t get the title shot or get sidelined. Some argue that it’s the fight business and you’ve got to hype it up and promote it by running your mouth.

You’ll never find Fedor speaking trash about his opponents, even when his opponents try to speak ill of him, Fedor doesn’t respond to trash talk and prefers to ignore it. When asked what he thinks about his opponents Fedor responded by saying ‘I respect them without expectations’. He understands that it is all part of show business and how some fighters prefer it to sell their fights. Even during the time leading up to his fight, he would only acknowledge his opponents’ strengths rather than criticize or bash them.

When your fans and the world recognize you as a professional athlete, you must act like a pro representing your sport. We’ve witnessed how Nick Diaz missed the press conference, Rampage dry humping a reporter (and a tiger), Brock Lesnar pushing a cameraman during his post fight walk out and Anthony Johnson missing weight a few times. Some fighters even cross the line of being unprofessional like Bisping spitting at his opponents corner, Frank Mir’s unkind words towards Brock, Paul Daley’s sucker punch and the numerous cases where fighters have taken banned substances for their fights. Serious fans do not appreciate it and such acts will not only get the fighters a bad rap but also MMA.

Fedor lives up to his nickname and his actions are like a true emperor. He is one of the most humble, down to earth and media friendly people in MMA. He has never misbehaved or even come close to being rude to journalists & reporters. Watching his interviews, the first thing that you will notice is his humbleness. He knows he is representing a combat sport and that he needs to conduct himself professionally. Despite all his victories, prize money, fame and love he has never behaved unprofessionally.

Martial Arts is a noble art form that has been passed down from one generation to another. MMA is no different; fighters are expected to be professional and respect their opponents. But sometimes fighting in big organizations and in front of huge audience can be overwhelming. Fighters get intimated, emotional & lose their cool and even act like jerks. Anderson Silva disrespecting Demian Maia, Lesnar riding Herring’s back, Nick Diaz’s regular verbal insults during the fights and Brock Lesnar getting into Mir’s face & showing the middle finger to the fans are some of the most disrespectful things that happened in MMA.

Fedor is a true sportsman and always competes in a true sportsmanship spirit. He doesn’t believe in showboating or disrespecting his opponents. Fedor rarely shows any emotion during the fights, he always seems to have that stoic look throughout the fight; that shows how calm, collected & focused he is during his fights. In fact, no opponent would even think of mocking if his opponent were Fedor. During his title defense against CroCop in Pride you can see how Fedor gives a helping hand to CroCop after the final bell rings. Watching Fedor loose his cool and act like a jerk is something that you will never see.

Rarely one can notice Fedor’s emotions during his fights – be it when throwing powerful strikes or taking shots from them, emotions are hard to find. While many fighters psyche themselves backstage, enter the fight filled with anger and hate; Fedor never feels anger and doesn’t feel the need to inflame himself before the fight. Many believe this comes from his tough childhood days and harsh weather conditions of Story Oskol. His entrance says it all about his mind set. Calm, cool, collected and ready to unleash. The closest you can find him displaying his emotions are some of his back stage loud grunts that he used to make before his entrance. Same goes during the win, when other fighters do a back flip from the ring and climb the cage when they have won the fight, Fedor on the other hand celebrates with just a smile and raising his hand.

What do you do when you get hit hard? Make faces; show the pain you’ve felt or take a step back. Taking a hit and still going strong is a champion’s trait. It’s not about how hard you can hit. It’s about how hard you can get hit and still move forward’. This Fedor proved multiple times: the suplex from Randleman, his nose getting cut with Brett’s opening punch, when he got mauled by big foot Silva on the ground and being rocked by Fujita. Fedor to this day maintains his stoic look during his fights let alone show any sign of being hurt. His last outing against Fabio Maldonado saw him on the verge of being taken out, but Fedor being Fedor survived the round and came back stronger only to win a controversial decision. Fedor’s ability to take pain, a beating and still win the fight is what sets him apart. He just wipes off the blood and goes in for the kill.

Ever since Fedor began competing in MMA, Vladimir Voronov and Alexander Michkov have been his long-time trainers. They rely on the old-school training methodologies of long distance running, hours of technical striking, grappling and sparring sessions. The only equipment Fedor has been seen using are the free weights. He even had the same sparring partners in most of his fight preparations. To work on his stand-up skills, Fedor often moved to The Netherlands, where he trained with the likes of Ernesto Hoost for specific fights. Off late he has been training with Peter Teijsse who has somewhat tried to incorporate new training methods in the days leading up to the fight. For years’ fans criticised his choice of training in Russia rather than bringing in new training partners and methodologies, which could improve his fight game.

Michael Schiavello’s ignorant claims about Fedor wanting to have the bus all for himself after the fight on New Year’s Eve against Satoshi Ishii were not true after all. Thanks to Matt Hume and Bibiano Fernandes who were part of the New Year’s Event and cleared up the confusion. During his reign as the PRIDE heavyweight champion, Fedor never acted like a diva nor did the fighters or any commentators make such claims.

Will he ever fight in the UFC was a question that was a mystery couple of years back. But more than ever, Fedor has made it clear that competing in the UFC does not interest him for the obvious reason – Dana White. Ever since Pride was consumed by UFC, fans have been anticipating Fedor’s move to the biggest MMA organization of the world. The dream matchups with Brock Lesnar, Cain Velasquesz and Alistair Overeem fell apart. After his comeback in Rizin FC, fans were hoping that the next fight would be in the UFC. But failed negotiations and unagreeable terms led Fedor to sign up with Bellator, where he is scheduled to fight against Matt Mitrione at Bellator 180 on June 24 in New York City.

Previous articleBellator 180 NYC the biggest so far
Next articleUFC Women’s Flyweight: A division waiting to be unleashed