UFC: Sage Northcutt thinking to move back up to the Welterweight Division 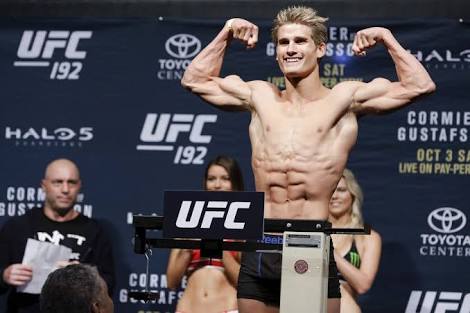 Recently on March 1,2018,the Young sensation ‘Super’ Sage Northcutt turned 22 and received a warm wish from the UFC Lightweight Champion Conor McGregor. Northcutt was also fresh off a win against Thibault Gouti at Fight Night 126.

Northcutt first made his much anticipated debut on October 3, 2015 at UFC 192 in his native state of Texas.Northcutt was just 19 years old at that time making him the youngest fighter on the UFC roster at that time.

He also became the the third youngest fighter to ever debut with the UFC. Only Dan Lauzon and Sean Daugherty were younger than him while making their debuts.

Northcutt defeated Francisco Trevino via TKO in just under a minute.Northcutt was discovered on Dana White’s Looking for Fight series where he had an impressive win via rear-naked choke, impressing White and landing himself a UFC contract.(via YouTube):

Recently in an Interview with Bloody Elbow,Northcutt discussed a probable move to the Welterweight division.He said(via Bloody Elbow),”Believe it or not, I’m actually planning on moving up to 170 for my next fight. Because fighting at 155, I believe the weight cut, the last three or four pounds is really tough”.

“I have had some pretty tough weight cuts. Every single one to get down to 155 is definitely pretty tough to get there because the last little bit is definitely hard,” Northcutt added. “My body might stop sweating, or maybe it’s hard to lose the last few pounds. But I believe I’m getting older now. A few years in the UFC and my muscles are maturing more, I’m getting a little bit taller, stronger, more muscular. So we’re gonna see exactly what the game plan is, but I believe I am going up to 170.”

Despite the fact that Northcutt is undefeated at Lightweight at 4-0, the only 2 losses he’s had are while competing at Welterweight Division against Bryan ‘Bam Bam’ Barbarena and Mickey Gall.

When asked about his fights at Welterweight Northcutt said,”Well, I had two fights in the UFC at 170. My first fight I went to 170 on like three or four days’ notice, so less than a weeks’ notice because I was scheduled to fight at 155,” Northcutt, who has recently been training with Team Alpha Male, continued. “I was already cutting down to low 160’s to be able to get ready to finish that last part of my weight cut, and then my opponent got injured. Andrew Holbrook broke his foot, so they moved it to 170 last-minute.

“I think it will be different, because my last fight at 170 against Mickey Gall, I didn’t have a training camp. I was in school, studying to be a petroleum engineer.

My focus wasn’t focused full-time on fighting, I didn’t have the ability to have training partners and sparring and people correcting me and the best coaches in the world.

So I think it’s gonna be a different experience now.”

Previous article“UFC: BJ Penn does not have any plans of fighting but says,”The door is always open”
Next articlePhotos- The Veronica Macedo Story