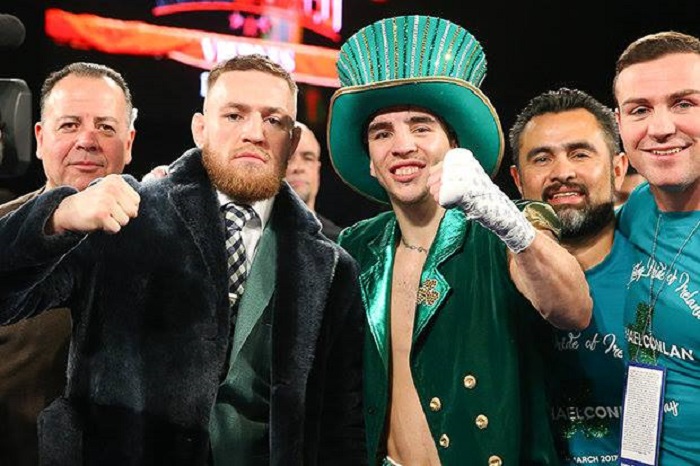 Former Irish Olympian and London 2012 bronze medallist Michael Conlan picked up his sixth victory in as many professional fights as he knocked out David Berna at Madison Square Garden on Saturday night.Conlan, whose fight versus the Hungarian was kept until last despite not officially headlining the show, brought the Irish-heavy crowd to its feet with 15 seconds remaining in the first round: a left hand to the solar plexus creased Berna, who beat the count with less than a second to spare. 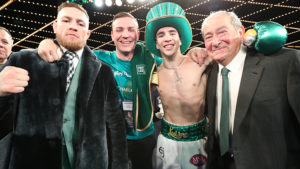 The Belfast featherweight could have won inside the first round after sending his opponent sprawling to the canvas with a beautifully-timed shot to the solar plexus but Berna just managed to beat the count.At the beginning of the second round, the 27-year-old Hungarian went down for a second time and the referee decided to put an end to the fight.

Mind you, he didn’t have to wait long, A Conlan onslaught against the ropes saw the referee intervene, and not four minutes after he emerged to a hair-raising reception at Madison Square Garden’s Theater, the Irishman was celebrating his sixth win as a professional.

In the post-fight interview, Conlan said,”I knew this would happen, He started committing, and I hit him and dropped him with a beautiful body shot in the first round. After that, I knew I was going to stop him.It is something really special to be fighting on St Paddy’s Day. Now I want to do it in Ireland. We will sell out any stadium in Ireland.”

Conlan started his career with four stoppage wins before being taken the distance by Argentina’s Luis Fernando Molina in a six-round contest last December.

A year on from his debut at the same arena, Conlan’s record improves to 6-0 (5KOs). Next up should be a homecoming in Belfast this June.

Previous article
UFC:Bantamweight prospect Tom Duquesnoy talks about his victory against Terrion Ware,legalisation of MMA in France and much more
Next article
UFC: Bruce Buffer soon to release a new song with Steve Aoki