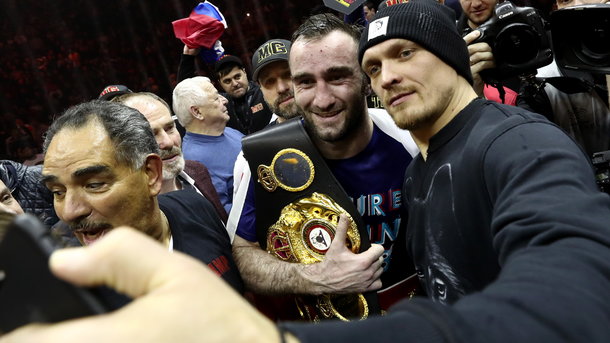 The World Boxing Super Series cruiserweight final between Oleksandr Usyk and Murat Gassiev that had been scheduled for May 11 in Jeddah has been postponed after Usyk suffered a minor elbow injury.
Ukraine’s Usyk, 31, was preparing to defend his WBO and WBC cruiserweight titles against Gassiev, the IBF and WBA champion from Russia, at King Abdullah Sports City in what was expected to be the most significant fight of the year.
In addition to crowning an undisputed cruiserweight champion and the winner receiving $10 million, the two undefeated fighters would have been vying for the first ever Muhammad Ali trophy.

“Team Usyk has informed Comosa AG that Mr. Usyk suffered a minor elbow injury whilst training for his World Boxing Super Series final against Murat Gassiev, for the Muhammad Ali Trophy,” the World Boxing Super Series said in a statement. “It has been confirmed by all parties, including Comosa AG appointed independent medical staff, that Mr. Usyk is unavailable for the scheduled date of the event, May 11th. As such, the May 11th event, due to take place in Jeddah, Saudi Arabia, has been postponed.”

Comosa AG said it is consulting with the Usyk and Gassiev teams, as well as Sela Sport, the local organizer in Jeddah, to come up with a new date for the fight.

“Comosa AG wishes Mr. Usyk a good and speedy recovery. Further information on the rescheduling of the final will be released in due course,” the statement said.

The postponement comes at a time when there has been serious discussion about the final possibly moving from Saudi Arabia to Russia, where an investment group is said to be interested in bringing the fight there for millions of dollars more than was being offered in Jeddah.

Usyk (14-0, 11 KOs), 31, the 2012 Olympic heavyweight gold medalist from Ukraine, unified two belts in the semifinals with a majority decision win over Mairis Briedis on Jan. 27 in Briedis’ hometown of Riga, Latvia.