Two-Time Olympic Gold Medalist and Unified Women’s Super-Middleweight Champion Claressa Shields will attempt to become a two-division world champion when she faces unified women’s 154-pound champion Hanna Gabriels for the vacant IBF and WBA Middleweight World Championships at Masonic Temple in Detroit on Friday, June 22.
Shields (5-0, 2 KOs) grew up in nearby Flint and was the first American boxer in history (male or female) to win consecutive Olympic Gold Medals. The 23-year-old turned professional following the 2016 Olympics and became the Unified Women’s Super-Middleweight World Champion in just her fourth professional fight. Shields now begins her first camp with renowned trainer, John David Jackson, as she attempts to become a two-division champion. 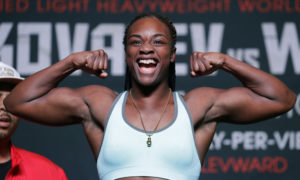 Shields was born and raised in Flint, Michigan, where she was a high school junior in May 2012.She was introduced to boxing by her father, Bo Shields, who had boxed in underground leagues. Bo was in prison from the time Shields was two years old, and released when she was nine. After his release he talked to her about boxer Laila Ali, piquing her interest in the sport, although Bo nevertheless believed that boxing was a men’s sport and refused to allow Shields to pursue it until she was eleven. At that time she began boxing, often to the dismay of the Beary-Hands, at Berston Field House in Flint, where she met her coach and trainer, Jason Crutchfield. Shields credits her grandmother with encouraging her to not accept restrictions based on her gender
CLARESSA SHIELDS PUBLIC/MEDIA WORKOUT:
DATE: Wednesday, May 9, 2018
LOCATION: Downtown Boxing Gym, 6445 E. Vernor Hwy., Detroit, MI 48207
SCHEDULE:
3:30-3:45pm – Media/Public Arrival
4:00-4:30pm – Workout Session
4:30-4:50pm – Media Q&A
4:50-5:30pm – Shields Speaks with Students and Q&A