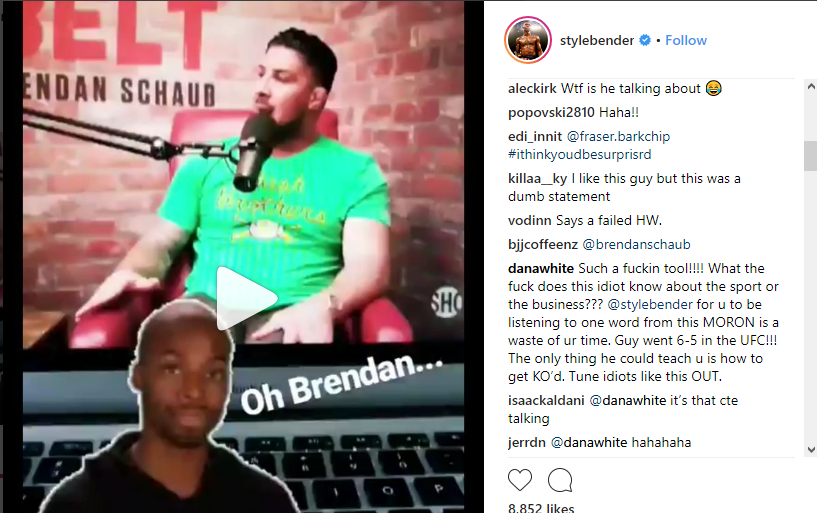 Dana White and Brendan Schaub got into a heated exchange on social media, more specifically, they insulted each other on the comment section of Israel Adesanya’s Instagram post. 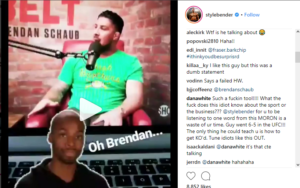 This all started with some comments Schaub made about how fighters with boxing and kickboxing backgrounds don’t always turn out to be great MMA strikers at first, which Adesanya apparently thought were directed at him, and posted on Instagram with some mocking comments:

After seeing this post, Dana White fired back in the comments section.

“Such a f—kin tool!!!!” White commented. “What the f—k does this idiot know about the sport or the business??? @stylebender for u to be listening to one word from this MORON is a waste of ur time. Guy went 6-5 in the UFC!!! The only thing he could teach u is how to get KO’d. Tune idiots like this OUT.”

Schaub then responded to White with a couple of insults of his own, even referencing his ex in Ronda Rousey.

“@danawhite whoooooooa look who got a break from folding Ronda’s laundry to jump on instagram. Bravo sir. He’s right @stylebender what do I know listen to the bald fat guy who has never been in a fight in his life. Do that. ”

Schaub went even further in a later response on Twitter:

We will have to wait and see, how far this Twitter/Instagram feud escalates.

UFC: Dana White feels Paulo Costa is the ‘next big Brazilian star’, says he could headline a card in near future

Previous articleUFC: Dana White feels Paulo Costa is the ‘next big Brazilian star’, says he could headline a card in near future
Next articleUFC: Conor McGregor to get a statue of himself for his 30th birthday