Zabit Magomedsharipov takes on Brandon Davis at UFC 228 via Submission

Zabit Akhmedovich Magomedsharipov  born 1 March 1991 is a Russian mixed martial artist of Avar heritage, currently competing in the Featherweight division of the Ultimate Fighting Championship. He is a former ACB Featherweight champion. As of 26 July 2018, he is the #15 ranked contender in the official UFC featherweight rankings. 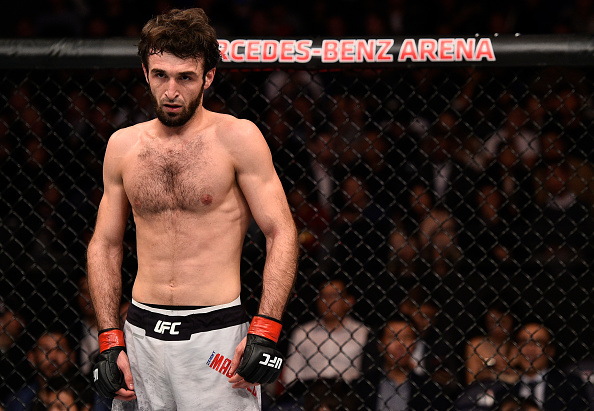 Magomedsharipov has 6–0 in the ACB and was featherweight champion.

Magomedsharipov signed a four-fight deal with the UFC in May 2017.

Magomedsharipov was expected to face Nick Hein on September 2, 2017 at UFC Fight Night: Struve vs. Volkov. However, Hein pulled out of the fight on 21 August and was replaced by Mike Santiago. Magomedsharipov won the fight via submission rear-naked choke in the second round and was awarded a Performance of the Night bonus.

Magomedsharipov faced promotional newcomer Sheymon Moraes on November 25, 2017 at UFC Fight Night: Bisping vs. Gastelum. He won the fight via submission in the third round. The win also earned Magomedsharipov his second Performance of the Night bonus award.

Magomedsharipov faced Kyle Bochniak on April 7, 2018 at UFC 223. He won the fight by unanimous decision. This win earned him a Fight of the Night bonus. Shortly after the bout, Magomedsharipov signed a new multi-fight contract with UFC.

Magomedsharipov was expected to fight Yair Rodriguez on 8 September, 2018 at UFC 228. However, Rodríguez pulled out of the fight on August 23 citing injury. He was replaced by Brandon Davis.Magomedsharipov won the fight via submission in the second round with a modified kneebar.

Previous articleUFC: A day in the life of Paige VanZant
Next articleConor McGregor releases another training video…and this time, he’s showing off