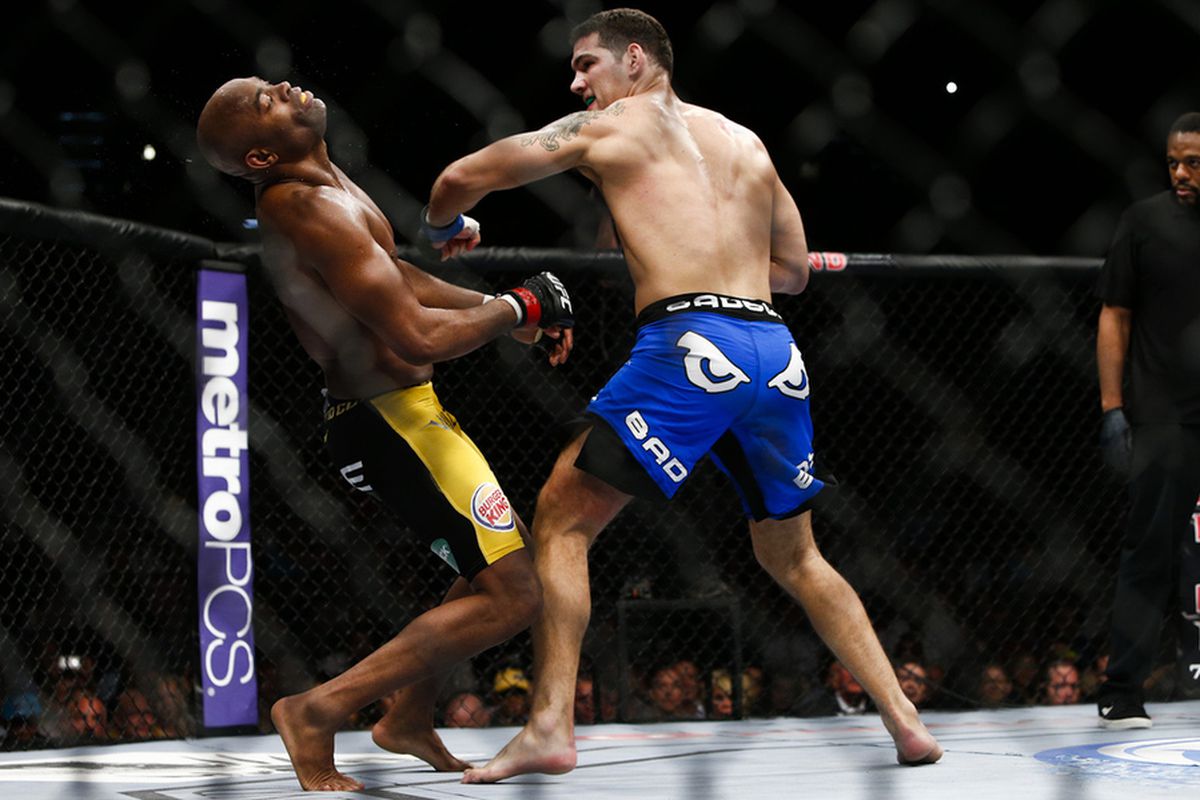 This fight took place on July 6, 2013, in Las Vegas, Nevada at UFC 162. Going into this fight, ‘The Spider’ was of course a huge favourite over Chris Weidman, and he was doing well early on in the fight. Silva was picking Weidman apart and hurting him with leg kicks, and it was only the beginning of round two that he got finished. If Silva hadn’t gotten knocked out, how much longer could Weidman have used that leg? Many believe it was the choice of Anderson’s to clown his opponent, that if he hadn’t, he would’ve won the fight. Who knows if he would’ve won or not, but he wouldn’t have gotten finished when he did, that’s for certain. With the agile ability of Silva, plus his speed and defensive movement, it wouldn’t have even landed. It would’ve most likely been another day at the office for him. Sadly for Silva, this would mark the end of his reign over the UFC middleweight division, and he’d never be the same, going 1-6 with a no contest starting with that fight. Chris Weidman def. Anderson Silva via KO (punches) at 1:18 of round 2 to become the new UFC Middleweight Champion.

This fight took place on May 24, 2014, in Las Vegas, Nevada at UFC 173. TJ Dillashaw was scheduled to face Takeya Mizugaki at UFC 173, as Renan Barao was scheduled to defend his UFC Bantamweight Championship against Raphael Assuncao at the same event. However, Assuncao was forced out of the bout with an injury, and the shot was given to Dillashaw. This is one of the best fights anyone will ever watch, especially if you know the build up to it. Renan Barao was 34-1 (1 NC), had only lost in his first ever professional fight, and was 9-0 thus far inside the WEC/UFC (4-0 in title fights). Barao was widely considered the #1 pound-for-pound fighter in the world, he’d finally passed Jose Aldo. Those who didn’t have Barao at #1 had him at #2. TJ Dillashaw, as Joe Rogan said, really rose to the occasion and had as beautiful of a display of exceeding expectations as you’ll ever see. For someone who was only 9-2 in their entire career to beat someone with the credentials and skill set of Barao, especially the way he did it, this made TJ Dillashaw a star, and rightfully so! Renan Barao has also never been the same since, as he’s gone 2-6 in his last eight, starting with that fight. TJ Dillashaw def. Renan Barao via TKO (head kick and punches) at 2:26 of round 5 to become the new UFC Bantamweight Champion.

TJ continued reign in bantamweight, winning two fights against his biggest rival Cody Garbrandt, until he got caught in a doping scandal. 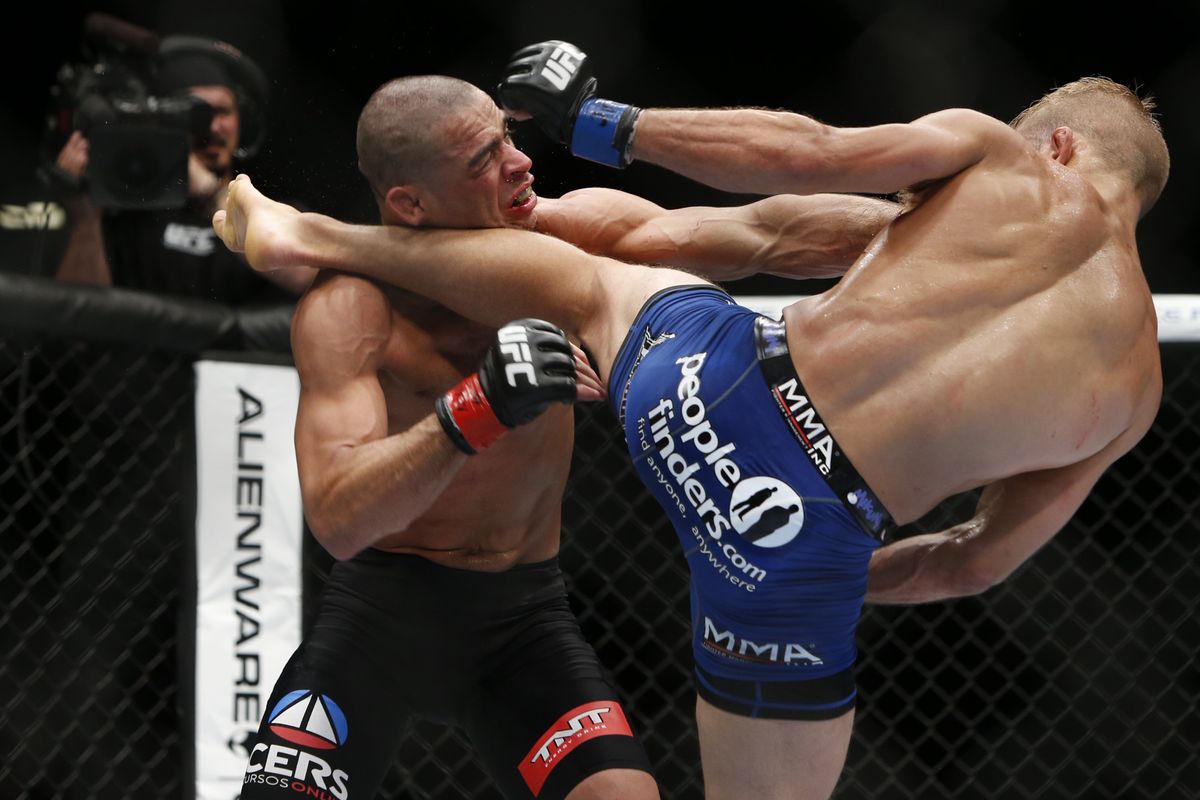 This fight took place on June 26, 2010, in San Jose, California at Strikeforce/M-1 Global. We were finally about to see Fedor fight the very best in the world for the first time in a long time. He started out his Strikeforce career with a win over the formerly undefeated Brett Rogers, a guy that everyone was high on. Rogers was 10-0 with all ten wins coming via knockout in round one, not one of which was more than five seconds past the half-way mark. After flattening him, Fedor would then face BJJ ace Fabricio Werdum, who would lock him up in a triangle and get the finish. This certainly shocked the world because Fedor was seemingly unbeatable. He was perfect on the ground, perfect on the feet, wasn’t a huge heavyweight and carried some extra flab but was incredibly fast and powerful, he was an absolute machine. Fedor made it to 31-1 (1 NC) at his best, with his only loss via TKO (cut), which was avenged. That’s incredibly impressive, especially for someone who ruled the ring everywhere he fought. Fedor wouldn’t be the same afterward either, as he’d also lose his next two, going from 31-1 to 31-4. Starting with his loss to Werdum, he’s gone 7-5 since. Fabricio Werdum def . Fedor Emelianenko via submission (triangle armbar) at 1:09. 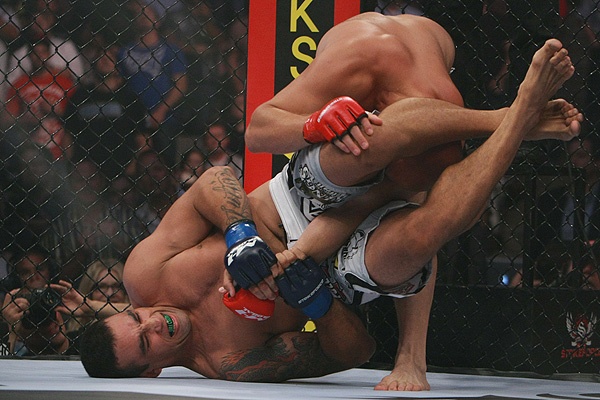 2. Georges St-Pierre vs. Matt Serra I

This fight took place on April 7, 2007, in Houston, Texas at UFC 69. This was hands down the biggest upset in MMA history until late 2015. No one expected Matt Serra to beat Georges St-Pierre, who everyone saw as the future of the welterweight division. GSP won and defended the UCC Welterweight Championship in just his second and third fights, and won two more before joining the UFC. After losing to Matt Hughes in his first UFC title shot, GSP went on a tear, winning his next six fights, one of which was a rematch with Matt Hughes, again for the title. He’d just won the UFC Welterweight Championship, and had a record of 13-1. St-Pierre was defending his newly won title against The Ultimate Fighter 4 winner Matt Serra, who was 9-4 and just barely beat Chris Lytle via split decision to get the title shot. GSP said this was the only time he ever slept well before a fight; he never slept well before, and never did after, this was the only time, and it was because he took the fight and his opponent lightly. Dana White is on record saying, “Matt Serra’s mother didn’t even think he could win that fight.” GSP is the only fighter on this list that was still at the top of his game after the loss, as he won all 13 of his next fights before vacating his belt to take a break, and won his only comeback fight as well. GSP retired with a record of 26-2, with the only two defeats he’d ever suffered being avenged. Matt Serra def. Georges St-Pierre via TKO (punches) at 3:25 of round 1 to become the new UFC Welterweight Champion. This fight took place on November 14, 2015, in Docklands, Australia at UFC 193. This makes it to #1 on the list because, well, Ronda Rousey was a megastar, and she was as dominant as she possibly could’ve been. It was almost like watching Mike Tyson or Wanderlei Silva in their primes, we would all just be thinking, ‘how long is this girl going to last?’ There was only one fight she’d ever had that made it past the first round, and it was a rematch against a woman that she previously beat in the first round. Aside from that, only two wins made it past a minute. That means nine of her twelve wins were under a minute; she was also 3-0 as an amateur with all three wins in under a minute. She had only won by submission (armbar) until her ninth fight, then three of her last four wins were knockouts. She was breaking records, she’s the reason women are in the UFC, she was incredible, then Holly Holm happened. A lot of people wanted to see this fight, but most of those same people thought that Holm needed more experience before she fought Rousey. Holm was only 2-0 inside the UFC with two decision wins, one of which was very close. Holm easily used her footwork and danced around Rousey, picking her apart throughout the fight. Round two is where it really started to get bad for Rousey, she looked like she didn’t even know where she was well before she got knocked out. That head kick Holm hit her with is one of the most vicious we’ll ever see land flush. Rousey came back for one more fight later on and lost via knockout in round one to Amanda Nunes. Once she lost, she wasn’t the same either. Holly Holm def. Ronda Rousey via KO (head kick) at :59 seconds of round 2 to become the new UFC Women’s Bantamweight Champion. 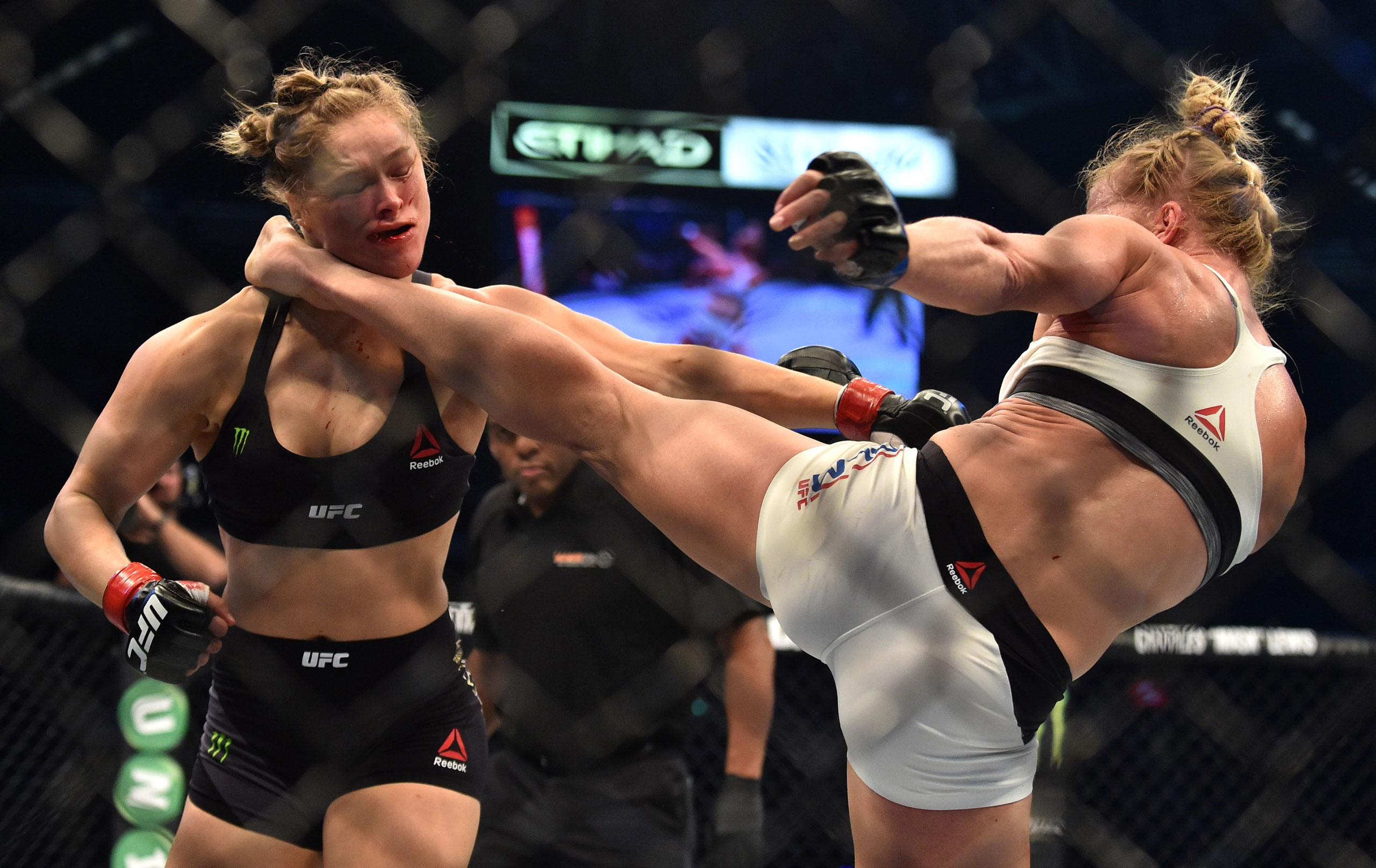 Previous article
Colby Covington: Me and Masvidal are Batman and Robin. I’m Batman!
Next article
Israel Adesanya to Robert Whittaker: ‘Get f***ing ISIS. Bring whoever has to help’