The Eagle after his submission win, jumped through the cage and launching himself into the crowd. His intended target was Dillon Danis. Few of Khabib’s teammates jumped cage and attacked McGregor and UFC is planning to release Zubaira Tukhugov after which Khabib threatened to leave the UFC.

However, If Khabib Nurmagomedov keeps his words, he might fight for a lucrative payday –  for at least one fight, in Bellator, according to 50 Cent.

50 cent, who has been working with Bellator, made Nurmagomedov a $2 million offer to fight with the rival promotion via social media.

I️ think it’s wrong what the UFC is doing to Khabib, they didn’t do the same thing to McGregor. I’ll pay 2 million cash tonight if he will fight for me at Bellator. pic.twitter.com/K7QYxR4IHI

He said, “I think it’s wrong what the UFC is doing to Khabib, they didn’t do the same thing to McGregor. I’ll pay 2 million cash tonight if he will fight for me at Bellator.” 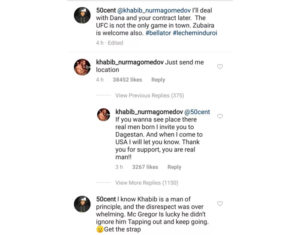 As much as great 50 cents offer is, Khabib Nurmagomedov is under contract with the UFC and the promotion is very unlikely to release the unbeaten champion from his contract.

Previous articleMegan Anderson vs Cat Zingano being discussed for UFC 232 – in case Amanda Nunes pulls out
Next articleSuspended! NSAC gives both Khabib and Conor time on the shelf!