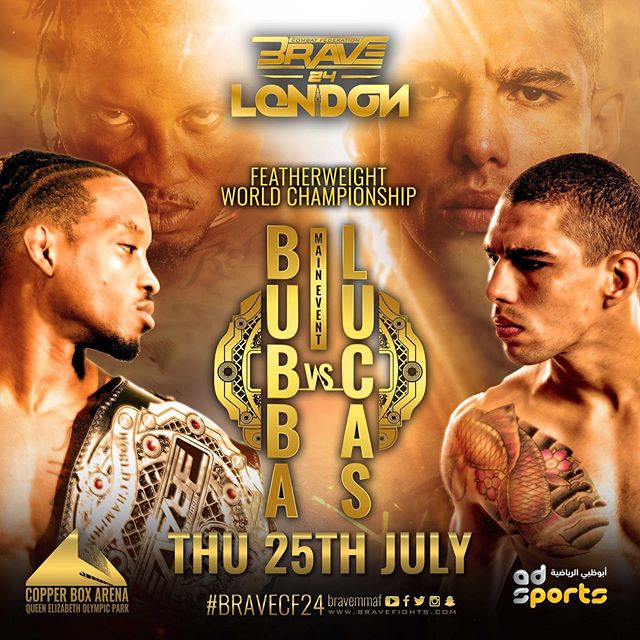 BRAVE Combat Federation’s first-trip to London, in which the promotion will host an exclusive, invite-only event on July 25th, has a few more VIP guests confirmed. The British combat sports community will be gathered at the Copper Box Arena, inside the Queen Elizabeth Olympic Park, as more big names have been confirmed to attend.
After Chris Eubank Sr, Chris Eubank Jr, and Artem Lobov, BRAVE CF announces Aaron Chalmers, Paul Daley, and Brad Pickett will also be witnesses to a turning point in European mixed martial arts, on BRAVE 24: London.

Both Pickett and Daley have been recognized for the role they have played as ambassadors for the sport in the United Kingdom and as true pioneers of MMA in Europe. Both men are big names that have had a huge early impact in the mixed martial arts scene in England and beyond.
Meanwhile, Aaron Chalmers, a reality show star turned MMA fighter has been praised for turning more eyes to the sport, elevating mixed martial arts to a set of new viewers from his previous endeavors
.
They are some of the VIP guests that will be in attendance for BRAVE 24: London, a show that will look to leave a lasting legacy for MMA, as the promotion will connect the highest level of businessmen, politicians, influencers, and celebrities to the sport in order to take MMA to a new level of empowerment and influence.
In the main event of the evening, Featherweight champion Bubba Jenkins will make the first defense of his world title against former Lightweight titleholder Lucas Martins. Also on deck for the exclusive fight night are the returns of Cian Cowley, who takes on Maciej Gierszewski, and rising star Aidan James, from Wales, who meets promotional newcomer Cameron Else.