ADDITIONAL BOUTS ANNOUNCED FOR ONE: ENTER THE DRAGON IN SINGAPORE ON 17 MAY 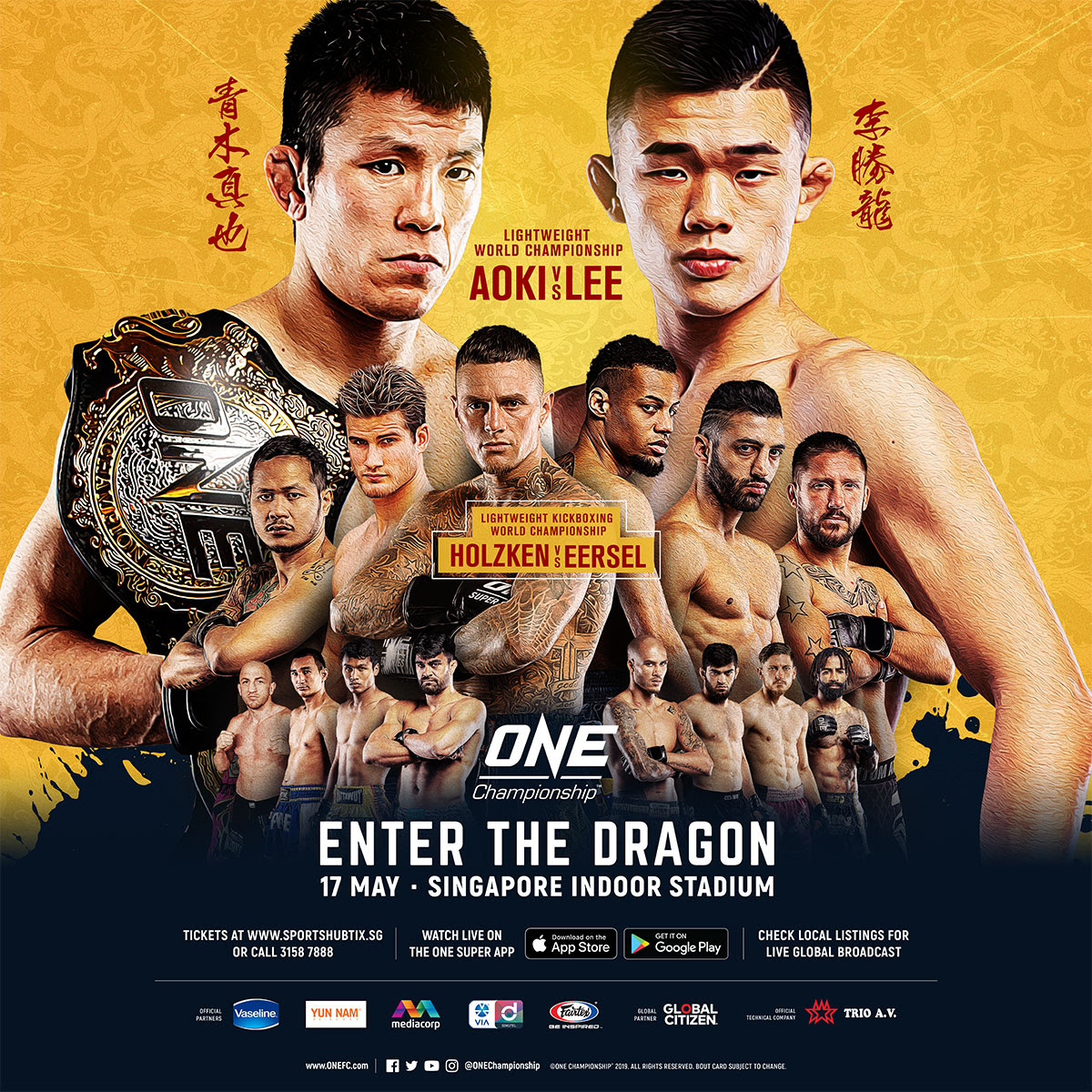 The largest global sports media property in Asian history, ONE Championship™ (ONE), has just announced additional bouts for ONE: ENTER THE DRAGON, set for 17 May at the Singapore Indoor Stadium. Once again, Singapore will play host to world-class martial arts action.

The best and brightest martial arts talent in the world will descend upon the ONE Championship ring to showcase their skills. In the main event, newly-crowned ONE Lightweight World Champion Shinya “Tobikan Judan” Aoki of Japan will defend his title against rising star Christian “The Warrior” Lee of Singapore.

Ticket information for ONE: ENTER THE DRAGON is available at www.onefc.com.

ONE Lightweight World Champion Shinya “Tobikan Judan” Aoki is the most successful submission specialist in Asian martial arts. An iconic figure, he is known for his overpowering ground game, which had already won him titles with WAMMA, DREAM, and Shooto before he began his reign as the king of ONE Championship’s lightweight division.

Aoki is for many the face of Asia in the cage, holding an incredible slew of submission wins and almost 75 percent of his overall victories coming inside the distance. Throughout his fabled career, the Japanese lightweight legend has beaten some of the biggest names in the world, including Tatsuya Kawajiri, Caol Uno, and Eddie Alvarez.

5-time Pankration World Champion Christian “The Warrior” Lee comes from a family of true martial artists. His oldest sister, ONE Women’s Atomweight World Champion Angela Lee, is already an international star with ONE Championship, and his parents are both black belts in various disciplines who began teaching their children techniques from a very early age.

A highly-decorated martial artist, Lee holds black belts in Brazilian Jiu-Jitsu and Total Defense System and is an astonishingly early achiever. In fact, he was voted Most Outstanding Athlete at the 2013 FILA World Championship after winning five World Titles across the disciplines of BJJ, pankration, mixed martial arts, and submission grappling.

In his last bout, Lee defeated Team Lakay veteran Edward “The Ferocious” Kelly of the Philippines via first-round technical knockout. He now moves up to lightweight to challenge Aoki for the ONE Lightweight World Title.

In the co-main event of the evening, Dutch kickboxing superstar Nieky “The Natural” Holzken will take on countryman Regian “The Immortal” Eersel for the inaugural ONE Lightweight Kickboxing World Championship.

Holzken is a multiple-time kickboxing World Champion who began boxing at the age of 10, later expanding on his skills to add kickboxing and Muay Thai to his repertoire.

Holzken competed extensively in all three disciplines, compiling over 100 combined wins on his way to Dutch and European championships, as well as several World Titles. A sensational striker, Holzken’s entertaining style has already seen him secure almost 50 knockouts in kickboxing and an additional 11 in the boxing ring.

Eersel, meanwhile, represents the famed Sityodtong Amsterdam Muay Thai camp and has made a name for himself as a Lion Fight Super Middleweight World Champion and an MFC Kickboxing World Champion.

He first began his martial arts journey by training in taekwondo at the age of eight. After experiencing success in taekwondo competition as well as amateur kickboxing, Eersel decided to turn professional and has since put together an incredible record of success.

The ONE Super Series Featherweight Kickboxing World Grand Prix kicks off at ONE: ENTER THE DRAGON, featuring eight of the world’s best kickboxers.

Multiple-time Karate World Champion Sage Northcutt stands tall among the brightest young mixed martial arts stars of today. A lifelong martial artist, Northcutt has been training under the instruction of his father ever since he was four years old, and he was an incredibly accomplished athlete in the discipline of karate. He won an astounding 77 World Titles as a youth and was even inducted into the Black Belt Magazine Hall of Fame in 2012.

Northcutt rose to prominence quickly in mixed martial arts, beginning his slate with seven straight wins in top North American promotions. In 2018, he joined the world’s best martial artists in ONE Championship on the back of three straight victories. He now makes his promotional debut against Cosmo “Good Boy” Alexandre.

Alexandre is an accomplished kickboxer and is a Lion Fight Super Middleweight World Champion and it’s Showtime 77MAX World Champion.

Like many Brazilians, Alexandre played football in the streets from a very young age. He even had a blossoming career as a professional footballer, but he gave it all up at the age of 19 to pursue Muay Thai instead. It turned out to be one of the best decisions he ever made.

Alexandre has since put together a phenomenal combat sports career, winning numerous World Titles in both Muay Thai and kickboxing. Known as one of the best strikers Brazil has ever produced, Alexandre has faced some of the biggest names in the striking arena, including the likes of John Wayne Parr, Sakmongkol Sithchuchok, Yodsanklai Fairtex, and Giorgio Petrosyan.

On top of his striking career, however, Alexandre is also mixed martial artist riding a seven-bout winning streak. He is now tasked to welcome Northcutt to the world’s largest martial arts organization.

Sexton is a 2-time Costa Rica BJJ National Champion whose passion for martial arts was born after witnessing the art of Muay Thai on a trip to Thailand when he was young. But it wasn’t until he started training in Brazilian Jiu-Jitsu however when he truly shined. Today, Sexton owns a black belt in BJJ under the legendary Renzo Gracie.

Arslanaliev, on the other hand, is a Dagestani BJJ Champion who took up martial arts when he was just five years old. He went on to place on the podium at numerous BJJ tournaments around Europe, even earning the title of Azerbaijan Open BJJ Champion. In wushu, he is a former Russian and Armenian national champion, as well as a three-time champion in both Azerbaijan and Dagestan, showcasing his all-around skill set.

Singaporean Muay Thai champion and former ONE World Title contender Amir Khan makes his return to the ONE Championship stage when he faces promotional newcomer Iurie Lapicus of Italy.

Khan has faced the biggest names in ONE Championship’s lightweight division, including former ONE Lightweight World Champion Eduard Folayang just last November. He is now tasked to welcome Lapicus in his ONE Championship debut.

Dejdamrong is a multiple-time Lumpinee Stadium Muay Thai World Champion across different divisions. As a professional, he would compete multiple times each month and was a veteran of over 300 bouts by the time he retired from the sport. He transitioned to mixed martial arts in 2014 and has since put together an impressive winning record.

Miao began training in wushu when he was young in order to protect himself from bullying. Making martial arts his professional career, Miao later moved to Beijing where he now trains at Fight Brothers camp, where he has picked up Brazilian Jiu-Jitsu and sharpens his growing skills among some of the finest Chinese martial artists today.

Former ONE World Champions Alex “Little Rock” Silva of Brazil and Yoshitaka “Nobita” Naito of Japan will meet head-on inside the ring for the third time in this highly-anticipated trilogy bout.

The two met twice before, the first encounter ending in a dominant victory for Silva which saw the Brazilian capture the ONE Strawweight World Title in a dominant performance. Months later, Naito exacted revenge on his conqueror and took back the World Title via close split decision. Now at one win apiece, Silva and Naito look to settle the score in their epic rivalry.

Submission grappling superstar Garry “The Lion Killer” Tonon of the United States makes a quick turnaround to face Yoshiki Nakahara of Japan in a featherweight contest.

Tonon has impressed so far in his time in the ONE Championship Circle, winning all four of his bouts up to this point by scintillating finish. In his most recent outing, Tonon methodically broke down Dutch-Indonesian featherweight Anthony Engelen at ONE: A NEW ERA in Tokyo. The American now jumps up to face perhaps the toughest test of his career thus far in Nakahara, who is a former Gladiator Featherweight Champion.

Yamaguchi is a veteran of the Asian women’s mixed martial arts scene and has challenged for the ONE Women’s Strawweight World Title twice so far in her career. With a great mix of powerful striking and impeccable grappling, Yamaguchi emerges as one of her division’s top contenders. She now welcomes 2-time Chinese mixed martial arts champion Meng Bo to ONE Championship.