ADDITIONAL BOUTS ANNOUNCED FOR ONE: ROOTS OF HONOR IN MANILA ON 12 APRIL 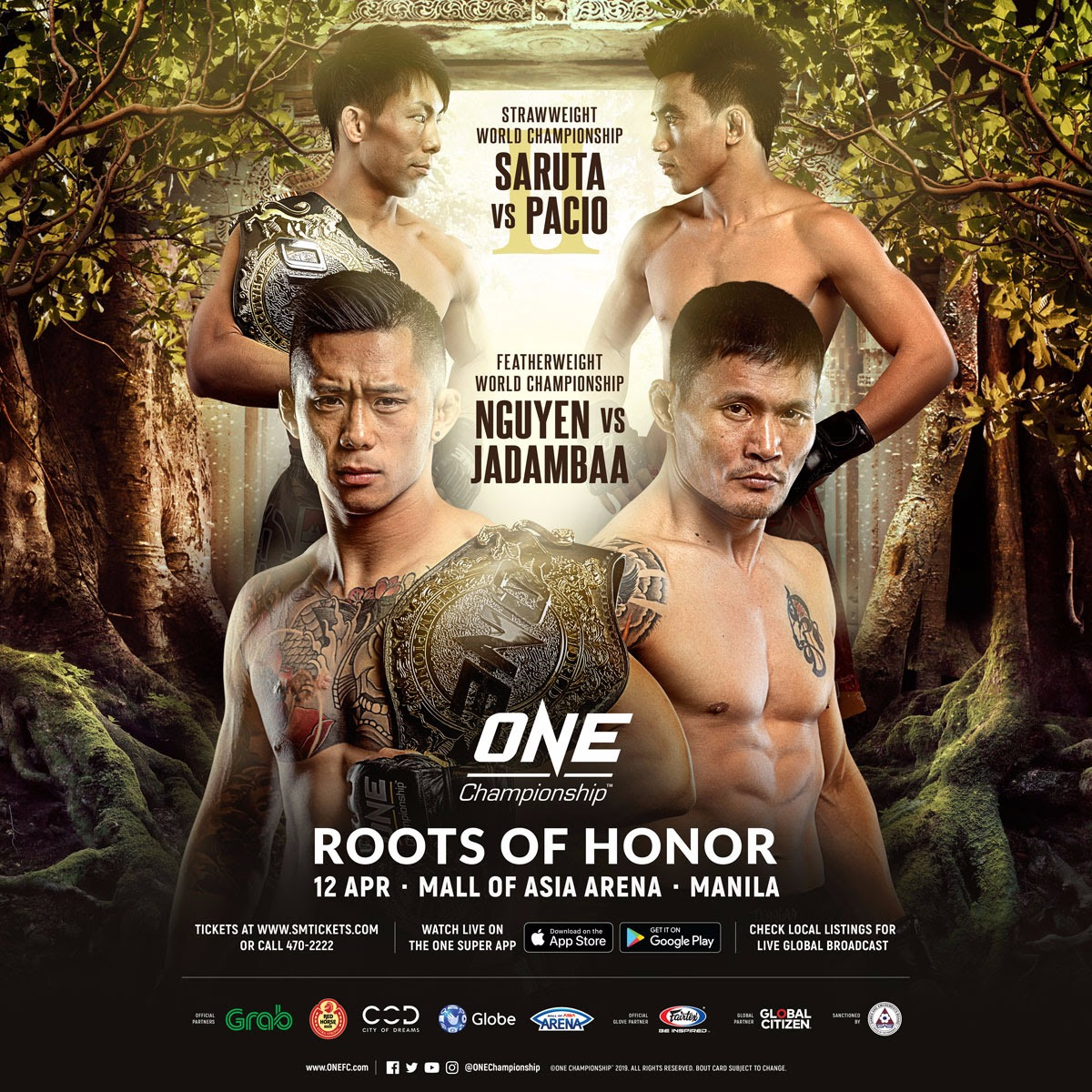 In the main event, reigning ONE Featherweight World Champion Martin “The Situ-Asian” Nguyen of Vietnam and Australia will defend his title against former ONE World Champion Narantungalag Jadambaa of Mongolia.

Also, in the co-main event, a highly-anticipated rematch takes place when former ONE World Champion Joshua “The Passion” Pacio of the Philippines challenges reigning ONE Strawweight World Champion Yosuke “The Ninja” Saruta of Japan.

Ticket information for ONE: ROOTS OF HONOR is available at www.onefc.com.

The 29-year-old Nguyen has become one of the most prolific Asian martial arts talents over the past few years, winning seven of his last nine contests. In 2015, he embarked on an unprecedented six-bout winning streak. Along the way, he captured both the ONE Featherweight and ONE Lightweight World Titles to become a simultaneous two-division ONE World Champion.

After falling to injury, however, Nguyen was prompted to vacate the lightweight belt in September 2018. Now, with Nguyen fully recovered, the Vietnamese-Australian sensation is slated to make his much-awaited return to action against the dangerous veteran Jadambaa.

Jadambaa burst onto the ONE Championship stage in May 2014 by defeating former ONE Featherweight World Champion Honorio “The Rock” Banario of the Philippines. He has since been a winner of six of his last eight contests. In 2014, he captured the ONE Featherweight World Title with a victory over Koji Oishi. Over the years, Jadambaa has defeated some of ONE Championship’s biggest names, with notable victories coming over Kotetsu Boku, Kazuki Tokudome, and Eric and Edward Kelly.

Having been on a collision course, Nguyen and Jadambaa will meet for the first time in the main event of ONE: ROOTS OF HONOR. This five-round World Title tiff promises loads of action and fireworks.

In the co-main event of the evening, the Philippines’ Joshua “The Passion” Pacio looks to exact revenge over former conqueror Yosuke “The Ninja” Saruta of Japan. Saruta scored a monumental upset when he defeated Pacio via razor-thin split decision at ONE: ETERNAL GLORY last January to capture the ONE Strawweight World Title.

After Pacio’s initial opponent, Hayato Suzuki, was forced to withdraw from the bout due to injury, it was Saruta who was tapped to take his place in the main event opposite the Filipino.

Using his world-class striking and grappling skills, Saruta put together a comprehensive performance to capture the belt. However, the extremely close result was enough to warrant an immediate rematch between the two. Now, Pacio and Saruta have the chance to settle the score once and for all to determine who is the true king of the talent-filled strawweight division.

Issa, who represents Evolve in Singapore, is a winner of three of his last four bouts, which includes two exciting finishes. Meanwhile, Fu, who is a boxing, wrestling, and taekwondo specialist, has won his last five bouts, which includes three stoppages. The two streaking martial artists are on a collision course and should provide fans with an intriguing match-up.

Dutch-Moroccan kickboxer Ibrahim “Mr. Cool” El Bouni looks to put himself back on the right track when he takes on Andrei “Mister KO” Stoica of Romania.

El Bouni split his first two appearances for the promotion but has impressed in both outings with his world-class striking skills. The former A1WCC Kickboxing World Champion aims to make 2019 a year to remember, starting off by taking on a dangerous knockout artist.

Stoica recently made his ONE Super Series debut at ONE: REIGN OF VALOR. The former SUPERKOMBAT Cruiserweight World Champion is known for his power and technique, as well as his warrior spirit. Stoica looks to make a statement against “Mr. Cool” in his return.

The 39-year-old Santos recently scored a scintillating first-round knockout victory over Japan’s Daichi Abe, which brought him back into the World Title mix. Santos is known for his brute strength and undeniable power. He will be bringing these qualities into the cage once more when he squares off with his next opponent.

On the opposite side of the spectrum, Nakashima has built a career around his well-calculated and intelligent bout strategies, which has brought him victory every time he has stepped into the cage. It will be no different against Santos, whom Nakashima plans to dominate from the first round to the last.

Kelly, a Philippine Featherweight Champion, is well-versed in both the striking and grappling arts. A senior member of the famed Team Lakay of Baguio City, Kelly is best known for his 21-second knockout victory over Cambodia’s Meas Meul in January 2018. He aims for the same result against Lee.

Lee is a NAGA No-Gi Grappling Champion, and one of the craftiest submission artists in the ONE featherweight division. A representative of 10th Planet Jiu Jitsu in his native Korea, Lee will put his mat skills to the test against a world-class wushu champion in Kelly.

In a ONE Super Series Kickboxing contest, Andre “The Giant” Meunier of Australia takes on Anderson “Braddock” Silva of Brazil. Meunier, a four-time Kickboxing World Champion, will welcome Silva to ONE Championship, as the latter makes his debut for the promotion.

Former ONE World Title contender Eric “The Natural” Kelly of the Philippines is looking to make a lasting impression when he returns to action to face China’s Tang Kai.

Kelly had a blazing start to his mixed martial arts career by winning his first 12 professional bouts. In February 2013, he competed for the inaugural ONE Featherweight World Title, falling short against Filipino compatriot Honorio Banario. A year later, Kelly came back and put together the performance of a lifetime when he submitted tough Australian Rob Lisita. Now after revitalizing his training camp, Kelly looks to reignite his career against Tang.

Tang, a WBK Tournament Champion, is a boxing stylist known for his fast hands and aggressiveness. The Dragon Warrior Shanghai representative is a winner of his last four bouts, all of which have ended in explosive knockouts. Against a veteran like Kelly, Tang’s striking skills will be put to the ultimate test.

Singaporean flyweight prospect Niko Soe is set to take on freestyle wrestler Eko Roni Saputra of Indonesia. Soe is a winner of his last two outings, and he aims for his third straight victory against Saputra, who is making his mixed martial arts debut.

In a ONE Super Series Muay Thai contest, the legendary Lerdsila PhuketTopTeam of Thailand will showcase his fistic talents against Japan’s Kohei “Momotaro” Kodera.

Kodera, a former WBC Muay Thai International Champion, just recently scored a thrilling three-round unanimous decision victory over Kenny Tse at ONE: REIGN OF VALOR. Lerdsila, on the other hand, is an absolute legend in Muay Thai with over 200 professional bouts. Kodera and Lerdsila promise to produce fireworks for fans in attendance at the Mall of Asia Arena.

Nguyen made her foray into mixed martial arts in 2014, winning four of her five matches in the amateur ranks in impressive fashion. She turned professional in 2016, and she immediately racked up three straight victories to kick off her career. Now, “Killer Bee” directs her career path to ONE Championship, where she is set to make her promotional debut.

Finally, National Kyokushin Karate Champion Ramon “The Bicolano” Gonzales of the Philippines and Akihiro “Superjap” Fujisawa of Japan will square off in a three-round strawweight contest.