Israel Adesanya speaks on his possibility of being defeated 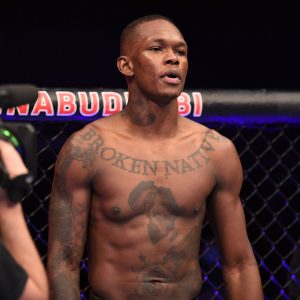 In the last few years, Adesanya has been a force to reckon with in the UFC, and has taken the Middleweight division by storm after Anderson Silva’s dominance over the division for years. With an experience of over 80 fights in Kickboxing and boxing, Israel Adesanya made his MMA debut in 2012 and was signed by the UFC in 2018. Since then. he has fought and defeated Middleweight contenders like Robert Whittaker, Anderson Silva, Paulo Costa and Yoel Romero. He gets better in every fight the more we see his striking, the more we realize that he could be the greatest striker to have ever stepped into the Octagon.

However, speaking to MMA Junkie this week, he admitted that he does face adversity and losses in the gym during his sparring sessions.

“That’s just one of those things that people try and put on you,” Adesanya said. “I’ve had losses in my past that never really changed who I am, never changed the fact that I’m a great fighter. A lot of the greats have had losses. And every time I’ve had a loss, I always come back and knocked someone out. Being undefeated is just a title. It’s one of those titles that people try to hold up like it’s something. But you should see me in the gym. Some days I get my licks, so I know I can be beat. But, when it’s under the lights, and the pressure is on, on the biggest stage, and I’m having fun, I’m a hard man to beat,” Adesanya added. “I’m just gonna ride this out the way I’ve been riding it so far. Stay tuned.”

What’s next for Adesanya?

After cleaning out the Middleweight division, the stylebender has taken up the challenge to move up a weight class to fight Jan Blachowicz for the Light heavyweight title. Jan has tremendous knockout power and has put many Light heavyweights to sleep in his last few fights.

But Jan would not be a new type of opponent for Adesanya stylistically, as he has previously fought fighters like Paulo Costa and Yoel Romero, who have very similar style of fighting and knockout power.

How do you think Izzy will do in the Light heavyweight division?

Scott Coker not keen on signing Anderson Silva to Bellator