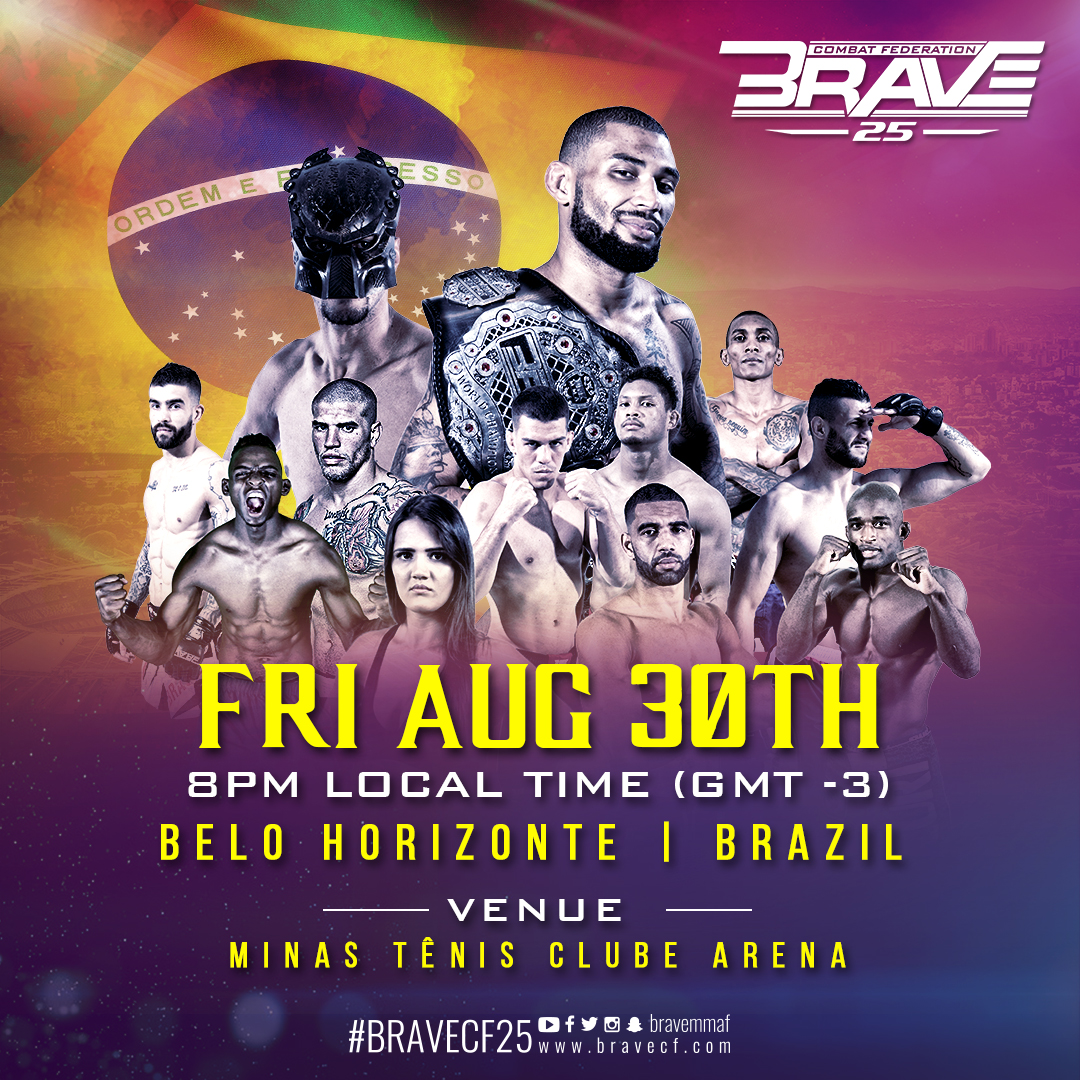 admin
- Advertisement -
Fresh off a legendary night in England, BRAVE Combat Federation continues its world tour with a return to one of its homes: Brazil. BRAVE 25 takes place in Belo Horizonte, on August 30th, and will feature some of the best fighters in the world in one of the richest countries for mixed martial arts talents.
Brazil is the home of current world Lightweight champion Luan “Miau” Santiago, former Lightweight titleholder Lucas “Mineiro”, and other standouts, such as former title challengers Marcel Adur and Felipe Efrain, as well as KO artist Cleiton “Predator” Silva, and submission machine Bruno Assis.
Santiago will headline the card, and defend his Lightweight crown against Cleiton “Predator” in a bout featuring two of Brazil’s most feared strikers.
Luan won the title by defeating former champion Abdul-Kareem Al-Selwady with an incredible spinning-back elbow back at BRAVE 23, in Jordan. Santiago is currently 4-1 under the BRAVE banner.

Meanwhile, Cleiton will have the chance of a lifetime after starting his promotional career with two finishes. “Predator” beat Egypt’s Ahmed Amir by TKO, after a bloody battle, and submitted Marcelo Bustos, in Colombia, a few months later.
Bantamweights collide in co-main event
While a Lightweight title fight will be the main event of BRAVE 25, another Brazilian duel will co-headline the show, as BRAVE CF veteran Felipe Efrain will look to bounce back from losing his title shot against champion Stephen Loman.
The Chute Boxe striker meets Matheus Nicolau in a Bantamweight bout, as the former Flyweight fighter makes his promotional debut in search of a signature win that could eventually propel him towards a title shot of his own.
BRAVE 25 will be the fourth edition to take place in Brazil. BRAVE’s first-ever show outside of Bahrain took place in Curitiba, back in March of 2017, with the company coming back two other times to the country. BRAVE 25 will be the second event taking place in Belo Horizonte, the capital of Minas Gerais.
The rest of the fight card will be announced in the coming days, but BRAVE CF fans can expect another night of exciting MMA action that will position Brazil as the home of mixed martial arts for one more night.