After UFC, Daniel Cormier is likely heading to the WWE

Daniel Cormier who is scheduled to fight Derrick Lewis at the Madison Square Garden in New York on Nov.3 has dropped a major bombshell at the UFC media scrum to promote his heavyweight championship, Cormier revealed how he had a tryout set with WWE for a commentary gig. That was put on hold after being added as a late addition to headline UFC 230. 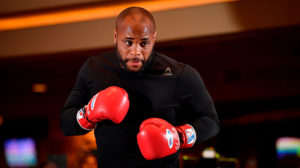 “If I didn’t have this fight, I have been talking to the WWE, because they wanted me to go in and do an audition as a member of the commentary team,” Cormier told reporters during UFC 230’s media day earlier this week (h/t MMA Fighting). “That was my private little thing. But because of the fight, I had to push it back. So there might be some DC in WWE shit coming.”

Daniel Cormier has been a longtime Pro-Wrestling fan himself and wants to learn the trade from the legendary WWE promoter Vince McMohan.

“I like it,” Cormier said of WWE commentary. “I want to freak out. I want to freak out next to the thing with Vince in my ear saying, ‘Say this, you asshole!’ Because I heard Vince tells you what to say. I’m like, ‘OK, Vince.’ Don’t be surprised if I’m on TV and a couple times I go, ‘OK, OK, OK, OK.’ And just say it.”

He said that even though he is going to try out for WWE commentary, he will not leave UFC behind.

“I never want to not be in the UFC,” Cormier explained. “I love calling fights. I just love being part of the UFC, man. It’s everything I’ve ever dreamed of.

“[WWE is] new. It’s something new, right? This is home. Over there is new. And most times, new is fun and exciting. But I love being home. This is my place. I love the UFC.”