Times are tough for former UFC bantamweight champion Cody Garbrandt who is currently riding on a three-fight losing streak, with all of them coming via a way of brutal knockouts.

The UFC wanted to book him for a July event, but his manager Ali Abdelaziz wants him to take some time off and be back better than ever, and that is extremely important considering the way he lost the fights twice to TJ Dillashaw and then to Pedro Munhoz a few months ago. 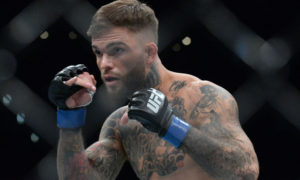 Abdelaziz provided an update on Garbrandt and his fighting future on Monday’s edition of The MMA Hour.

“At the end of the day, when you get knocked out like that, I don’t think you should be fighting [without taking some time off],” Abdelaziz said of Cody Garbrandt (transcript via MMA Fighting). “The UFC is doing their job, they’re going to Sacramento, they offered Cody a main event spot — and this is the right thing to do for the UFC, but it’s our job to be like, ‘You know what, guys? We’re going to go back [and take some time].’ Cody’s been having problems with his hand. Especially getting knocked out like that, I think your brain needs a break.

He also hopes that Garbrandt will change his fighting style. Cody is an explosive fighter who’s entertaining inside the Octagon, but that leaves his extremely vulnerable to his opponent’s counters.

“But in a way, he’s too much of a fighter,” he said. “When you touch this kid, punch him, he wants to come and kill you, right? He’s too much of a fighter and I think he needs to get himself right, physically and mentally. And I think we’re going to see a lot of changes coming up, the way he’s going to fight. He’s got to go back to the Dominick Cruz era when he was having fun, when he was enjoying it, when he was embracing it.

“I think it’s more mental for Cody than anything else, than skill level. Cody has unbelievable jiu-jitsu, he has unbelievable grappling, unbelievable wrestling. But we don’t see it, right? You will see Cody come again, but he’s going to come right.”

Who do you guys want to see Cody fight next?