Alistair Overeem is all set to fight Jairzinho Rozenstruik at UFC on ESPN 7 at the Capital One Arena. He was originally slated to fight Walt Harris, but he had to pull out of the fight and Rozenstruik was a late replacement.

The 31-year old Surinamese born MMA fighter Rozenstruik is in the midst of an absolutely terrific winning streak. He was won all 9 of his fights inside the Octagon with 8 of them ending in stoppage wins. 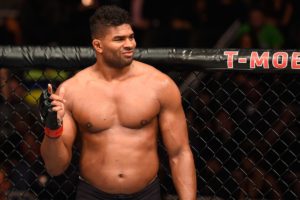 Despite all of this, Overeem isn’t worried about the late replacement and he said that he is prepared well for this fight. He changed gyms and joined Elevation Fight Team in Colorado in March earlier this year and till now it has paid well for him.

“My opponent is a very strong guy, definitely not a walk in the park. My preparation has been excellent. I worked hard for several months. I was planning to fight a little bit sooner, but it became a little bit later. That just gave me extra time to prepare. I usually fare pretty well against this kind of opponent. I have to say, Rozenstruik looked impressive in his last couple of fights, so I’m looking forward to this.”

He changed gyms and joined Elevation Fight Team in Colorado in March earlier this year and till now it has paid well for him.He said that he has worked on the improvement of his overall fighting style.

“I think I’ve made overall improvement. We’ve worked on everything – submission game, wrestling, striking. The team has great energy and chemistry. I’m really at home there with the team and I’m getting better every day.”

This will be Overeem’s 63rd fight inside the Octagon and he has been champion in numerous organisations that he has fought in but despite such a long fighting career, he has never won a UFC title. He is currently riding on a two-fight winning streak and said that he plans on winning his next two-fight and earning a crack at the title once again.

“I don’t know. I’ll have to get through this fight first, but definitely it’s a step towards the title. I think I’ll have to win another one after this before we go for a title shot. Four in a row would be beautiful, right?”

In two-decades that he has spent fighting, he has fought in numerous countries around the world and he was asked during the media day about his future preference if he were to headline a fight card in Asia.

“I’ve never fought in Thailand, so that’s definitely on my list. I enjoyed fighting in China as well. I like new experiences. My career was eleven years in Japan with more than 70 trips there. It would be lovely to be back in Japan as well.”