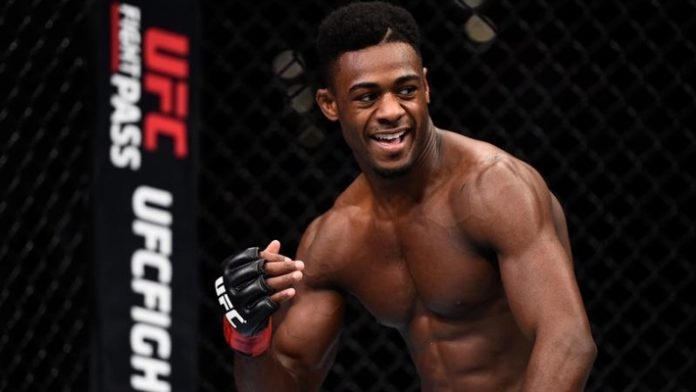 UFC Bantamweight Aljamain Sterling will be facing fellow bantamweight Jimmie Rivera on UFC Fight Night Phoenix on February 17.Sterling the 8th ranked  contender is currently on  a 2 fight winning streak which includes the likes of Brett Johns via decision and Cody Stamann via submission at UFC 228.

The 5th rank contender Rivera won his last fight at the UFC 228 card via an unanimous decision against John Dodson.The common thing however between both the contenders have been their last losses coming at the hands of Marlon Moraes via knockout.

The ‘Funk Master’ as Sterling is popularly called arrived at ‘The MMA Hour’ show this Monday where he spoke about fighting his upcoming opponent Rivera.

Talking to Luke Thomas ,Sterling said that he is indeed very excited to fight someone like Rivera and this isn’t a just another fight for him.Sterling also came up with this analysis that in every single fight Rivera has fought in the UFC ,he has got kicked on the head the highlight being the head kick TKO by Moraes.Sterling gave an example of past Rivera fights which he has won but has got kicked in the head like the ones with Iuri Alcantara,Thomas Almeida and Pedro Munhoz.

What does @FunkMaster_UFC see in Jimmie Rivera's game ahead of #UFCPhoenix? He kept it blunt on #TheMMAHour: "Every single fight Rivera has been in, within the UFC, he's been kicked in the head."