India is now 7-0 against Pakistan in a world cup tournament. Batting first India set a mammoth target of 337 runs. Batting second Pakistan, chasing 337 batted extremely poorly and dropped and lost six wickets with the score of only 166 before a rain delay saw their target revised to another 136 runs required from 30 balls via the Duckworth Lewis method. 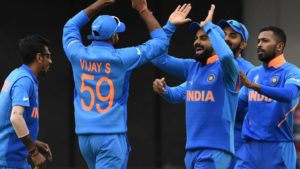 Top scorers for India was Rohit Sharma who scored a staggering 140 runs off 113 deliveries. Virat Kohli also played his part as he scored 77-runs off 65-deliveries. This match was without a doubt the biggest match in cricket world cup history. The match had 1 Billion viewers and nearly 700,000 ticket requests. The match was a complete sell out with ticket prices going as high as ₹60,000 Rupees on the secondary market. Star Sports is expected to generate as much as ₹100 crore.

This mega fight between Amir and Neeraj is endorsed by the Saudi General Sports Authority and will take place during Saudi Seasons that will run from 8 June-19 July that aims to transform the Kingdom into one of the most important tourist destinations in the world.

Previous article
Tyron Woodley to Cringe-Judo: Tone it down by 10!
Next article
Dana White on Tony Ferguson: He’s next for LW title shot!