Amir Khan vs Vijender Singh: Who is the better fighter? 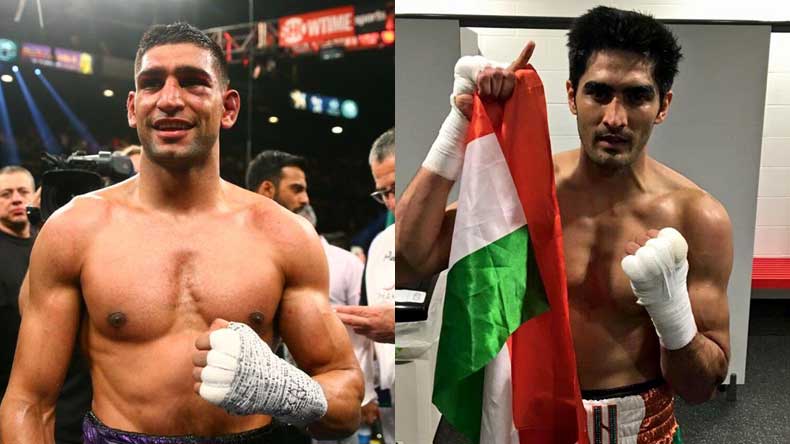 India isn’t a professional boxing crazy nation. Although we do have amateur boxers like Vijender Singh, Mark Kom, Shiva Thapa who have achieved nationwide stardom.

However, the holy grail of boxing is still professional boxing that provides boxers with most of its riches. So far, the only professional boxer from India to make a mark at the international stage is Vijender Singh, who himself turned pro very late in his career. He was 29 years old when he signed his professional contract with the Queensbury promotion of the United Kingdom. 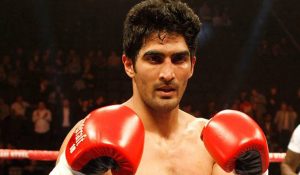 However, despite being a superstar in India, his professional career didn’t take off as one would have hoped. Usually, boxers will an amateur pedigree like Vijender Singh perform well at the professional level. Even though Vijender is undefeated inside the ring with a professional record of 12-0 and has won the WBO Oriental and Asia Pacific title, he is nowhere close to being a contender for a world title in the professional ranks. That isn’t to say that Vijender isn’t a good boxer, because he definitely is, but his promoters haven’t been able to get him the fights needed to reach a stage where he can compete for the world title.

Vijender Singh left Queensbury promotion to sign with Bob Arum’s Top Rank promotion and under them, he was able to fight twice in 2019 after being inactive for the entirety of 2018. He will turn 35 this year and time seems to be running out for him as far as competing for the world title goes.

While Vijender may not be able to fight for the world title, there’s isn’t a non-availability for him to be involved in a big fight. Both fighters have called out each other before.

This is a mega fight in the sense that Amir Khan traces his roots back to Rawalpindi in Pakistan and has said numerous times before that he is a proud Pakistani and a fight with Vijender Singh to some extent could ignite the India-Pakistan rivalry in the field of sports once again.

Although, the problem with this fight could be the weight classes. Singh fights in the super-middleweight division (168-pounds) and Khan is a natural welterweight (147-pounds). However, they both could find a middle ground and fight at Middleweight (160-pounds).

Both Singh and Khan have fought at that weight class as a professional before. Singh made his pro-debut against Sonny Whitting at the 160-pound weight class. Whereas Khan fought WBC middleweight champion, Canelo Alvarez, in 2016.

The fight between Singh and Khan will also be seemingly easy to make, as Vijender is signed with Top Rank Promotions and Khan fought a Top Rank-promoted fighter, Terence Crawford last year and lost via TKO.

Who is the better fighter?

As far as pure stats go, Amir Khan has a significant edge over Vijender Singh. Not only does Khan have a better amateur pedigree that saw him win a silver medal at the 2004 Athens Olympics, but he is also a two-time world champion in professional boxing.

Khan has the experience of over 39 professional fights and has won 34 of them, with 21 of them coming via stoppage. Khan has also bought some of the best fighters in the world and his resume is stacked with top tier opponents.

With that being said, a fight with Vijender wouldn’t be a walk in the park for Khan as over the years, he has taken extensive damage inside the ring. Four out of his five loses have come via knockouts and it’s less than ideal for him to fight a boxer like Vijender who is quite heavy-handed and fights two-weight classes above him. Apart from that, Vijender hasn’t taken any damage in his 12-fight long professional career.

A fight between Vijender Singh and Amir Khan makes so sense from the rankings point of view, but it could generate a significant amount of money from a financial standpoint, thus allowing the boxers to take a risk.

Do you guys want to see Vijender Singh take on Amir Khan?