An Interview with Germaine de Randamie 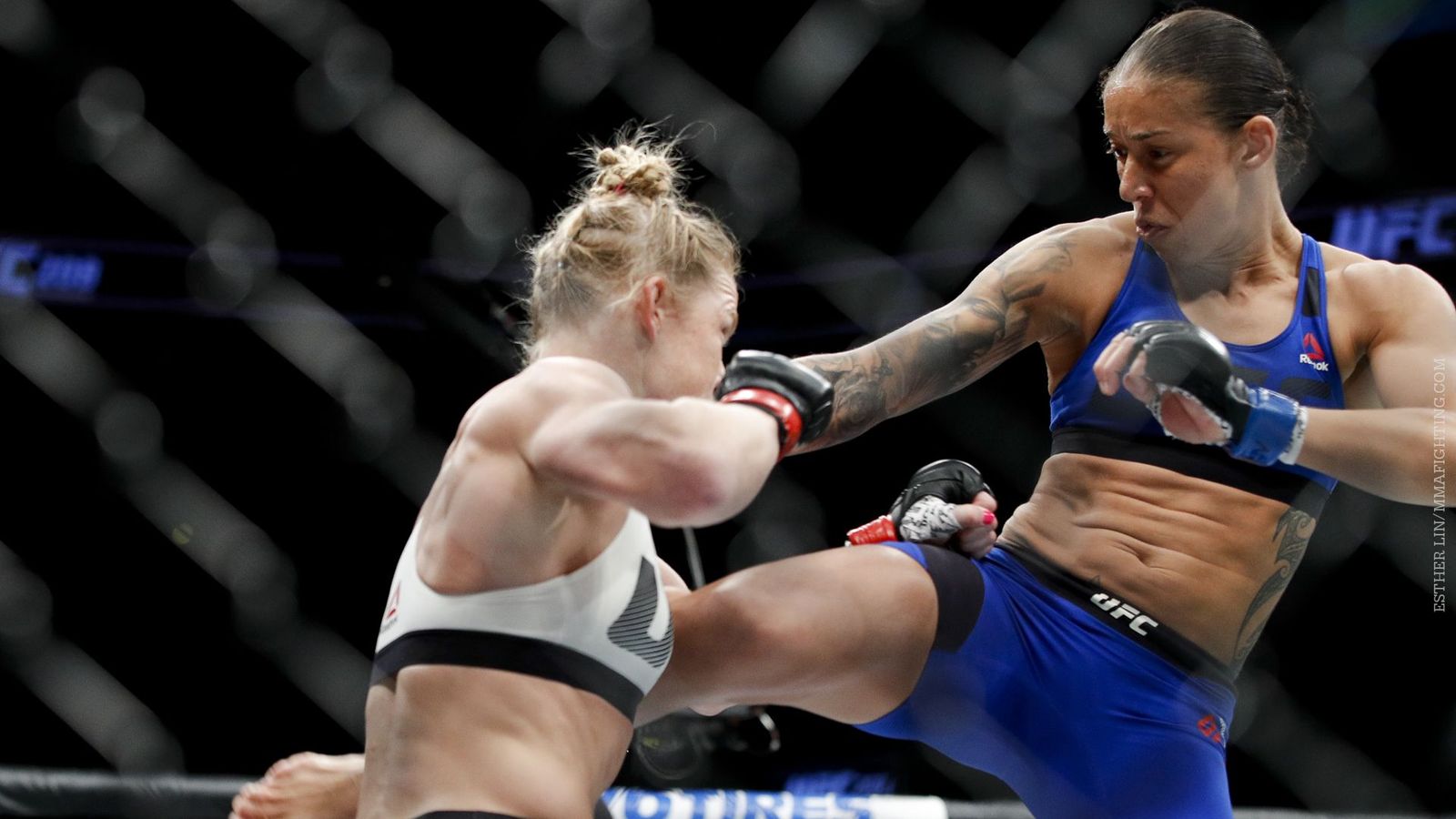 Germaine de Randamie: ‘People said some harsh things, and it hurt me’

UFC 208 weekend was monumental in the world of MMA for a couple of reasons; UFC crowned its inaugural women’s featherweight champion, while it was also announced that GSP was close to returning to the promotion. At UFC 208, Germaine de Randamie faced Holly Holm for the UFC Featherweight title, and in the end, while it should’ve been an ecstatic moment for GDR, she walked out of Brooklyn with a chip on her shoulder.

Germaine was accused of throwing illegal punches – not once but twice – during her fight with Holm, and many believed that the fight should’ve at least ended in a draw. Holly has since filed an appeal of her loss, and while we wait for the verdict, Germaine de Randamie got the opportunity to give her thoughts on the entire situation.

The first ever UFC Champion from Netherlands took part in a media conference call last week, and answered numerous questions ranging from her fight with Holm, to taking on Cris Cyborg next. I also had the opportunity to ask GDR a few questions, as we talked about various topics.

About the fans’ negative reaction after the fight:

What went through my mind? That’s a good question because at that point, it’s a roller coaster of emotions. I was just happy – I think I was just happy. I mean, yeah, okay; I was happy – nobody can take away that shine. Even if the referee would’ve said – “The winner, from the red corner, Holly Holm”, I would’ve still walked out of that cage with a smile. You know why? Because I did it. You know? 18 years in the making, and I wrote history. No matter what; nobody can take that moment away. You know? I respect Holly so much. It’s been a true honour to step in and share the Octagon with such a great champion as Holly. I always say enjoy the moment, because it’s not forever. So I truly enjoyed the moment, and you know, I have a great team of people behind me. We were still very, very happy.

To be honest, when you stand there, it’s probably like tunnel vision, so you hear it, but you don’t hear it at the same time. I got lost in that moment – my moment of victory. They were all so loud – there were a lot of boos, but there were also a lot of people chanting, and were happy. So it’s always a mixture of; and at the thing is, I completely understand why the people were disappointed. I mean, Holly is their champion. Holly is the one that upset the world (when she beat Ronda), so I can’t blame them.

Everybody is entitled to chant for whoever they want to win. I mean, if the roles were reversed and we were in Holland, and if I would’ve lost the fight, maybe my people also would’ve booed. I don’t think so, because they respect everybody, so I believe the Dutch crowd would still be cheering and give warm applause; but anyways, I got a lot of love also from the New York crowd. So I think I’m blessed, still. I still get a lot of love, no matter what.

Her hand injury before the fight and if she thought of not taking the fight:

No, absolutely not. There were days when I was really in a lot of pain during my training camp, and my hand really, really hurt, but there was never a moment in my mind, that I was not going to fight. I said, even if I have to fight with one hand, I will fight with one hand. But nobody was going to take this moment away from me.

Her take down defense, and if that was something she worked on extensively before the fight:

I think a lot of people make a mistake, seeing me as still as a kick boxer. I’m not just a kick boxer anymore; I’ve been in MMA right now for close to 8 years. It will be my bad mistake to think not to train on my take down defense. I train my over all game – absolutely my over all game. If the fight would’ve gone to the ground, you know, I might have surprised a lot of people. At the same time, I have a great team behind me. I truly do; I have some of the most amazing people.

I don’t see them as my coaches; they are truly my blood, my family. Maybe we don’t have the same relatives, but they are. We are prepared for everything; this is MMA. Like I said, I’m an MMA fighter. I’m not just a kick boxer anymore.

If it was her game plan to keep the fight standing:

The game plan is always to finish a fight, you know? Everybody knows me, and it’s not a secret – I always want to finish fights. That was the game plan; I knew I had to be patient with Holly, because I’m normally a very aggressive fighter, everybody knows that too. But I had to be patient; she’s a counter striker. So we had to lure her to come to me, and I was very patient and in first two rounds, I had to run after her a little bit, and it was unnecessary to run after her.

There was a lot of distance between us, but I just had to be patient, and I think I listened very well to my coaches, and I executed everything they asked for me to do.

Her interest in fighting Amanda Nunes and avenging her loss:

I think, at this point right now, the emotions are still very high, and Holly is the one that is being discussed. I offered Holly a rematch; I think Valentina Shevchenko is the rightful contender, and is going to fight Amanda Nunes first, and I think she deserves to fight Amanda Nunes too. I think that’s going to be an amazing fight, and let’s just first check my hand, and see what the UFC wants, and see if they want to put together the rematch, and if Holly accepts the rematch. After that, after the fight, we’re going to see what happens – if it’s going to be Cyborg or anybody else.

How the past two weeks have been since winning the belt:

It’s been amazing; at times, it has been very hard, and also harsh, because people have said some harsh things about me, that really hurt me, because I’m not that person. It sucks to have negative energy, or when there is negative energy around something. I really don’t like that; I’m a positive person and I respect everybody.

So at times, that’s been hard. But I had so much love from the crowd, here in Holland and also in America. I got so much love; I’ve done a ton of interviews, which has been amazing. I’ve been on kids TV show, and last Saturday in my hometown, where I’ve been born and raised, I got the honours of the city. So that’s a dream come true. There was a big party; we celebrated the UFC belt in my hometown.