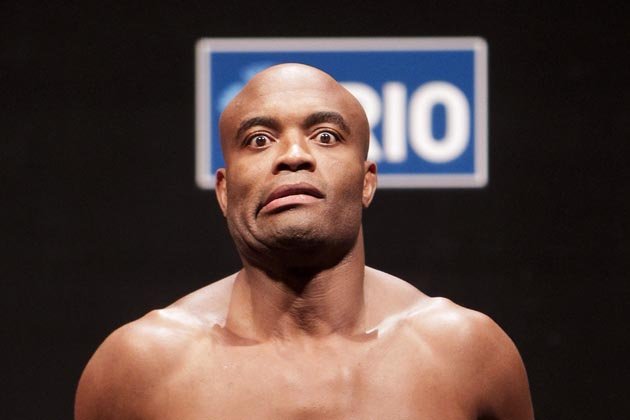 With the recent turn of events and dramatic developments it looks like things are not going well for the Middleweight legend Anderson Silva. His request to compete for the interim title belt against Yoel Romero was shut down by the UFC president Dana White and now he is left without an opponent for the UFC 212 event in Rio de Janerio. The #9 ranked Kelvin Gastelum was set to face off with the Spider in Brazil, but was informed by USADA of a potential anti-doping violation stemming from marijuana usage. UFC offered a replacement in the form of #2 ranked former middleweight champion Luke Rockhold, but Silva was quick to turn it down because Luke was coming off a recent loss. Silva wants the UFC brass to respect his legacy but on the other hand he’s turning down fight after fight – Belfort, Hall and now Yoel Romero raising concerns for his future in the company.

Anderson Silva remains adamant about fighting for the interim title and if that is not happening,he would retire from the sport. His recent rant against the UFC on The MMA Hour didn’t go quite well in the management’s books and Dana White being his usual self was more than happy to see Silva take the retirement route. 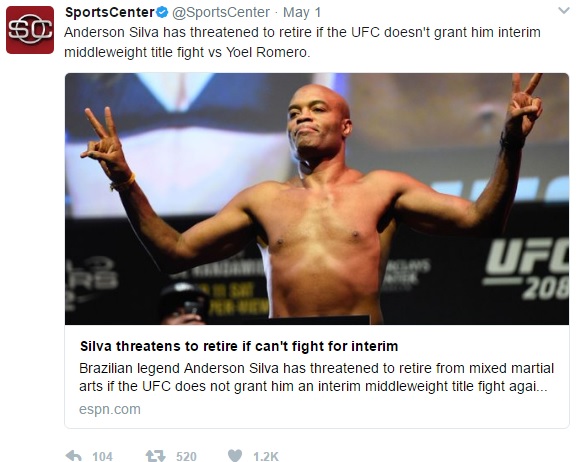 So, what exactly went wrong between the UFC and their legendary middleweight champion. Both had a mutually cordial relationship which showed when Silva quickly stepped in to fight Cormier as a replacement for Jon Jones. Is the new management to be blamed or is it Silva who is tarnishing his legacy? Whatever be the reason it is Silva who would be at the losing end and this is now how he would like his career to end. Many argue that Silva is now a shell of his former self…and with not so impressive wins in recent performances (1-4-1 in his last 6 fights), he is probably looking for a fight where he thinks he can get an easy win. He is open for a rematch with Nick Diaz who is coming off two losses rather than take up a top #5 middleweight.

With the UFC now more interested in making ‘money fights’ in the middle weight division, there seems to be far less options for the Spider to pick from. In his recent Instagram live video, Silva said he is dismantling his camp which makes it clear that he won’t be part of the event. Will Anderson Silva wait for the right opponent and fight in the next UFC event or does he take the high road. We’ll just have to wait and watch how these events turn out to be. As they say – anything can happen in MMA and who knows things might just start going in favour of the Spider.