Aniah Blanchard’s manner of death was by shooting; shooter to receive death penalty

Tragic news has gripped the MMA world after the law enforcement agencies confirmed last week that the body of Aniah Blanchard, step-daughter of UFC heavyweight Walt Harris was found in the woods. Now a suspect is now facing a capital murder charge according to Lee County District Attorney Brandon Hughes after it was determined that she was allegedly shot dead.

The police had earlier taken Antwain Fisher, Ibraheem Yazeed and David Johnson Jr under custody, but only Ibraheem Yazeed will be facing a death penalty, as he was the sole person responsible for the kidnapping and murder of Aniah Blanchard. 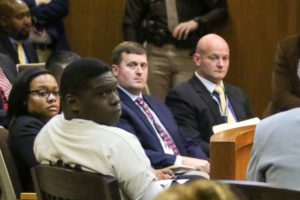 “In the interests of public safety, I can say that the investigation has determined Ibraheem Yazeed to be the lone person responsible for Aniah’s abduction and her murder and he remains in the Lee County jail without bond,’’ Hughes said on Monday. “Mr Yazeed remains innocent of any charges against him until his guilt is proven beyond a reasonable doubt.

“From its first moments, law enforcement moved swiftly and methodically to find Aniah’s abductor, her murderer, and her. The process of seeing justice done on behalf of Aniah and her family will not be swift, but it will be thorough. It is my intention that the response to this horrific crime serve as a warning to anyone who believes they want to come to Lee County and engage in violent criminal behavior. You will be dealt with and the consequences will be severe.”

Ibraheem Yazeed was arrested November 7 in Florida by members of the US Marshals Fugitive Task Force and Escambia County, Florida, Sheriff’s Office on a warrant from police in Auburn.

Last week Walt Harris took to Social Media to pen down an emotional tribute in memory of Aniah and also expressed his grief in the post, calling her his biggest fan.