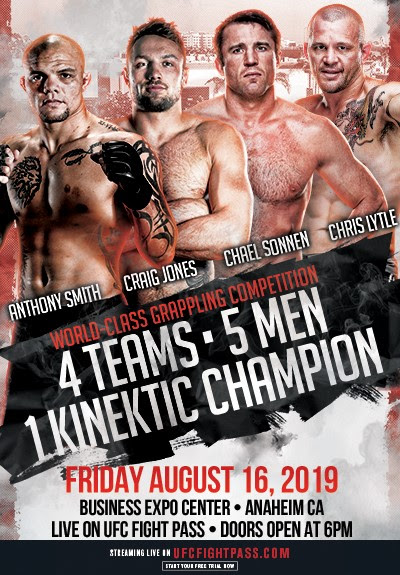 LAS VEGAS (August 7, 2019) – Kinektic has announced a world-class SuperFight between Raufeon “Supa” Stots and Anthony “El Toro” Birchak will provide chief support for the inaugural Kinektic submission grappling tournament on Friday, August 16, in Anaheim, California.
All the action will be streamed exclusively on UFC FIGHT PASS®, the world’s leading digital subscription service for combat sports, live from Anaheim Business Expo Center.
All Kinektic team formatted events will feature four competing squads, each comprised of five world-class grapplers, in a tournament consisting of semifinals and a championship final. A grappling Super Fight, featuring additional participants not already competing in the tournament, will be held between the final semifinals match and championship final
On Aug. 16th in Anaheim, the Stots vs. Birchak SuperFight will be contested at 155-pounds, showcasing a pair of grapplers currently competing in Legacy Fighting Alliance.