Anthony Joshua: The Road To Klitschko documentary shows the amazing rise of a troubled youth to boxing’s riches 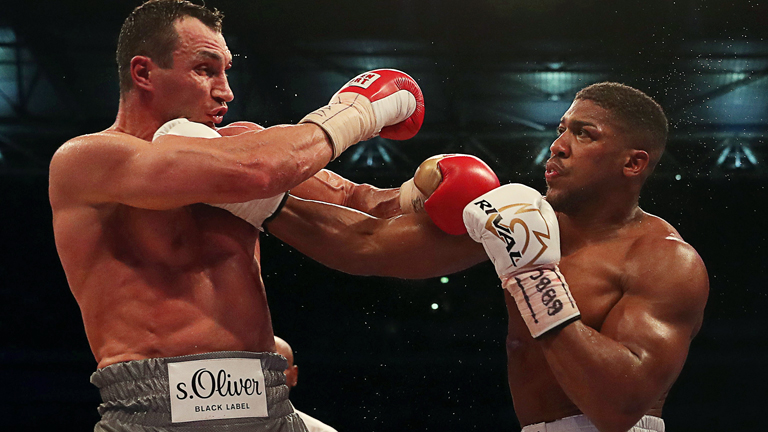 The decline of the heavyweight division saw the rise of the ‘little guys’. Boxing was now no longer ruled by 6’5, 245 lbs behemoths. It had been taken over by the likes of Floyd Mayweather, Manny Pacquiao, Canelo Alvarez, Miguel Cotto etc.

By the turn of the century, Wladimir Klitschko had amassed a professional record of 35-1 and on 14th October 2000, he became the WBO heavyweight champion of the world by defeating American star Chris Bryd in Germany. Following his win over Bryd, he had few title defenses and two losses against Corey Sanders in 2003 and to Lamont Brewster in 2004.

However, what followed next was one of the most successful runs in the boxing’s heavyweight division. Through October of 2004 till November of 2015, Wladimir Klitschko had the longest winning streak in the heavyweight division. He reigned supreme for 4,382 days as world heavyweight champion and in the process defeated 23 world champions.

While all of this was happening in Europe, boxing’s heavyweight division was nowhere to be seen in North America. Even Tyson Fury eventually defeating Klitschko didn’t make much news in the world boxing as few people were paying attention to the boxing’s biggest division. In any other time in history, Wladimir Klitschko would have been celebrated globally by even the most casual of boxing fans.

To add salt to the wound, it didn’t help that Wladimir’s style wasn’t appealing enough for the masses. His defensive postures and ability to control the fight with jabs from a distance might have been an effective strategy, it didn’t translate into a fan following or attracting the attention of the casual fanbase.

On top of that, Wladimir was never the one to run his mouth for self-promotion. He is one of the most gracious and well-spoken heavyweights of this era.

The rise of Anthony Joshua

While boxing’s heavyweight division was on a decline, there still was a lot of interest in the lower weight class across the pond in the UK and the US. The biggest stars in the world were competing in welterweights. While all of this was happening, in 2007 a young 18-year Anthony Joshua from Watford had just taken up boxing and Wladimir was already on his way to creating a legendary legacy for himself.

Joshua won the 2009 and 2010 Haringey Box Cup and the senior ABA Championships in 2010, in only his 18th bout. His terrific record earned him a spot at the British boxing squad and in 2012, he won the Gold medal for the United Kingdom at the Olympics in the boxing’s super heavyweight division.

Within a span of five-years, Anthony Joshua went from lacing his first boxing gloves to becoming the Olympic champion. It was very clear that Joshua was special and the British public adored him. He was handsome, well-spoken and humble, all of this boded well for the 22-year old, who was well on his way to becoming a superstar.

He turned professional in 2013 and signed a promotional contract with Matchroom boxing run by Eddie Hearn. He won his first fight via TKO and he kept knocking out every opponent he faced. By September 2015, Joshua had amassed a professional record of 14-0.

Joshua’s rise to stardom was captured by the BBC crew over two-years. The whole journey is displayed in the documentary called Anthony Joshua: The Road to Klitschko.

On December 12, 2015, Anthony Joshua faced the biggest challenge of his professional career in fellow rising undefeated heavyweight Dillian Whyte. The fight was for the British heavyweight title. It was the first true test of Joshua and he came out with flying colours as he knocked out Whyte in the seventh round with a vicious uppercut.

Joshua had secured a highlight-reel knockout win and his stock rose throughout not only in the UK, but also the US, which is primarily the biggest boxing market in the world. The writing was on the wall, Anthony Joshua was emerging as a star in the heavyweight division capable of gaining the attention of the casual fans.

The documentary features his close friends Freddie, Skins, Benny, and KD. Throughout the documentary, they’re shown to be sticking besides their friend Joshua and keeping him humbled. During the fight, when Whyte was trying to hit Joshua after the bell, it was his friends who stepped up in the ring to rescue their friend. 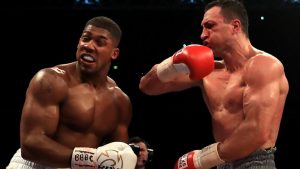 As Joshua became the heavyweight champion, his stock has risen. He is more in demand from the media and advertisers are lining up with their cash. With title defenses over Dominick Breazeale and Eric Molina, it’s clear that Joshua is one of the most popular heavyweights in the world.

However, as his popularity has risen, the documentary shows how his friends and family continue to keep him humble. Even though he is hanging out with movie stars like Dwayne ‘The Rock’ Johnson and Kevin Hart and casually chatting with the likes of Dr Dre, he still hasn’t forgotten his roots.

In a sweet gesture, Joshua even gifted his old trainer Sean Murphy a brand new expensive car. Murphy is the guy credited with keeping Joshua on the right path and away from smoking, drinking etc.

While Joshua is enjoying his life as the heavyweight champion, he still has to unify the division. Following his win over Molina, promoter Eddie Hearn announced from the ring that he will be taking on Wladimir Klitschko for the vacant WBA and WBO heavyweight titles.

Anthony Joshua was going to fight his idol. The pair had previously sparred when Joshua was just a teenager. The documentary digs deep into the mutual respect that both pairs have for each other and it also shows the lead up to what is considered as one of the greatest heavyweight fights of all time.

On April 29, 2017, Joshua and Klitschko faced off at the Wembley stadium in from of 90,000 spectators. The fight was going to be broadcasted in the US by HBO and Showtime and was available to fans in over 150 countries worldwide.

This fight in true sense bought back the attention to the heavyweight division. It was the biggest heavyweight fight in over a decade. In the documentary, Joshua gave a full breakdown of the fight.

In the opening rounds, Klitschko was able to connect with some good punches and jab his way through the first few rounds. Joshua explained that initially he had too much respect for Klitschko and his respect for the Ukrainian outside the ring was hampering his performance inside.

As he let go off that thought, he started finding success and eventually knocked Klitschko down in the fifth round. Following the knockdown, Joshua started celebrating like he had won the fight, but it wasn’t the end and Klitschko fought back valiantly in that round and in the following round, he knocked down Joshua with a hard right hand.

It was here, where Anthony Joshua showed his true character. As he explained it in the documentary that a boxing coach teaches you a lot of things, but he doesn’t teach you what to do after you have been knocked down and laying on the canvas.

Joshua showed heart and hanged in there for the complete round and eventually turned things around and later won the fight via TKO in the eleventh round. He also delved in on how tough the 41-year old Wladimir Klitschko was that despite getting knocked down multiple times, he stood back up and went toe to toe with a young Anthony Joshua.

The documentary Anthony Joshua: The Road to Klitschko is a must-watch for every boxing fan as it shows the pure and genuine side of the Briton and that he is born to achieve that level of status only because he shows that he deserves it.

Boxing fans in India can stream the documentary Anthony Joshua: The Road to Klitschko exclusively on Discovery Plus.