WBO, IBF and WBF heavyweight champion of the world Anthony Joshua is set to defend his title against Kubrat Pulev at the newly constructed Tottenham Hotspur Stadium in London on June 20.

This will be Joshua’s first fight at home following since September of 2018. Joshua’s last two fights took place in New York and Riyadh respectively. Last year he lost in a massive upset to Andy Ruiz in June at the Madison Square Garden. There he was knocked out in the seventh round. 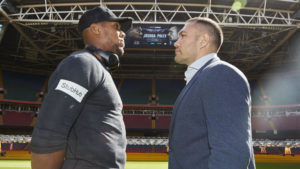 Joshua eventually avenged his loss by dominating Andy Ruiz Jr in a rematch which took place in December of 2018. Pulev and Joshua were previously scheduled to fight in 2017 but the Bulgarian had to pull out of the fight. Following the pull-out, Joshua fought Carlos Takam on short notice and knocked him out on the 11th round.

“I am happy to have the opportunity to show the world how strong I really am,” said Pulev about his upcoming fight with Anthony Joshua.

With that being said, there’s a higher interest in Joshua fighting Fury. However, with Wilder exercising his rematch clause, the all British clash has to wait.

Anthony Joshua vs Tyson Fury has to happen

Matchroom boxing head Eddie Hearn revealed that there’s a lot of interest in the super fight between Fury and Joshua and both fighters want to fight each other.

“You will get this fight. We will do everything that it takes to make this fight.

“Last time, you had us and Team Wilder and we were locking heads. Right now, you have two guys and two camps that genuinely want this fight, that genuinely will do everything that they can to make this fight. It is the only fight.

“When are we ever going to get the chance of two British world heavyweight champions fighting for the undisputed title against each other? It’s never happened before it will never happen again. We’d be clowns, we’d be idiots if we didn’t make this fight. We believe we win the fight, they believe they win the fight, so let’s see it.” (H/T – Sky Sports)

Who do you guys think wins between Anthony Joshua vs Kubrat Pulev?