The highly anticipated rematch between former WBO, IBF and WBA heavyweight champion of the world Anthony Joshua and current champ Andy Ruiz Jr is all set to take place this weekend in Diriyah, Saudi Arabia.

Ruiz created history back in June when he became the first Mexican to win the title. He shocked the world that night as he was a massive 40-1 underdog. Anthony Joshua was heavily criticised the first time when his promoter Eddie Hearn picked him on short notice as a replacement to Jarrell Miller, the original opponent scheduled to fight Joshua, but the fight was cancelled as he failed three different drug tests. 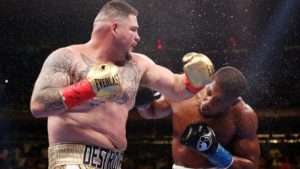 However, that shocking knockout victory of Ruiz Jr in the first fight has now set-up a heavily lucrative rematch. The purse for both the fighters have skyrocketed from their previous meetings. According to The Forbes, The British-star is making a staggering ₹430 Crore ($ 60 million), whereas Ruiz Jr is making ₹64 Crore ($9 Million).

For the rematch, Saudi Arabia has paid a staggering $40 Million (₹285 Crore) in site fees alone.

Sources tell @TheAthleticBOX that Eddie Hearn secured a site fee in excess of $40 million to bring Andy Ruiz-Anthony Joshua 2 to Saudi Arabia. Ruiz’s purse was set in the rematch clause, — a fixed guarantee — so he won’t see any of that money, but he does get his neutral site

The promoter of the event Eddie Hearn even insists that the event will break the PPV record in the UK.

“It will break the record.

“This is such a great time. Ninety per cent don’t want to watch the card.

The 2017 heavyweight showdown between Anthony Joshua and Wladimir Klitschko set the record for the highest-selling PPV in the UK. It sold around 1.5 million PPV buys.

The fight will air on Sky Sports Box office in the UK and on DAZN in the US. The British fans have to spend ₹2345 to purchase the PPV and on the other hand, the American fight fans can subscribe to DAZN for a monthly fee of ₹1500.

The fight will live around 2:15 am India time.