Anthony Pettis fought his last fight in his UFC contract at UFC Fight Night 183 against Alex Morono and defeated him via unanimous decision over three rounds. It was an impressive performance by Pettis and prior to that, he had defeated Donald Cerrone via decision.

Anthony Pettis rather ended his UFC career pretty strong and unlike other veteran fighters who were released by the promotion, the UFC had no plans of cutting him. 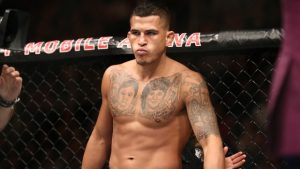 In an interview with Mike Heck of MMAfighting, he revealed that UFC’s rat race forced him to sign with PFL.

“I wasn’t getting cut. I wasn’t on the chopping block, I had an offer from the UFC. But that offer was like putting me back in the same rat race I’ve been in, if you will. I’ve been in that rat race. I know I was going down to 155, everybody’s trying to get that belt again. There’s some names in front of me. It would have been fun to go back and take care of some guys that I know I could have beaten and that I lost to, but when I made this decision I took all that emotion away from it,” Anthony Pettis said.

PFL is the perfect suitor for Anthony Pettis

Anthony Pettis would have the opportunity to fight for the million-dollar prize money in the promotion. PFL CEO Peter Murray was also excited to have him on board.

“From winning world titles to electrifying fans in viral moments, Anthony is a tremendous athlete who fights with flair and tenacity that will fit perfectly with the brand,” PFL CEO Peter Murray told ESPN.

“Not only is Anthony a transcendent athlete within the sport of MMA, but he is also an innovator in the cage who is known for his charismatic fighting style and determination to win. He is very excited to compete on a global stage in our one-of-a-kind season format on ESPN and we look forward to seeing him in action come 2021.”

How do you guys think Pettis would do in the PFL? Let us know in the comments section below.