Former lightweight champion Anthony Pettis is all set to fight two-time title challenger Stephen Thompson at the  Bridgestone Arena in Nashville Tennessee on 23rd March. The fight will be the inaugural debut of UFC on ESPN terrestrial network.

For this fight, Pettis has moved up to welterweight and according to him, the fight was on the bucket list for his UFC career. Pettis has previously campaigned at bantamweight and lightweight. 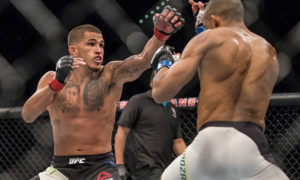 “Honestly, at 155 I practically fought the entire division. There are a couple guys who I have fought that I want some rematches,” Pettis said to BJPENN.com. “The division is in a pause right now. Of course, some things need to be figured out, but I also thought of going to welterweight. I actually fought at welterweight early in my career in Wisconsin.

According to Pettis, it was getting difficult to fight at 155 as the weight cut was affecting his performance.

“I think if I go in there and I feel the way I feel like the ’55 cut is getting harder, it takes away my energy and I think my performances have been hindered because my weight cuts are hard,” Pettis said of potentially staying at 170. “I talked to my team about it a long time ago and we knew ‘Wonderboy’ was available. There are a lot of wrestlers in 170. Like if it came down to a title fight it would make sense, but Thompson for me is a striking match. Traditional martial artist vs traditional martial artist, so it is a good matchup for me.”

Pettis has already started training camp and although many are considering him a big underdog, but he isn’t worried as he considers himself a much better fighter than Thompson.

“I don’t even know and that is the exciting part about it,” he said. “I don’t even know if he is going to try and wrestle me and use his size advantage and hold me up against the cage and score points that way. Or, if he will try and stay long and have a standup fight. It depends what he wants to do. I know I’m moving forward. I have nothing to lose so I’m biting down on my mouthpiece and moving forward.”

Anthony Pettis last fought against Tony Ferguson at UFC 229 in Las Vegas where he lost via corner stoppage as he had suffered a broken hand.

Anthony Pettis vs Stephen Thompson in works for UFC Nashville