The former UFC light heavyweight title challenger Anthony Rumble is coming out of retirement and plotting to return to the Octagon in the heavyweight division as per his manager Ali Abdelaziz.

The news comes after he struck a deal with the prosecutors in Palm Beach, Fla., on Aug. 23 that will keep him out of jail under the condition that he would have to complete an anger management course. He was arrested in May when his ex-girlfriend said that Johnson had her in a ‘football hold’ during an argument to the Police. According to his manager, Rumble will also re-enter the U.S. Anti-Doping Agency testing pool. He plans to fight in March 2020. 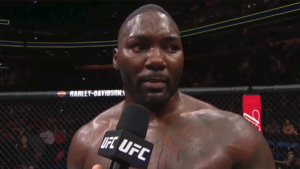 Anthony Johnson’s attorney Michael Walsh said that Johnson was released from after the judge issued him a no-contact order is a proof that no crime was committed by the Rumble.

“Anthony Johnson, if he hits you, your grandkids are going to feel it,” Walsh said. “He’s trying to deescalate her verbal argument. So he simply picks her up gently and puts her down. He simply did not want to argue anymore and put her in another room. That happens every day in America in domestic relationships. … It might be a domestic dispute, but it’s not domestic violence.”

According to Johnson’s manager, his potential opponents include Alistair Overeem and Junior dos Santos.

Demetrious Johnson happy for Triple C, not worried about getting the loss back

Previous articleDemetrious Johnson happy for Triple C, not worried about getting the loss back
Next articleM-1 Challenge featherweight champion Nate “The Train” Landwehr Moves on to UFC