Anthony Smith has been on a roll lately, as he continued his winning streak by submitting Volkan Oezdemir in the third round. Coming into the UFC Moncton fight, the 30-year-old Texan, who fights out of Omaha was coming off with back-to-back stoppages against former champions Rashad Evans and Shogun Rua.

Now that he has beaten Oezdemir, he can his eyes set at the UFC light heavyweight title. He says that he wishes to fight Jon Jones in 2019 and has said that Jon Jones is hittable and doesn’t have the same knockout power as the Oezdemir. 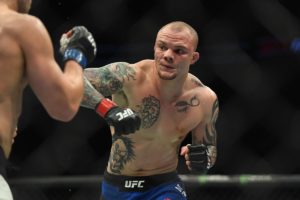 However, Daniel Cormier earlier said that he is not interested in fighting Smith as he has a lot of improvement to make because guys like Jon Jones, Gustafsson and himself are all relentless for 25 minutes and Smith got tired in his fight against Oezdemir by the third round.

Meanwhile, Jon Jones is all set to fight Alexander Gustafsson on Dec. 29 at the T-Mobile Arena in Las Vegas.