A mouthwatering clash between Anthony Smith and Volkan Oezdemir is less than a day away at UFC Moncton and both fighters have had their fair share of trash talk. Smith (30-13) is roaring up the 205-pound rankings,  The 30-year-old Texan, who fights out of Omaha is coming off with back-to-back stoppages against former champions Rashad Evans and Shogun Rua. 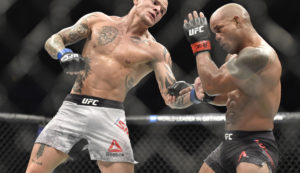 Ahead of his fight, Smith has predicted a dominant victory over Oezdemir, he said:

“I promise you that I’m going to demolish Volkan,” Smith told MMAjunkie at during the UFC Moncton media day. “It’s not even going to be close. I’m telling you: It’s going to be a dominant performance, and what you guys are going to read is that Volkan didn’t even deserve to be at the top, and he just had a quick rise, and no one really knew how good he was, and now we really know that he’s not that good. That’s exactly what you guys are going to read Monday.”

Smith is also hoping to get a shot at the Light heavyweight title next after his win.

“As long as I get to a title shot I don’t care what people say. It doesn’t matter to me. It’s kind of been the narrative my whole career,” Smith said. It’s not about how good I am. It’s always been about how bad my opponents are.

“That’s the narrative I used to try to change all the time, and now I don’t care. As long as I’m opposite whoever wins the Jon Jones vs. Alexander Gustafsson fight, I don’t care.”

UFC Moncton will be co-headlined by a featherweight fight between Michael Johnson and Artem Lobov.