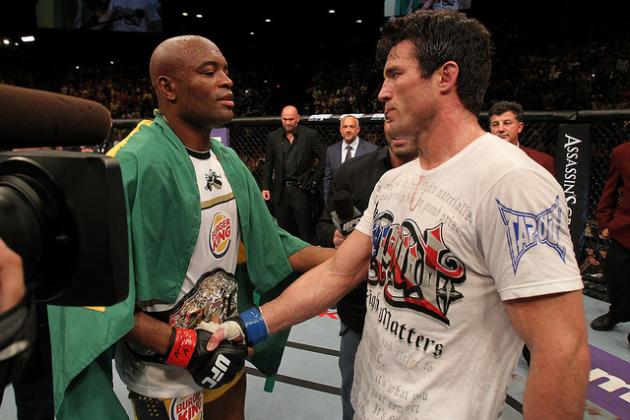 For the better half of his UFC career, Anderson Silva’s name was synonymous with sheer dominance inside the Octagon. Even the end of his reign came due to the very showboating that had garnered him worldwide fame. However, during his reign if anyone came closest to proving Silva’s mortality it was Chael Sonnen.

However, the transformation of Chael into a media person has led to a change of feelings towards his arch rival. From telling Anderson Silva that “he absolutely sucks”, Chael now believes that “The Spider” is an inspiration. After a display of striking masterclass between Silva and Adesanya this past Saturday, Chael was all praises for Anderson.

Anderson Silva is known as a champion, but more importantly, he is now an inspiration. pic.twitter.com/9Ugm8qT38l

“Anderson Silva got to live a large part of his life as a champion, which is very rare and very special”, said Sonnen on the recent episode of Ariel And The Bad Guy. “He’s now in a position that’s rarer and even more special. He’s not a champion. He’s now an inspiration”, added Chael.

Silva’s last opponent was a whooping 14 years younger than him and a likely future champ of the division. He himself was coming off of a long layoff after his previous fight against Derek Brunson.

“Coming back after a layoff. If you wanna go back further, even having had to deal with that gruesome injury against Chris Weidman and going full 15 mins. Even winning, according to one of the judges, the second round against who I believe is not only a future star , but also a future champ in the division. I think Anderson Silva should be very proud of himself.”

The 43 year old future Hall of Famer may not have a lot left in the tank but he has expressed his desire of having a fight in his hometown before he retires.