Former UFC veteran Arjan Singh Bhullar who signed with ONE Championship in July is all set to make his promotional debut on October 13 against Mauro Cerilli at ONE Championship 100: Century event which will take place in Tokyo, Japan. 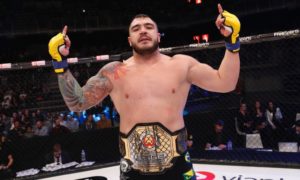 The fight was supposed to take place in Manila last month, but the fight got cancelled after Cerilli suffered an injury and had to pull out of the fight.

The 33-year-old Arjan Bhullar from Richmond, Canada made his UFC debut back in September of 2017 at UFC 215 where he defeated Luis Henrique Oliviera via unanimous decision. He then lost his next bout to Adam Wieczorek via submission, but ultimately ended up winning his next two bouts against Marcela Golm and Juan Adams via decisions.

On the other hand, Mauro Cerilli is a former cage warriors champion and has a professional record of 13-3 and is coming off of a first-round TKO win over Alain Ngalani in march earlier this year.

ONE Championship 100: Century is going to be the promotion’s biggest fight card of the year and it will also feature a record seven World Title bouts. It will feature stars like Angela Lee, Demetrious Johnson and Janet Todd etc.