Artem Lobov has done the unthinkable as he has defeated former two-time world champion Paulie Malignaggi at the BKFC 6 event which took place at the Florida State Fairgrounds Entertainment Hall in Tampa, Fla.

As the fight started, Paulie came forward displaying his jabs to Lobov’s body, which forces Lobov to unload a right hand of his own, which partially connects. However, seconds later Lobov has Paulie in clinches. But Malignaggi ends the round with a hard left. In this round, Artem was looking for a hail mary, but couldn’t land any. 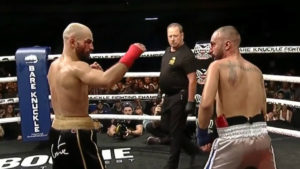 In the second round, Paulie completely dominated with his jabs and body punching. He showed crisp feet movement and circled the ring evading Lobov’s hard punches.

In the third round, Lobov is the aggressor, but he’s failing to land anything significant. On the other hand, Paulie is connecting with his jabs and even though he is not throwing enough, he is doing just enough to knick the rounds.

In the fourth round, Lobov started having huge success, as he landed nice clean left hooks and jabs to Paulie’s body. He then follows up with holding Paulie into a clinch and landing punches while he’s holding him. Both fighters are cut through round 4.

In the fifth and final round, like usual Malignaggi is firing his jabs and circling the ring and Lobov remains the aggressor. although he still isn’t landing anything significant. Paulie evades combination punching from Lobov and the round ends with both fighters showing respect at each other’s craft.