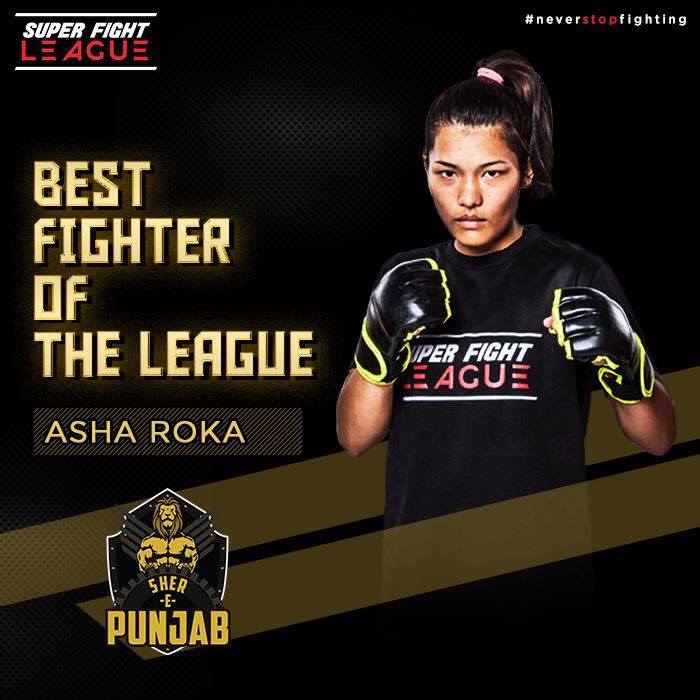 At the age of 11 Asha Roka found herself at her King’s Cross station when she entered the MP boxing academy in Bhopal. She was seeing people run into the barrier and reach platform nine and three quarters but she did not know whether she too was supposed to go there. She after all was visiting the gym where her brother trained and wasn’t even sure what to do. However, the coach at the gym asked her to try her hands on the sport which turned out to be the Hogwarts letter which set her on a magical journey. She had the letter, she knew this was a golden opportunity and she made full use of it. She dashed towards the pillar, crossed the dark barrier and found herself facing her Hogwarts express, the boxing ring. She knew this was not an easy path, she knew that she will be facing many Dementors but she decided to play the gamble and entrained her Hogwarts express.

Seven years later she clearly doesn’t regret the decision as today she stands as one of the most popular woman combatants in India.

Recently I caught up with her. When I asked her how she felt making it this far, it made the 18-year-old chuckle. She simply didn’t have words to describe what it felt like to be that popular at this young age. After all in this very short span she has achieved a lot, she has won a bronze medal at the youth world championship, has amassed a MMA record of 4-0 and has established herself as a household name, it was bound to be difficult to explain all of that in a single go.

The journey she has had so far wasn’t what you call easy. Just like everyone of our athletes, Roka had to deal with the ever draining backstage politics, negative reviews and what not, going through all of that wouldn’t have been possible without the support from her family members. Unlike most, Asha’s family had no problem with her taking up boxing in fact they even supported her and have played an important role in her success. “My family was very supportive of me. They had no problem with me taking up boxing”.

But not everyone is as lucky as her, in most cases women athletes do not get much support from their family members. The fight business is full of negativity and is famous for its notorious back stage politics, when athletes do not get support from family members, the already difficult journey becomes almost impossible to complete. Hence not only women but male athletes leaving a sport because of being emotionally drained by the constant pessimistic reviews, is quite common. Roka expressed her thoughts on the situation by saying it solely depends on the mentality of an individual, some want to achieve and accomplish while the others simply like to pull them down.  “Everything depends on an individual’s mentality. In small societies people always try to lower other people’s morale. No one is ready to understand that sports is a good thing. They just want their kids to study and not give them the opportunity to try their hands at sports.”

“Everything depends on an individual’s mentality”

In fact Roka believes that training in combat sports should be mandatory for women today. Crime against women has been a problem sing long, a major reason why women can’t deal with shady characters is because of lack of training in combat sports. Roka believes that training in MMA might help girls in defending themselves, not only that but training in combat sports has a very positive impact on an individual’s life. It helps them in staying physically fit, improves concentration and helps in breaking monotony, making life more exciting. Roka said “If you’re a girl you need to learn self defense. Today crime against women has increased a lot, it is necessary for you to know how to defend yourself. Even if you don’t want to take combat sports as a career, I think it is necessary for you to learn self defense.”

“If you’re a girl you need to learn to self defense. Today crime against women have increased a lot, it is necessary for a girl to know how to defend herself.”

Asha has gained a lot of popularity since taking up MMA but MMA wasn’t something she had thought much about. In fact Asha tried her hands on MMA because of the negative and ever draining backstage politics around boxing. Not so long ago Asha’s only aim was to win an Olympic gold for her country in boxing, but she found herself embroiled in the dark end of the sport which was very hard on her and even resulted in certain problems between her and the association. This was when one of her friends, Amit Raj advised her to try her hands at MMA. He told her she was a good fighter and encouraged her to give MMA a try. 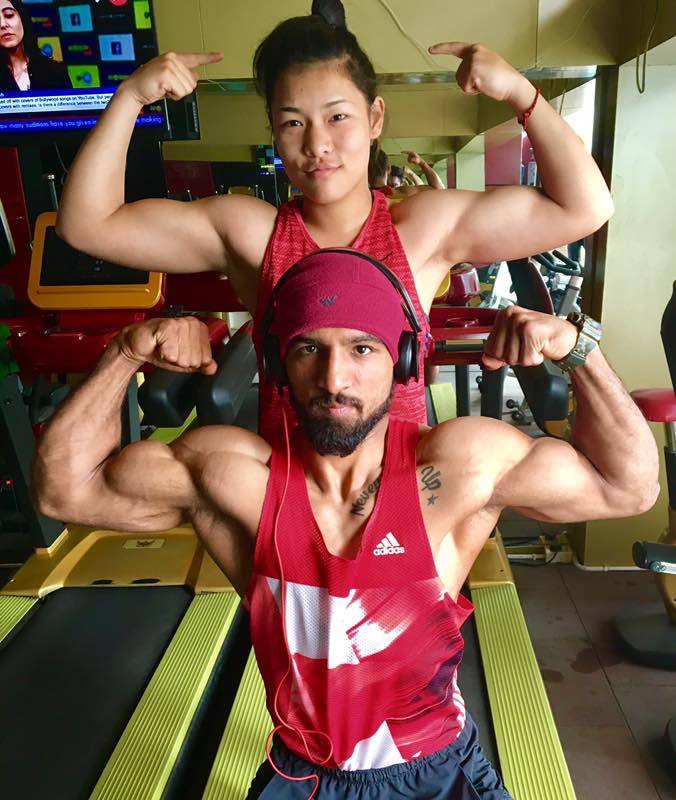 Asha too wanted to try her hands at the sport but the people around her clearly didn’t like the idea. “No one supported my decision of taking MMA as a career. People around me had heard a lot of bad things about MMA and were convinced that there is no future in this sport.”

“No one supported my decision of taking MMA as a career. People around me had heard a lot of bad things about MMA and were convinced that there is no future in this sport.”

Asha decided to listen to herself and decided to take the risk. Fortune favors the brave, the decision made by Asha to try her hands at the sport turned out to give results, better than she expected. She didn’t only win all the fights she competed in but she also won the award of the fighter of the season, which got her both glory and riches. The 18-year-old however didn’t have an easy time making the transition from boxing to MMA.

She came from a standup background and had no prior experience in MMA. To make things worse she was competing with some of the most talented Indian women MMA fighters and trained foreign veterans. Her very first fight was against someone who came from a grapping background. She entered the fight with an aim to Knock her out. “My very first MMA fight was against someone who was very experienced. I come from a boxing background, so I had to keep the game standing. I had learnt the basics of the ground game but I did not have much experience in grappling. Hence I entered every fight with the aim of knocking out my opponents.”

There was quite some hype around Asha’s debut. She was a successful amateur boxer and was the youngest women fighter competing in the league. She was making her debut against Angel Pink, a veteran who had in the past faced the likes of UFC contender Cindy Dandois and hot prospect Yanan Wu. Hence despite the hype around her, Asha was the underdog in the match. The girl from Bhopal however defied the odds and didn’t only win the match in the very first round but she did it in a legendary fashion as she knocked out Pink in 18 seconds.  Asha in her debut delivered beyond her hype. She repeated the same story in her next 3 matches as she finished all her opponents in the very first matches earning her the tag line “Asha Roka jise koi na rok saka”.

SFL re-launched themselves by coming up with the idea of the first ever MMA league. This re-launch came after the failure the company faced in their first run when they tried to launch themselves in India. The first run earned SFL a lot of bad name in the MMA community because of failures of delivering their promises. But this time round, things have clearly improved. Asha confirmed  that the league had given them what was promised. “I do not know what happened last time. I was given whatever I was promised.”

The league was criticized earlier for multiple reasons on various platforms. Some of the major issues being fighter safety, not paying athletes and allowing doping. Asha made it pretty clear that she as a competitor in the league faced no such problems. “No. As I have said they did not break any of their promises. We all had backup fighters. If a fighter was injured or wasn’t ready to compete then the backup fighter fought instead of him. We had medics and they took care of our safety. I cannot say for others but I was given the amount promised to me. SFL was very supportive of me and we were given an advance amount even before we fought.”

“SFL delivered all its promises and were very supportive”

Asha’s statement does provide a lot of clarity around the new SFL management. Asha made it clear that she didn’t face any problems during the league. She even made it clear that when she says that she never faced any trouble she was singularly talking about SFL and had no idea what went on in the other Indian MMA promotions. 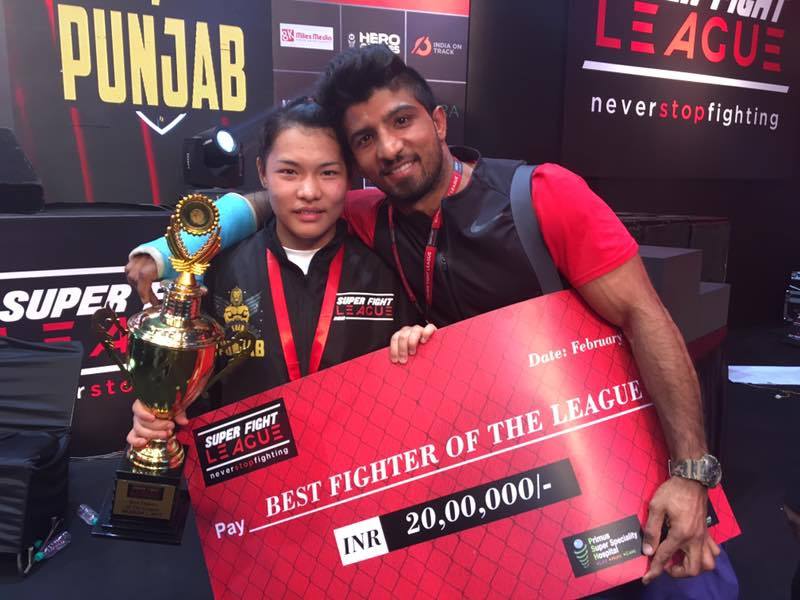 Roka gained a lot of popularity by fighting in MMA but the  undefeated teenager hasn’t forgotten her main goal, an Olympic Gold Medal. She clearly enjoyed fighting in the league but her aim remains the same. “My aim is to win an Olympic Gold Medal in boxing. I will try to do so in 2020 Olympics.” Despite fighting in the flyweight division in the league, Roka has no plans on continuing in that weight class. “No I will not continue in the flyweight division. I plan on fighting in 52 KG or 48 Kg. Flyweight isn’t my natural weight class.”

“My main aim is to win an Olympic Gold Medal, I will be trying to do so in the 2020 Olympics”

The journey so far hasn’t been easy and the journey ahead won’t be easy for her too but Asha is ready. She has in the past overcome adversities and she will continue to beat the odds. Asha Roka is ready to takeover. Before she signed out of our conversation she wanted to thank the people who made her what she is today, her fans. “Thank you for your constant support. It means a lot to me. Again even if you don’t want to take up MMA as a career, train in it. Do it so that you can defend yourself.”

“Thank you for your constant support. It means a lot.”