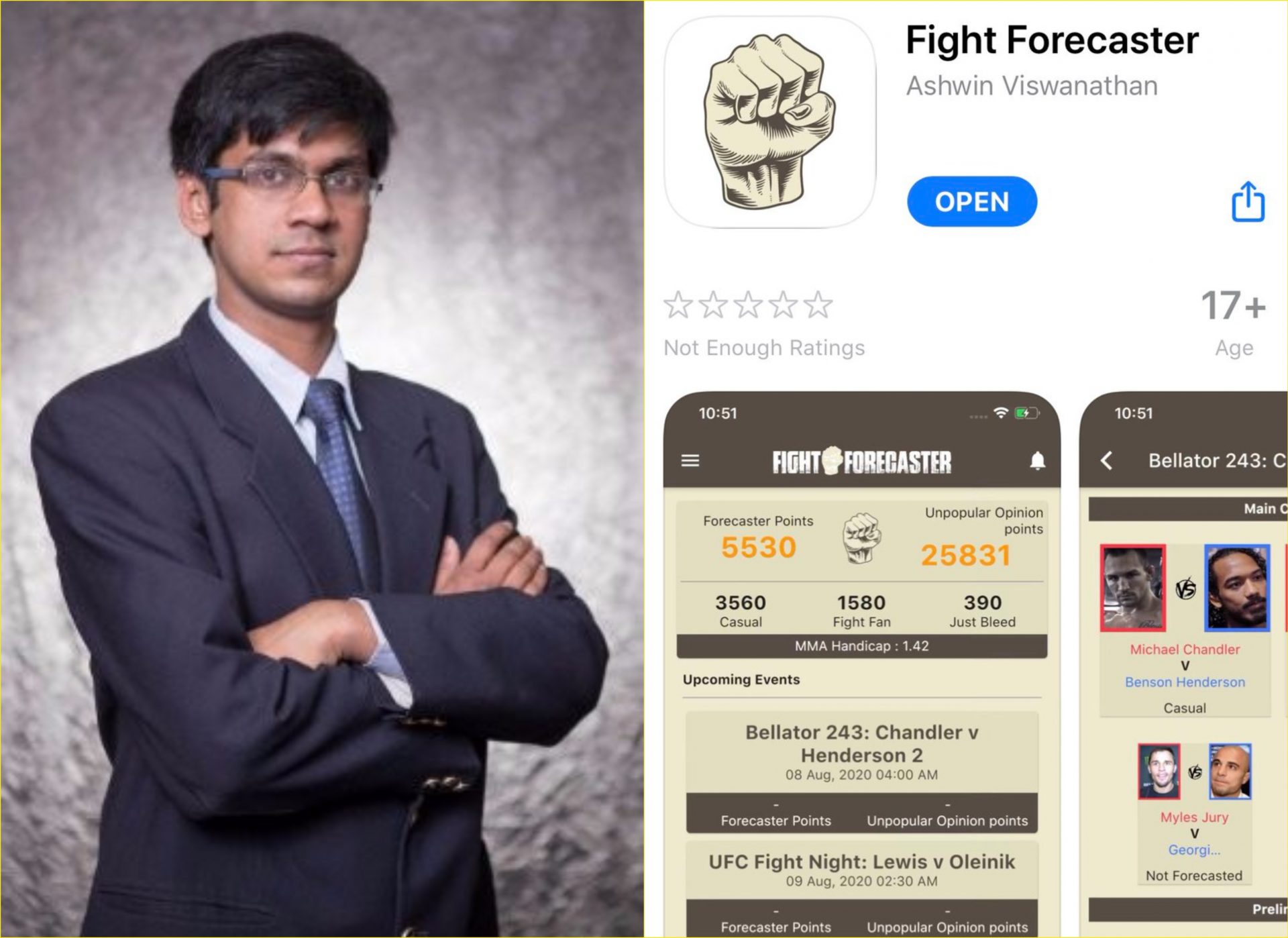 MMA is one of the fastest-growing sports in India as well as globally. Very few sports boast of as diverse a fanbase as MMA.

The rise in popularity of MMA has seen in fantasy sports operators bring MMA matchups to their platforms. While these fantasy match-ups bring in a lot of users, there’s a niche market for other developers that are building apps for MMA that target a much different user base.

While behemoths like Fanduel, Draftkings and Dream11 operate in specific country/region, Bangalore based MMA fan and lawyer Ashwin Viswanathan has developed a ‘Pick em’ app for MMA that is used across geographical boundaries. The 31-year old developed ‘Fight Forecaster’ app to cater to the wider audience that allows users from any country in the world to sign up and predict/forecast upcoming MMA fights. Users are ranked on the basis of the accuracy of their forecasts.

MMA India Show had the opportunity to catch-up with Ashwin Viswanathan, where he gave us an inside look at the operation of the app and the vision that he has for the ‘Fight Forecaster’ app.

1.) How did the idea of something like an MMA app come to your mind?

So I have been a fight fan for a while and I also realised that a big part of enjoying the fight is not just watching the fight, but all the anticipation that comes before each fight. The reason some fights are more interesting than others is only partly because of the star power of some fighters. Often it’s stylistically intriguing fights that make great match-ups. Fight fans understand this.

Take the example of Tony Ferguson vs Khabib Nurmagomedov, which unfortunately hasn’t happened yet, but maybe the most anticipated fight in MMA history. One of the reasons it’s so interesting is because we have two very impressive and accomplished lightweights. But also stylistically, Tony has such a strong submission game off his back which matches up great against someone like Khabib, who’s got the best takedowns.

It’s this anticipation that most fight fans enjoy. It’s because of this that making picks, and putting your picks out there, and sharing them with your friends is a big joy of being a fight fan. Outsiders don’t entirely realise this.

Also, the fight game is very unpredictable and many times an upset occurs which only a few people predict. So that’s the reason I introduced a probability-based ‘Fight Forecaster app’.

2.) There are numerous ‘Pick em MMA apps’ in the market, what does your offer different for fight fans to choose?

Needless to say that all prediction apps will have some similarities in terms of the event that they target and in terms of the moralities of the gameplay. SO I think the two big unicorns in the west are Fanduel and Draftsking have a more detailed system, where they care about things like significant strikes and where you don’t really pick winners, but you make a lineup so you have things like significant strikes, takedowns attempted. Even the more serious fight fans, while paying attention to these statistics in trying to pick a winner are more interested in who wins the fight. There are a few apps out there that offer the prediction mechanism based only on this….one example is the Verdict app and the other is Fight Pick app and of course, there’s Fight Forecaster. 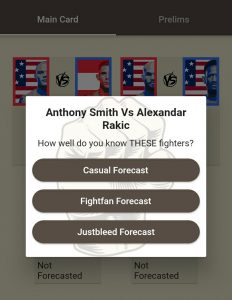 But what makes Fight Forecaster a better app than all the other apps out there is the flexibility in making your picks. The most interesting MMA fights are often the ones that are closest on paper and which are very hard to predict. It becomes easy to get your picks wrong because you went with a gut feeling or because you feel that you favoured fighter has every advantage on paper. But most fight fans know that there’s a very good chance of a fight going one way or the other and for that, I added a percentage based concept where you can actually pick against a fighter and still get points for it provided you gave them some reasonable chance of winning.

I have also introduced a three-prong prediction system where the more specific you make your prediction, the more points you get. I have called them ‘Casual’, ‘Fight Fan’ and ‘Just Bleed’ borrowing terms commonly used on #MMATwitter. In the Casual mode, you only pick the winner.  In the Fight Fan mode, you pick the winner and the method of winning. Also, there’s no shortage of fight fans who spend 80 hours a week studying tape and those guys will probably want more high stakes in the game, they not only pick the winner and the method of victory, but they also pick the round, so we have ‘Just Bleed’ mode for them.

Obviously you have a choice before each and every fight that comes up and while making the choice there’s a trade-off that you’re making, so if you’re very confident or if you need a lot of points you would probably go for this level.

3.) How are points assigned in the Fight Forecaster app? 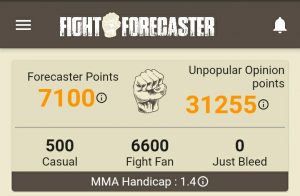 4.) There’s also an unpopular opinion point section, please explain to us about that portion.

The Unpopular Opinion points are a measure of how good your forecasts are compared to the crowd.

5.) How much time do you spend on the app as far as backend development is concerned?

I spent quite a lot of time on the backend actually. I am a non-technical founder. I am a lawyer by qualification and I have worked as a lawyer for eight years. But I started working on this app from the beginning of this year and the wireframes and game designs is something I have worked out on my own while getting the coding done through hired developers.

6.) How much time did you invest in making this app?

A lot of hours to be honest. One of the complications that happened was the Coronavirus. It became very hard to monitor the progress of work as there was no face to face visibility. It was also the first time I was working on the tech side of things. I have been coordinating on a whole bunch of other things in relation to the app. One of the things that I should mention is that the logo for this app was actually also designed by an MMA fan on twitter, Dave Fretz, who also does a lot of design work.

I kept sending out work in progress versions to a whole lot of fight fans on Twitter and got feedback from them and then went back to the developers and offered them a whole new set of instructions.

So a lot of work has gone into the app.

7.) Going forward do you plan on monetizing the app?

Eventually, that is the goal. The plan is to first reach a critical mass of users. We are still in the range of hundreds of users though we are growing quite rapidly.

Once we hit thousands we will probably be in the position to pitch it to the right investors. I honestly feel that it’s the right app at the right time. MMA is a niche sport globally and in India, but I feel it’s only a matter of time before it really explodes on to the world stage. Even if you look at my current user base, while India has a big number of users, there are a large number of users from the US, the UK, Canada, Mexico, Norway, Australia, Switzerland, Saudi Arabia, South Africa, Pakistan, Serbia, Sweden and a whole host of other countries. I am sure it will only keep growing.

8.) Have you ever reached out to any MMA fighter to promote your app?

I am also in the process of building a team and I am talking to potential co-founders from India and abroad. But at some point, I will be reaching out to fighters.

9.) Since India makes up a large chunk of your user base and with the recent surge in fantasy sports in India, do you feel that if someone like Dream11 tries to enter the MMA space in India, then your growth will be hampered?

Obviously the budget that Dream11 has is massive. They spent close to 700 crores ($94 Million) last year in advertisement. But there’s a case to be made that MMA has a different fanbase when compared to other sports.

When you’re a fan of one sport, you tend to be a fan of multiple sports. A basketball fan won’t exclusively be a basketball fan and there’s a certain type of persona associated with that. There are those hardcore sports fans also who are MMA fans, but there are a whole lot of fans who are exclusively combat sports fans or MMA fans or fans who came over from being a pro wrestling fans, so the personas are a little bit different and I think obviously there’s some amount of expertise involved there.

10.) Where do you see ‘Fight Forecaster’ five-years from now?

Hopefully, Fight Forecaster is a very large entity by then. The benefit of starting now is that we get to learn from the mistakes of the bigger entities, or at least whichever mistakes get recorded in the public domain.

Hopefully, it shouldn’t take us long to reach a million users or more. We are aiming for a more global user base for probably the most global sport.