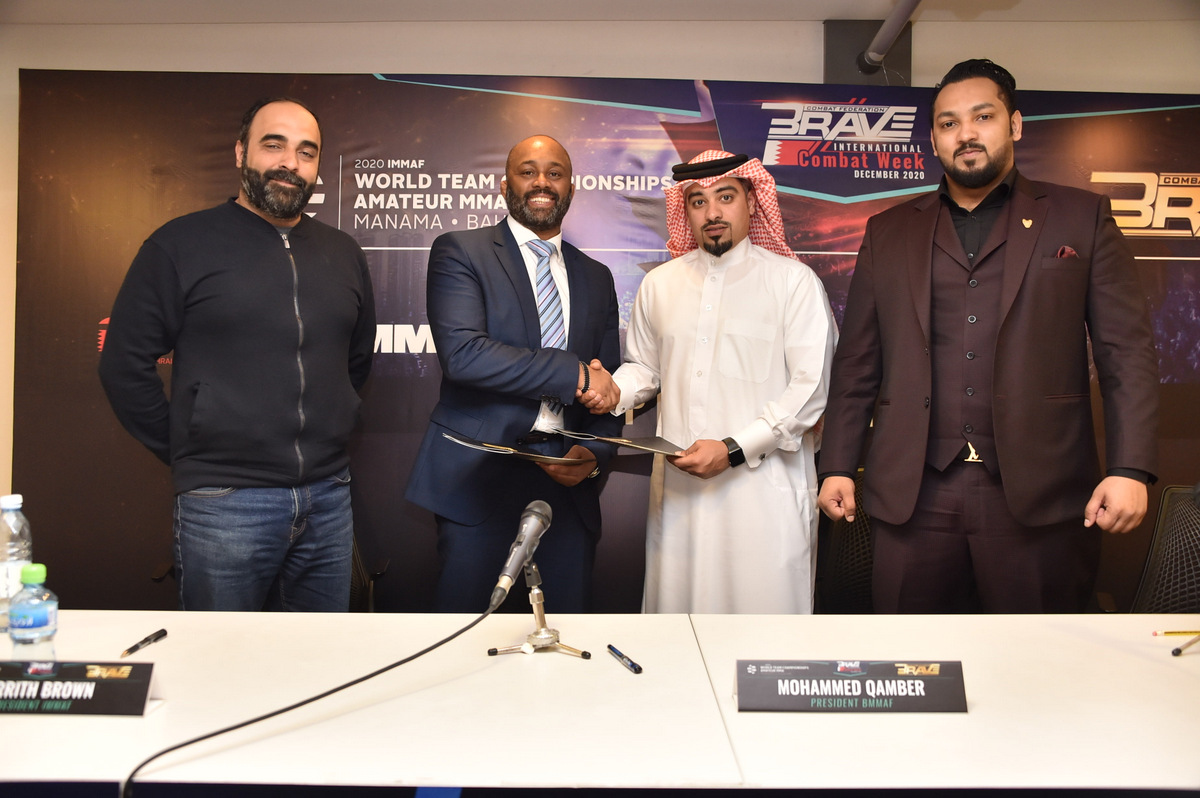 Brown: “Bahrain Is A Preferred Destination To Host MMA Championships”

Qambar: “Hosting This Championship In Bahrain Confirms Its Prestigious Position In The Sport”

Shahid: “Bahrain Has Gained IMMAF Confidence Thanks To The Vision of HH Shaikh Khalid”

The Kingdom of Bahrain is hosting the first edition of the World Mixed Martial Arts (MMA) Teams Championship, as Bahrain MMA Federation (BMMAF) confirmed that it is organising the event from December 1, 2020, to December 5, 2020, in cooperation with the International MMA Federation (IMMAF) and Brave Combat Federation (CF).

This was announced in a press conference held on February 29, 2020, at Bahrain National Stadium in Isa Town, in the presence of Bahrain Combat Sports Council Member and Bahrain Jiujitsu Federation President Mr. Redha Ibrahim Monfaridi, as well as representatives of local and international media, the participating teams and MMA training centres in the Kingdom.

Addressing the attendees, Mr. Brown said: “Firstly, I would like to express my pleasure to be in my second country, the Kingdom of Bahrain, this beautiful country that I always enjoy being in. Bahrain has demonstrated to all its great ability to host various international sporting events, especially the World Amateur MMA Championship, which it was hosted for three consecutive years. The Championship was distinguished by its organising which exceeded expectations, thus making Bahrain a major and preferred destination for the IMMAF to host its activities and championships.”

Mr. Brown added: “This year, IMMAF is introducing a new championship for the teams, with the aim of continuing efforts to support the development and progress of this sport. We announce in this conference that the Kingdom of Bahrain is hosting and organising the first edition of this championship, as we reiterate our confidence in Bahrain to achieve renewed success at the level of organising the IMMAF championships.”

For his part, Mr. Qamber stated: “The announcement of organising this first-of-its-kind championship in the Kingdom of Bahrain confirms the prestigious position the Kingdom occupies in this sport. This is owed to the support offered by the Wise Leadership of Bahrain and the efforts dedicated by HM the King’s Representative for Charity Works and Youth Affairs, National Security Advisor and Supreme Council for Youth and Sports President HH Shaikh Nasser bin Hamad Al Khalifa, and Supreme Council for Youth and Sports First Deputy President and Bahrain Olympic Committee President HH Shaikh Khalid bin Hamad Al Khalifa, to further improve the Bahraini youth and sports movement.”

Mr. Qamber also noted to the efforts paid by Bahrain Combat Sports Council President HH Shaikh Salman bin Mohammed Al Khalifa to apply the necessary mechanisms set by the council to implement the directives of HH Shaikh Khalid, with the aim of continuing the development of MMA sport, adding that this has positively reflected on the sport, especially with Bahrain topping the international MMA ranking last year.

Explaining further about the upcoming championship, Mr. Qamber announced that 16 teams for men from different countries will compete for the title, while eight women teams are participating. He confirmed that a total of USD360,000 has been allocated for the prizes of winners, as the first, second, third and fourth place winners of the men’s category will receive USD100,000, USD70,000, USD50,000 and USD30,000, respectively. Mr. Qamber said the first four teams in the women’s category will receive cash prizes of USD50,000, USD30,000, USD20,000 and USD10,000.

Commenting on the announcement of the Championship, Mr. Shahid said: “Thanks to the wise vision of HH Shaikh Khalid to improve the sport, the Kingdom of Bahrain was able to assure the world of the success of its experience in MMA in a record time. Today, we’re reaping the fruits of His Highness’s wise vision and goals to promote Bahraini MMA sports on the international level.

He added: “The IMMAF renewed its confidence in Bahrain for the fourth time, but this time with a new championship, to assure the world that Bahrain is its main hub to host its main championships. This came as a result of the efforts dedicated by the Kingdom to organising the World Championship in the past three years in a distinguish manner. This gave Bahrain absolute confidence from the IMMAF to host the first edition of the World MMA Teams Championship on its soil.”

The agreement of organising the Championship was signed by Mr. Qamber and Mr. Brown by the end of the conference.