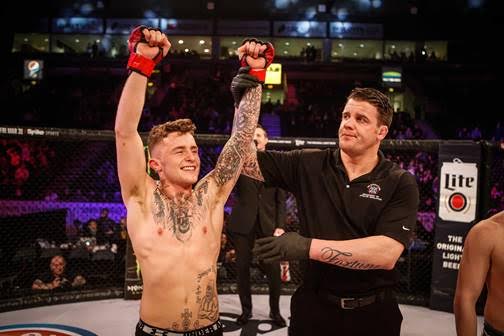 After the initial disappointment of Fedor not competing at Bellator 172, Bellator MMA traveled to Northern Ireland for Bellator 173. Former Bellator Light Heavyweight Champion, Liam McGeary was initially scheduled to face Chris Fields; however, just days before the event, Fields was pulled from the card due to an injury, and was replaced by Brett McDermott.

The co – main event witnessed a showdown between the new face of Irish MMA, SBG’s very own James Gallagher, as he faced Kirill Medvedovsky. Kirill was coming off back to back losses, while Gallagher had won all of his five professional fights going into the event. At just 20 years old, the SBG product was looking to make a statement, and told us in an exclusive interview before the fight that he was going after the featherweight title, and expected to win the title by the end of 2017.

Also on the card was Sinead Kavanagh, who looked to use her home advantage to cruise past Iony Razafiarison.

The night started well for the Irish faithful, as Shay Walsh picked up a unanimous decision victory over James McErlean in the first fight on the main card.

Alex Lohore then fought Colin Fletcher in the second bout, and although Lohore got tagged early and was dropped, he came back strongly to secure the back of Fletcher, and proceeded to choke him out in round 2 to secure a submission victory.

The third fight of the night was a one sided affair however, as Iony managed to pick Sinead apart with a constant barrage of jabs and combinations. While Sinead managed to go the distance, she lost every round decisively, and Iony won the contest by unanimous decision, with a couple of 10 – 8 rounds for Iony. 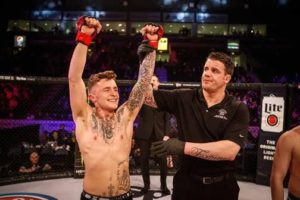 In the co – main event, featherweight prospect James Gallagher took on Kirill Medvedovsky, and going into the fight, James told us that he would be comfortable in any predicament – whether it was on the feet, the grappling exchanges or in the wrestling department. And as predicted, James immediately went on the prowl, getting the upper hand in the early exchange on the feet.

Kirill showed weakness in the grappling department last time around, when he was apprehensive while going to the ground against Karakhanyan. Gallagher took Medvedovsky’s back in the second minute of the first round, and finished him with the RNC.

Post fight, James was asked about AJ McKee, and Gallagher had some rather unflattering words for the other undefeated prospect. Gallagher called McKee out, and said he would strangle him, inviting him for a fight on the London card later this year. 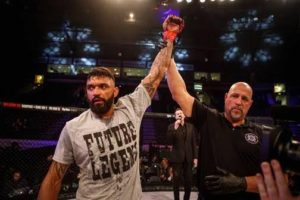 Liam McGeary pummels McDermott; sets up a showdown with Vassell

Former Bellator LHW champion Liam McGeary returned to the cage this past weekend, as he looked to bounce back from the loss at the hands of Davis late last year. McGeary dropped the Bellator LHW title to “Mr. Wonderful”, and looked to make a statement against the last minute replacement.

McGeary was initially scheduled to face Chris Fields, but after Fields was pulled at the last minute due to an injury, McDermott stepped in to face the former champion. As expected, McGeary pummelled Brett, turning his face into a bloody mess with his precise jabs and crisp boxing. McDermott managed to drop McGeary early in the first round, but the former champion retaliated with a barrage of combinations, followed by a head kick and a flying knee to turn Brett’s face into a crimson mask.

The doctor then entered the cage and stopped the fight, deeming McDermott unfit to carry on just after the first minute of round number two. McGeary is now expected to face Linton Vassell at Bellator 179.

Here are the complete results from Bellator 173.