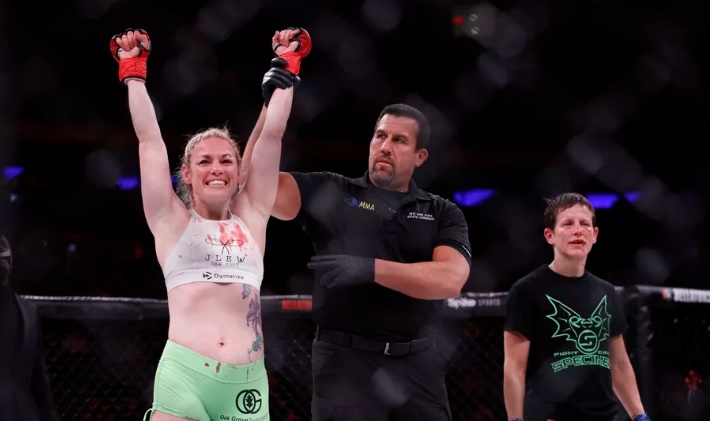 Bellator just wrapped its biggest event ever at MSG with an attendance of over 12,000 fans and it turned out to be a crazy event full of weird instances and surprises. It was a night of upsets as two champions lost their belts and so did the two legends.

The boxing sensation had her hands talking all through the fight as she kept on landing those over hand rights on Alice Yauger. Heather ‘The Heat’ Hardy the women’s boxing champion transitioned to MMA and it was evident right from the start that she’s a champion for a reason. Round 1 saw Yauger clinching Hardy with the intention to neutralize her boxing. Come round 2 and Yauger is now looking for some early takedowns but Hardy won’t let her any. Hardy kept on finding her target and landed some nice shots. In round 3, Yauger accidently head butts Hardy and that opens a cut on her left eye. A sweet counter combination from Hardy drops Yauger to the mat and gets done with just 13 seconds left in the third round. 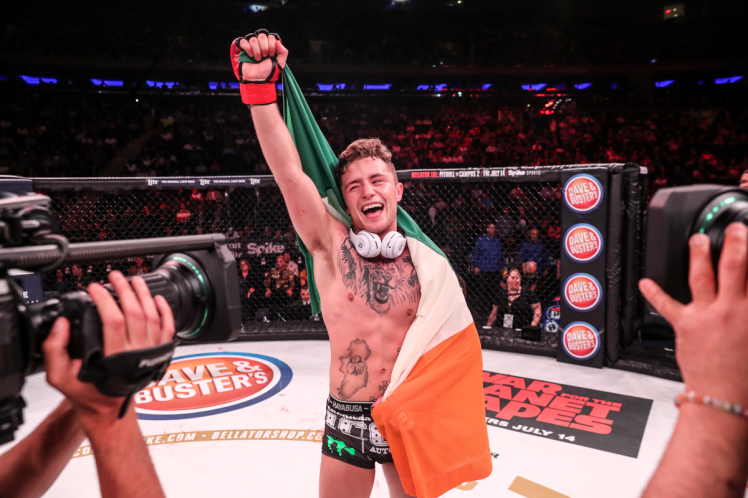 James ‘The Strabanimal’ charged ahead as the round began to quickly take the centre of the cage. After few moments of both fighters measuring up its James who takes down Chinzo. He quickly takes the top position and lands some shots while Chinzo starts bleeding from his left eye. James then transitions to take control of Chinzo’s back and within seconds wraps the choke around Chinzo’s neck to tap him out. That was a quick win for the Irish fighter who predicted the win as he made choke signs whenever he and Chinzo faced off during the promotions. James Gallagher continues his winning streak and improves his record to 7-0

A split decision victory earned Ryan Bader his first title belt who managed to edge out Mr. Wonderful in their second outing. This fight was no different from the first one, as both the fighters began the first round on a slow note. There was very little action in round two except for few leg kicks thrown by Bader and Davis. In round 3, Davis lands a superman punch while Bader manages to take down Davis but unable to capitalize as the round ends. In the fourth round, referee Dan Miragliotta had seen enough of the inactivity and warns both the fighters. In the fifth round, Bader secures another take down but Davis was quick to get back to his feet.

After five rounds of back and forth action, it was the reigning champion Douglas Lima who raised his hand via unanimous decision. Lorenz Larkin was unable to outstrike Lima all through the five rounds. Whenever he did try to engage, Lima responded back with his own flurry of punches making it a tough night for Larkin. Round 1 was all about feeling each other out as none of the fighters wanted to make any mistake. Round 2 saw more action on Larkin’s part as he unleased strikes but Lima responded with his own left hook and dropped Larkin on the ground. Larkin came back in the fourth round but that was not enough to put the champion way. A tough night for Larkin as his Bellator debut didn’t quite go his way. 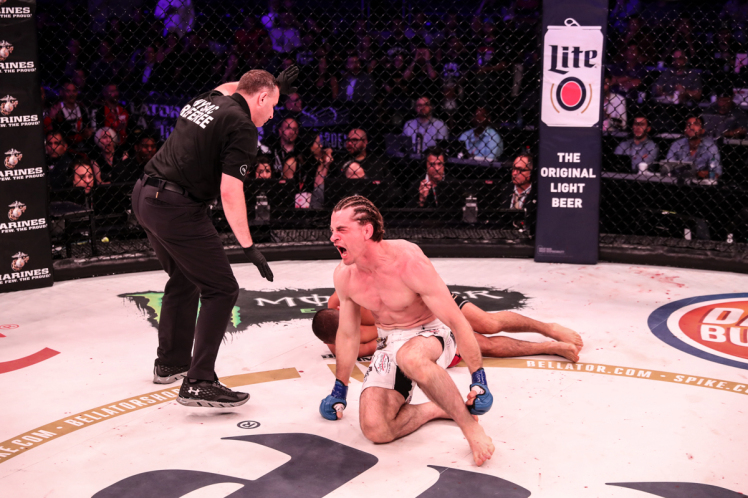 Zach Freeman did the unthinkable – Spoiled the debut of highly touted Aaron Pico by submitting him in just 24 seconds of the very first round. All it took for Zach was a well-timed right upper cut that dropped Pico on to the canvas and everything went downhill from there. Zach immediately pounced on the back locking up a short guillotine from the half guard position. Pico had no answer and went into survival mode to quickly tap out. 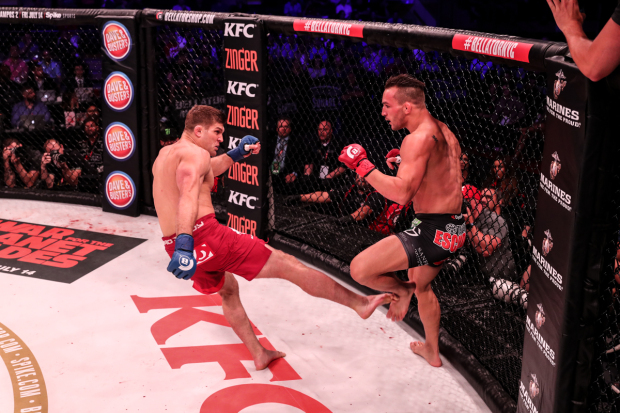 In a strange turn of events, Michael Chandler who was defending his lightweight belt injured his left ankle in the first round and was unable to continue the fight. Brent Primus the much larger guy in the cage begins the round with his leg kicks. He lands a heavy thigh kick which gets Chandler’s attention. Primus throws a roundhouse kick which Chandler backs off to and twists his left ankle. Primus jumps in with a flying right knee and begin to persuade, while Chandler has difficulty using stabilizing his lead leg. Primus notices this and lands few more leg kicks backing off Chandler to the cage. The referee interferes and calls for a timeout to check Chandler’s ankle. The doctors step in and give their decision to end the fight as Chandler’s ankle is not in a good condition.

MITRIONNE KNOCKS OUT THE LEGEND 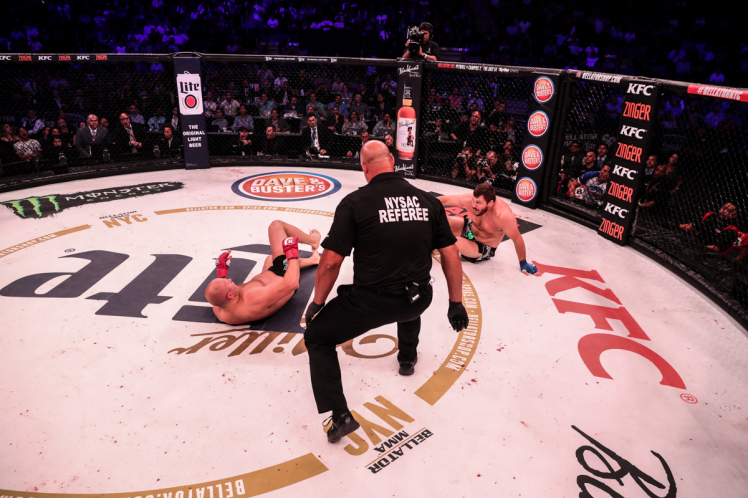 It’s a first for a professional MMA fight to witness a double knockdown and it happened when both Fedor & Mitrionne landed their punches at the same time. Round 1 began with both the fighters been cautious of each other’s heavy hands as Mitrionne bounced around while Fedor ready to unleash at any instance. They both go for their short right hands landing perfectly on each other’s chins and at the same time hit the ground. Mitrionne is the first to recover and quickly jumps over Fedor who is still unable to get back to his feet. Mitrionne finishes with a barrage of punches as Fedor laid out cold on his back. 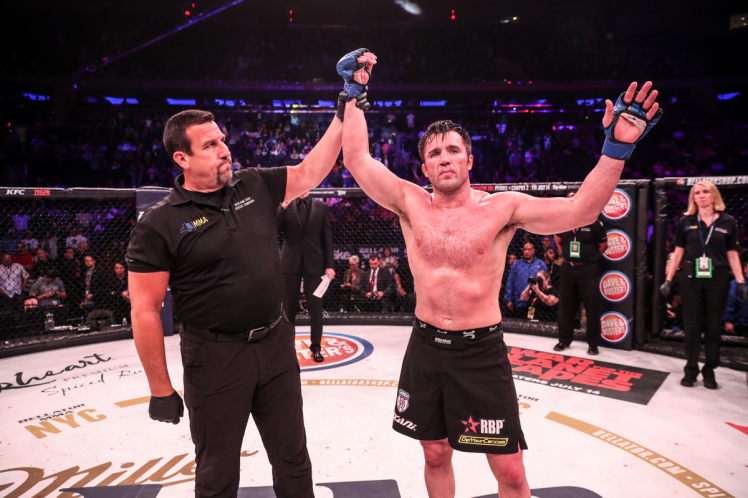 The fued comes to an end or has it just begun? The American Gangster did exactly what he promised all through the time leading up to his grudge match against Wanderli Silva. It was Sonnen’s wrestling that kept him ahead on the scorecards. Wanderli Silva could not stuff the takedowns and get off his back whenever Chael attempted one. The Brazilian Legend spend most of the time on the back all through the fifteen minutes, as Chael pushed forward in every round. All three judges score a unanimous decision win for Chael as Silva stood their dissatisfied by his performance.