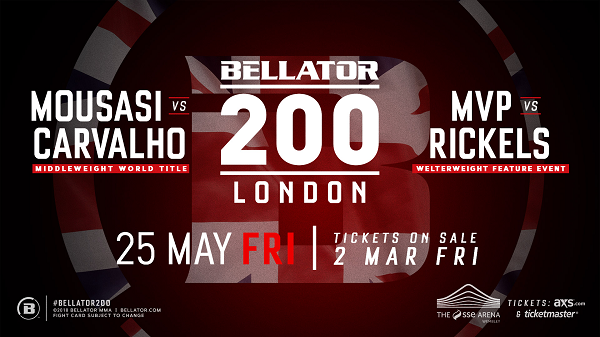 Bellator MMA have been knocking on the UFC’s doors, trying to knock them off their perch. Expanding to other markets and nations apart from the Americas, is certainly a top priority for both the UFC as well as Bellator. While the UFC already do have a well-established fan base in Europe, their rivals still have a lot of ground to cover in Europe. However, Bellator MMA have now created a lot of sensation by revealing their plans about their upcoming Bellator 200 event, which is scheduled to take place in London.

Bellator MMA is run out of Santa Monica, California and are owned by Viacom. They are currently the second largest MMA promotion in the world and are run by the former Strikeforce president, Scott Coker. Strikeforce was previously the second biggest MMA promotion and had started to rival UFC’s popularity. However, it was then bought by the UFC to somewhat maintain their monopoly over the market. Bellator aren’t a pay-per-view based fight promotion and their events are instead broadcasted on Spike TV.

Bellator 200 is expected to have names like Gegard Mousasi and Michael ‘Venom’ Page. Mousasi who is currently on a six fight win streak, was previously under contract with the UFC. He last fought and defeated Chris Weidman inside the octagon at UFC 210 via TKO due to knees. He then made his Bellator debut against Alexander Shlemenko at Bellator 185 and won the fight via a highly controversial unanimous decision. On the other hand, ‘Venom’ Page last fought at Bellator 165 and will be making his highly awaited MMA return.

The news about Bellator 200 was initially broken by noted MMA journalist, Luke Thomas. He revealed that Bellator is planning a huge marquee event for London. He also revealed that Gegard Mousasi will challenge for Rafael Carvalho’s middleweight title and that MVP will be making his return to MMA. Here’s what he tweeted: 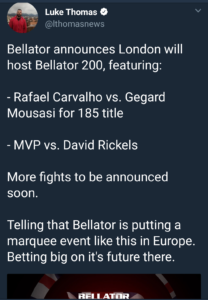 The Bellator 200 card is already looking great. This is surely a great step by Bellator to market itself in Europe.

Previous articleUFC: Nik Lentz proposes a solution for controversial knees
Next articleBoxing News: Scott Westgarth dies due to injuries sustained in a bout