Bellator 224 took place at WinStar World Casino in Thackerville, Oklahoma and was headlined by a women’s featherweight fight between Julia Budd and top contender Olga Rubin. 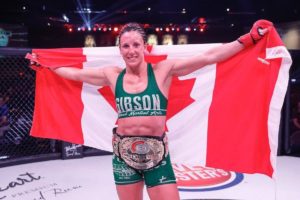 This fight was a walk in the park for Julia Budd who knocked out Rubin in the first round with a brutal body kick. The kick landed at 2:14 of the first round. This was Budd’s third straight successful title defense. With this win, Budd improved her overall MMA record to 13-2 and she is currently riding on an 11-fight winning streak.

The kick & that right hand 😧@JuliaBudd with her best performance yet 💎 pic.twitter.com/hszAXCg7UY

Previous article
The Rock absolutely smelled Gamebred’s 5 second KO of Ben Askren
Next article
VIDEO: Amir Khan knocks out Billy Dib in the fourth round, calls out Manny Pacquiao after the fight