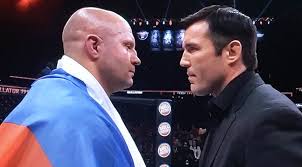 Bellator officials have finally announced the date and venue for one of the most anticipated fights in its calendar. The ‘Last Emperor’ Fedor Emelianenko is scheduled to face the ‘American Gangster’ Chael  Sonnen in New York City at the Bellator 208 event on October 13th.

Sonnen  Vs Emelianenko is part of the semifinal round of Bellator’s eight-man heavyweight grand prix. The winner of the tourney will be awarded Bellator’s vacant heavyweight title. The American Gangster is coming off a decision victory over Quinton Jackson in his last bout.  Emelianenko got his ticket to the semis after scoring a 48-second TKO win over former UFC champ Frank Mir.

Emelianenko is considered one of the greatest fighters of all time and Sonnen possesses a gangster persona which cannot be replicated by any other. These titans are definitely not at their prime anymore and have passed their best days, but that is not going to stop the PPV records going sky high during this 21st-century Russian-American war.