Benson Henderson was known as the decision machine during his UFC tenure. He racked up an impressive 11-3 record in the UFC, which culminated in him being crowned the UFC lightweight champion. His UFC run was marred by very close decision victories. 9 of his 11 wins went the distance, including three title fights (Frankie Edgar x2, Nate Diaz). 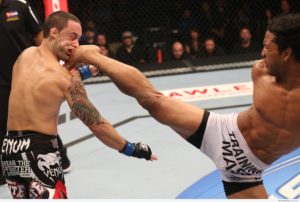 Benson’s Bellator(1-3) adventure however has taken a sort of U-turn. Benson has fought and lost for both the Bellator LW and WW title. He has been at the wrong end of decisions in all his Bellator losses. He is now looking to come back and has promised to finish his opponent, this time around. Here’s an excerpt from his interview with MMAJunkie

“For me, for a long time it’s been about finishing fights,” Henderson told MMAjunkie. “I had a good run where I won a lot of close decisions and close fights. That was a great, amazing feeling, it was wonderful. Now I’m on a little run where I can’t win a decision to save my life. It doesn’t matter what the reason is. If I know I’m not going to win a decision then hey, no problem. I’ll accept that challenge.”

“If it’s not just me and my opponent, but it’s me against three judges who are all against me, then OK, no problem. I accept that challenge. I will get nothing but finishes and work my butt off. I need to take the blame. I accept full responsibility. Not getting a win is my fault. I need to get a finish then by all means.”

Benson Henderson will now face the once highest rated prospect in MMA, Roger Huerta. Huerta at one point sported an incredible record of 20-1-1, and was on a crash course to become the UFC LW champion, but things came crashing down for reasons unknown. He is on a trail back up the ladder now, and is currently on a 2-fight win streak.

Benson forced Bellator to make it a LW bout

Bellator initially wanted the fight at catch-weight or welterweight, but Benson had other ideas. He has lost his last two fights at LW, and is looking to kick start one last run to the LW title. This is what he had to say with regards to his road back up to contention.

Bellator 196 goes to floors this Saturday night at Budapest Sports Arena, Budapest, Hungary. Don’t forget to follow all the action on MMAIndia.