Bellator: Chael Sonnen was caught off guard after Fedor’s fight 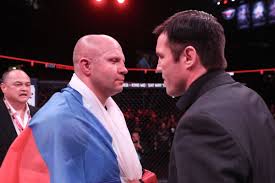 Chael Sonnen was reportedly caught off guard when he was asked to report to the cage immediately after Fedor Emelianenko’s knockout win over Frank Mir at Bellator 198. Chael was working as an analyst at the Bellator desk inside Allstate Arena, Illinois where the officials wanted to promote the next fight in the Bellator Heavweight Grand Prix which would be between Chael and Fedor.

“It was a nuisance for me, honestly,” Sonnen told ESPN. “I was at the desk doing my job and they told me to go down. I didn’t know what that would entail. The next thing I know, there’s a microphone in front of me, but Fedor is looking away.

“I don’t resent anybody for having me do it, but if I could redo the whole thing, I wouldn’t do it. I’m talking to Fedor and he’s over there talking to [his translator] Snow White.”

Fighting one of the greatest

The semi final fight which is expected to take place in March is one of the most anticipated fights of the Bellator Grand Prix, with Fedor Emelianenko considered one of the greatest heavyweight fighters of all time and Chael Sonnen being a polarizing figure in the world of Mixed Martial Arts due to his trash talking. Chael has also faced other great fighters like Anderson Silva and Jon Jones, dominating Anderson till he was submitted and also coming close to win against Jon Jones due to injury.

“I’ve always been aggravated with the prima donnas of this sport, and they’re everywhere,” Sonnen said. “That’s the reason I go after the guys I go after. As soon as I see a guy who is perceived to be better than everyone else and no one is calling him out because they’re a bunch of cowards, I set an example and find that guy nobody wants to mess with. The last John Wayne in town needs to step up, and I realize that’s me.”

Not a walk in the park

Even after all of his trash talk, Chael does not expect the fight with Fedor to be easy, but that does not bother him. Chael believes he possesses some qualities that past opponents of Fedor did not.

“Fedor has very bad intentions. He has power in his punches that others, myself for example, just aren’t born with,” Sonnen said. “I’ve seen him work out, doing things in a way coaches wouldn’t tell you to do it, but he’s a very, very special athlete.

Bellator MMA: Fedor Emelianenko reveals whether or not he considered retirement after loss to Matt Mitrione