Bellator featherweight champion Julia Budd is all set to fight top undefeated contender Olga Rubin at Bellator 224 which is taking place at the  WinStar World Casino in Thackerville, Oklahoma on July 12.

Even though Julia Budd has her hands full with fighting Rubin, she talked about potential future fights and with her latest four-fight deal with the Bellator, she wants to fight Gabi Garcia who fights out of Japan-based Rizin FF organisation. 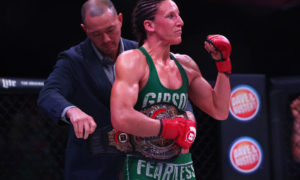 So far the 36-year old Bellator star is riding on a 10-fight winning streak with her last loss coming to Ronda Rousey at Strikeforce challenger-20 back in 2011. On the other hand, Gabi Garcia is undefeated as a pro and has compiled a record of 6-0, 1 NC.

The fight, however, makes little sense, as Gabi Garcia stands at 6’2″ tall and weighs in at 220 pounds. Garcia has a 75 pounds weight advantage over Julia Budd. But the Bellator champ insists on fighting Garcia in a recent interview with the MMA Junkie.

“Definitely (I’d like that fight),” Budd told MMA Junkie. “Lance Gibson (who is) my trainer, coach, husband; when he first started he was fighting guys that were over 100 pounds bigger than him back in the day. Those fights always kind of were exciting to me. It’s like, ‘OK, I want to see how my martial arts skills fair against someone that’s double my size.’ I think that would be really exciting.”

“I think she’s well rounded,” Budd said. “I’ve studied her style and see where my strengths are. I’m really excited. I think it’s the perfect type of opponent for me.” (H/T – MMA Junkie)