Bellator: Dillon Danis feels a fight against Ben Askren would mean an easy submission for him 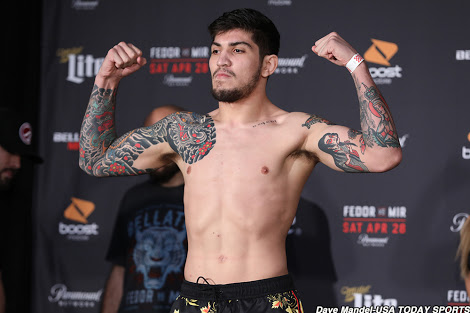 BJJ superstar and Conor McGregor’s training partner Dillon Danis made his MMA debut at Bellator 198 against Kyle Walker. Dani’s certainly didn’t lack confidence going into the fight and that reflected in his performance as he made quick work of Walker. He absorbed some shots but then it was just ground game and Danis managed to lock in a toe lock to earn his first professional MMA victory.

Danis called out, undoubtedly an MMA legend, Ben Askren. Askren though retired has shown some interest in the past in super-fights against the likes of Georges St-Pierre. Askren was a former Olympic wrestler and Bellator and ONE FC champion. Even if it being a big step up, Danis feels fairly confident in his chances. Danis in an interview with Ariel Helwani on the MMA hour, feels that he believes the fight would go very well for him.

Danis claims he has already announced himself as a contender.

Bellator MMA: Fedor Emelianenko not intimidated by the trash talk of Chael Sonnen and size of Frank Mir

Bellator MMA: Dillon Danis says that he is too good, calls out Ben Askren

Previous articleUFC: Brad Tavares vs Israel Adesanya set as a main event for TUF 27 Finale in July
Next articleBoxing: Errol Spence to defend his IBF welterweight title vs Carlos OCampo on June16th